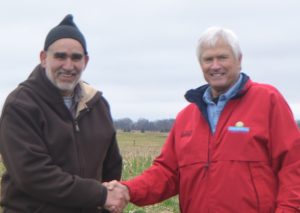 Carney, a cattle grazier, and Kimberley, a row crop farmer worked together to contract graze cover crops in a 61 acre row crop field

Soil compaction and lack of fence are often identified by farmers as the two major barriers to grazing cover crops. While soil compaction can reduce crop productivity, issues can be avoided with proper management.[1] It is possible to graze cover crops with no adverse effects to the soil or the cash crop[2] – in fact, research shows that grazing cover crops can alleviate soil compaction.[3] Best management practices, such as avoiding excessive grazing during wet and muddy conditions and moving water sources on a regular basis reduce the risk of compaction.[4]

The Pasture Project, Practical Farmers of Iowa, Sustainable Farming Association and Land Stewardship Project partnered on a four-year NRCS-USDA Conservation Innovation Grant to demonstrate the economic and soil health benefits of livestock grazing on cover crops. Concluding in 2018, the study worked with eight farmers in Minnesota and Iowa to conduct on-farm research on over 600 acres. 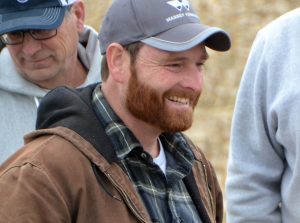 Three Iowa farmers participated – Bruce Carney and Rick Kimberley of Maxwell and Wade Dooley of Albion. The study compared soil compaction in conventionally managed row crop fields where no cover crops were planted and no grazing occurred (control) with fields where grazing of cover crops occurred (treatment). Carney, a cattle grazier, and Kimberley, a row crop farmer are neighbors who worked together to contract graze the cover crops. Dooley grazed cattle on his father Alan’s row crop fields “If we’re getting some benefit out of it on the agronomy side, and Bruce is getting something out of it on the cattle side, I think it’s a good working relationship,” said Kimberley.

Objective: To compare soil compaction levels in row crop fields with no cover crops to fields where cover crops were planted and grazed by cattle.

Both farms planted a six-species cover crop mix which included brassica, legume and grass species on no-till corn and soybean fields that had never been planted with cover crop prior.

Cover crops were either aerially applied in September or dilled in October each year from 2015 to 2017. Farmers grazed cover crops with cattle as forage was available and as weather allowed; stocking densities, stocking rates and timing of grazing periods varied. Cattle were fenced into cover crop fields using temporary, high-tensile, electrified fence. Water was provided in mobile troughs and supplemental hay was fed when needed.

Soil compaction was determined using an AgraTronix penetrometer (Streetsboro, OH). The penetrometer measured the amount of pressure it took to penetrate through the soil profile; this data is reported in pounds per square inch (PSI) of pressure. The amount of pressure required is directly related to the level of soil compaction. Penetrometer measurements were taken in the second week of June each year from 2015 to 2018. Ten measurements were taken in both control and treatment fields each year, at depths of 3, 6, 9 and 24 inches. Predominant soil types are Clarion and Nicollet at Carney-Kimberley’s and Downs silt loam at Dooley’s.

At both locations, four years of data show that grazing cover crops did not contribute to soil compaction in row crop fields (Figures 1 and 2). Baseline penetrometer readings were taken in 2015, showing both sets of fields at Carney’s and Dooley’s started with similar compaction levels. As the study progressed, compaction increased in the fields without cover crops or grazing. Compaction did not increase in the fields with cover crops that were grazed. As indicated by the asterisks in the figures, by 2018, statistical analysis determined higher levels of soil compaction where no cover crops were planted or grazed at all depths at Carney’s (Figure 1) and at 9 and 24 in. at Dooley’s (Figure 2). Dooley commented, “To begin with I was a little concerned that cows’ hooves would cause some compaction, but according to these results, it looks like that isn’t the case because the cover crops mitigate any issues the cows are causing.” 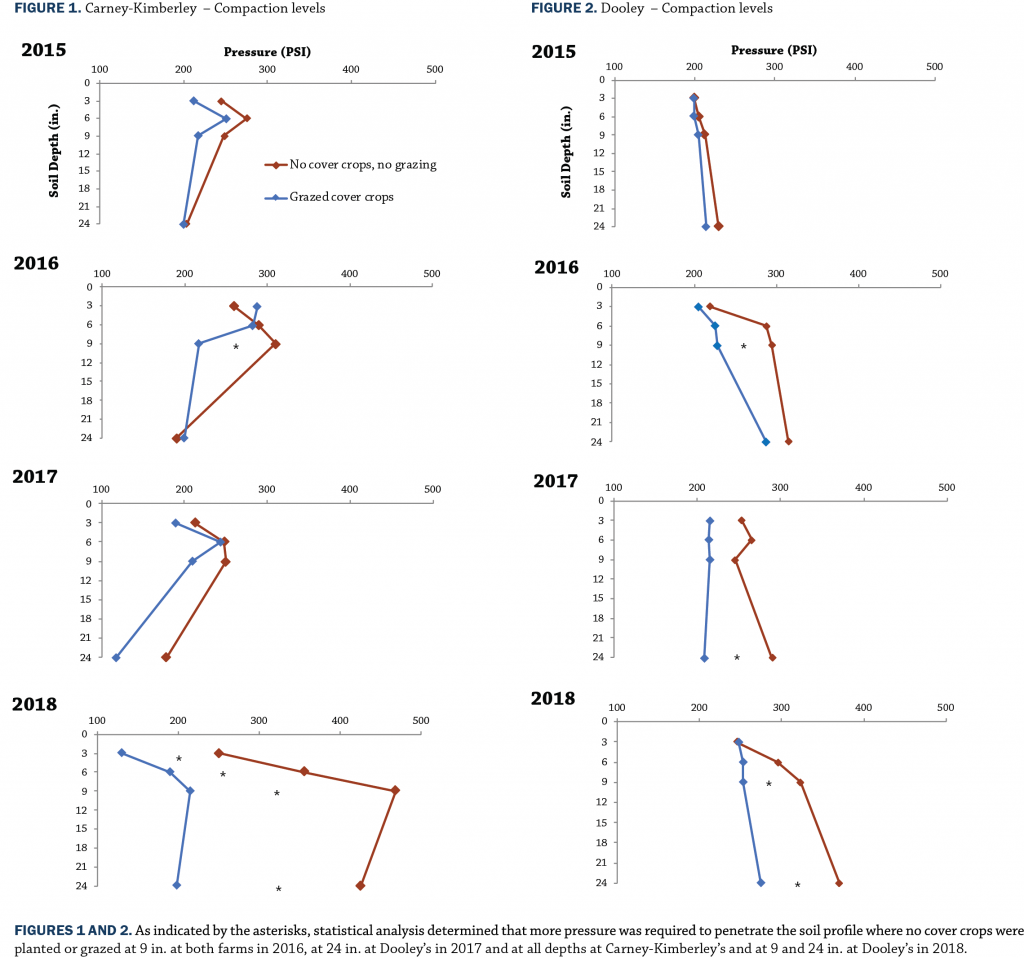 Under Carney and Kimberley’s contract grazing agreement, best management practices were employed in order to avoid compaction. Bruce explained, “Rick’s biggest concern is compaction. Our deal is if it gets too wet, I move my cows off. If we get a half inch of rain or more, I usually move cows back onto my farm for a day, let it soak in and then go back out. That’s part of the conversation you’ve got to have. It has to work for everybody.”

Cover crop grazing took place on cover crop (treatment) fields for a varying number of days each fall and spring over the course of the study (Table 1). While grazing cover crops, cattle had access to crop residue and were supplemented with hay as needed. In some years, cover crops were not grazed due to weather and soil conditions. 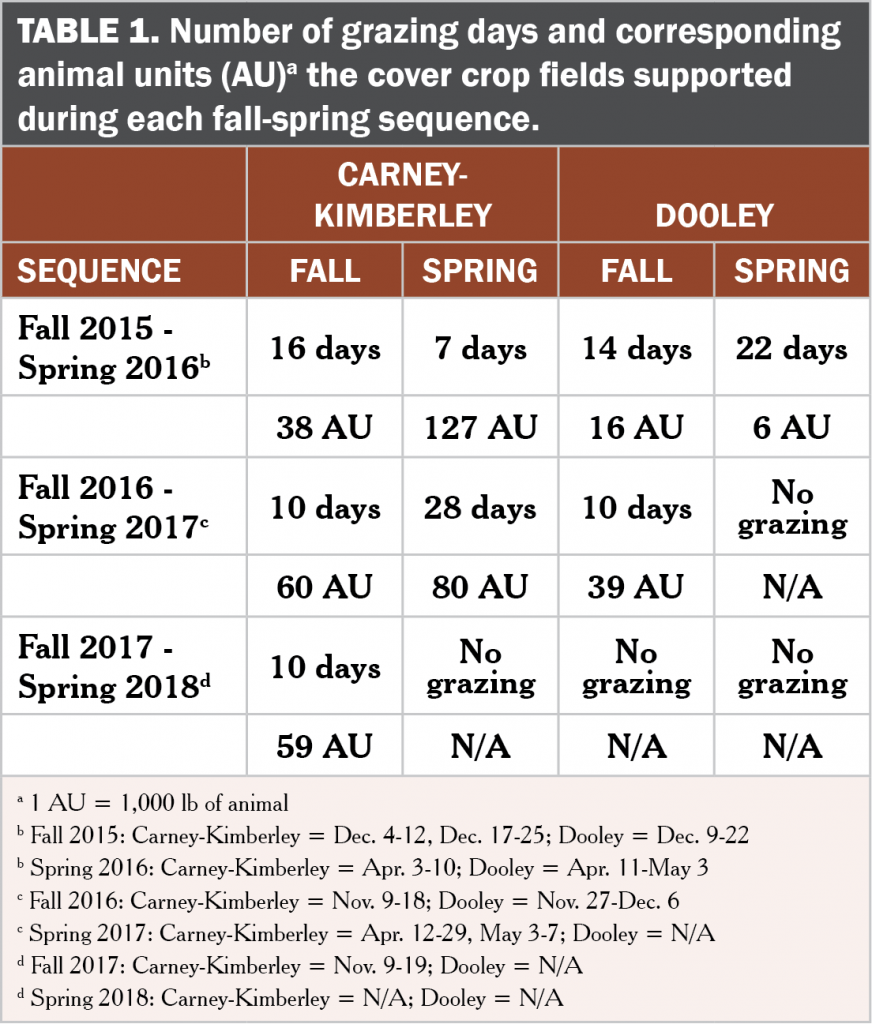 This project was not designed to specifically test the effect of grazing cover crops on corn and soybean yields. Average corn and soybean yields from the fields involved at both farms over the course of the study as well as the associated five-year county averages[5] are shown below. However, bulk harvesting of fields at both farms precluded statistical analysis (no replications) and prevented scientific comparisons of the yields between control and treatment.

Cover crops after 12 hours of grazing (right). Kimberley’s 61-acre field was divided in eight temporary paddocks with one strand of electrified high-tensile wire and rotationally grazed.

Both Carney and Dooley grazed cover crops in the fall and springs of 2015 through 2018, when weather allowed. On both farms, grazing cover crops in row crop fields resulted in lower levels of soil compaction than fields with no cover crops and no grazing (Figures 1 and 2).

The results of this study eased the farmer’s concerns of compaction. “Rick and I will keep the relationship we have and we’ll keep working on it,” said Carney about contract grazing Kimberley’s fields. “Rick is seeing benefits from cover crops, like weed suppression and less chemical use, and grazing days are a benefit to me. One thing that could help both of us in the long run is to have a long-term lease agreement that extends beyond this project.” Carney has also suggested Kimberley to plant shorter-season crop varieties in order to get more grazing days out of the cover crop. 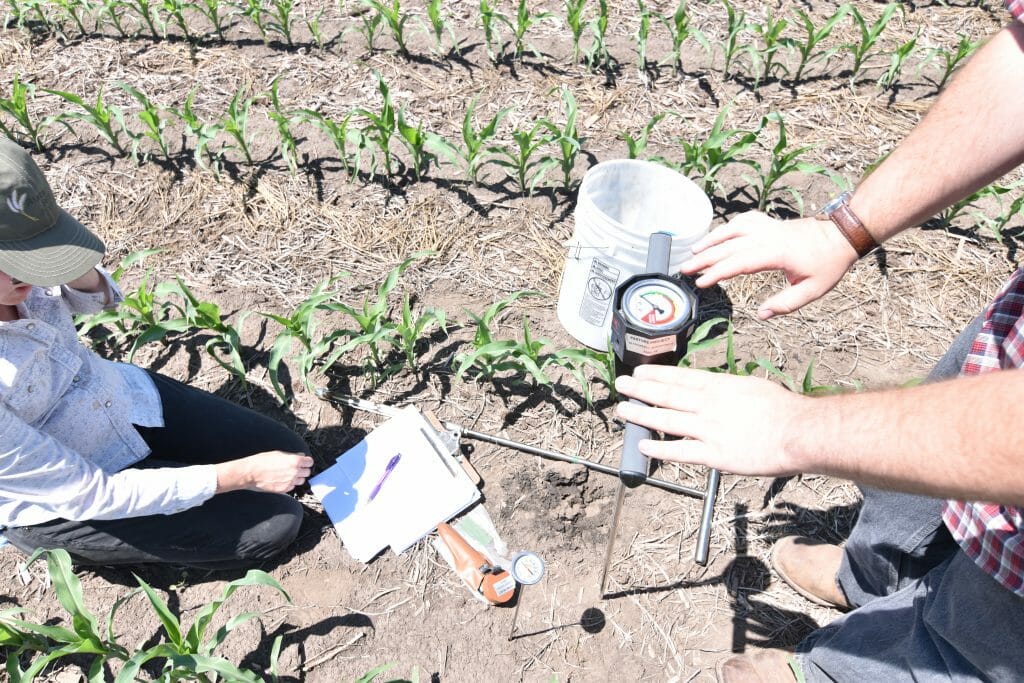 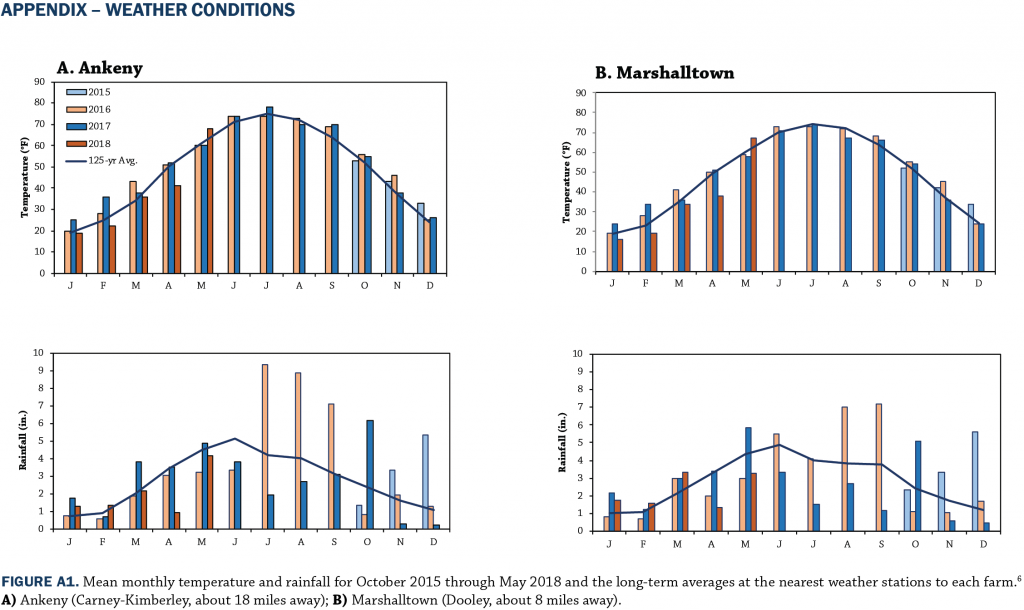