While early planting of soybeans is important to maximize yield potential, in Iowa it has not been considered a possibility with organic, no-till soybeans.[1] Forgoing the use of tillage and herbicides in organic, no-till soybeans makes cover crops such as cereal rye essential for weed control; however, without herbicides, termination of cereal rye has proven tricky to manage. Mowing and roller-crimping are two organic-approved, no-till options for terminating cereal rye. To effectively kill the cereal rye they must be done during the period when cereal rye reaches anthesis, but this growth stage does not occur in Iowa until late May or early June.[2,3] The logical assumption has been that planting soybeans in advance of cereal rye anthesis and subsequent roller-crimping to maximize earliness would result in termination of not only the cereal rye but the soybeans too. Thus, it was accepted by many that organic, no-till soybeans could not be planted in Iowa until late May – the time when cereal rye reaches anthesis and can be roller-crimped.[4] 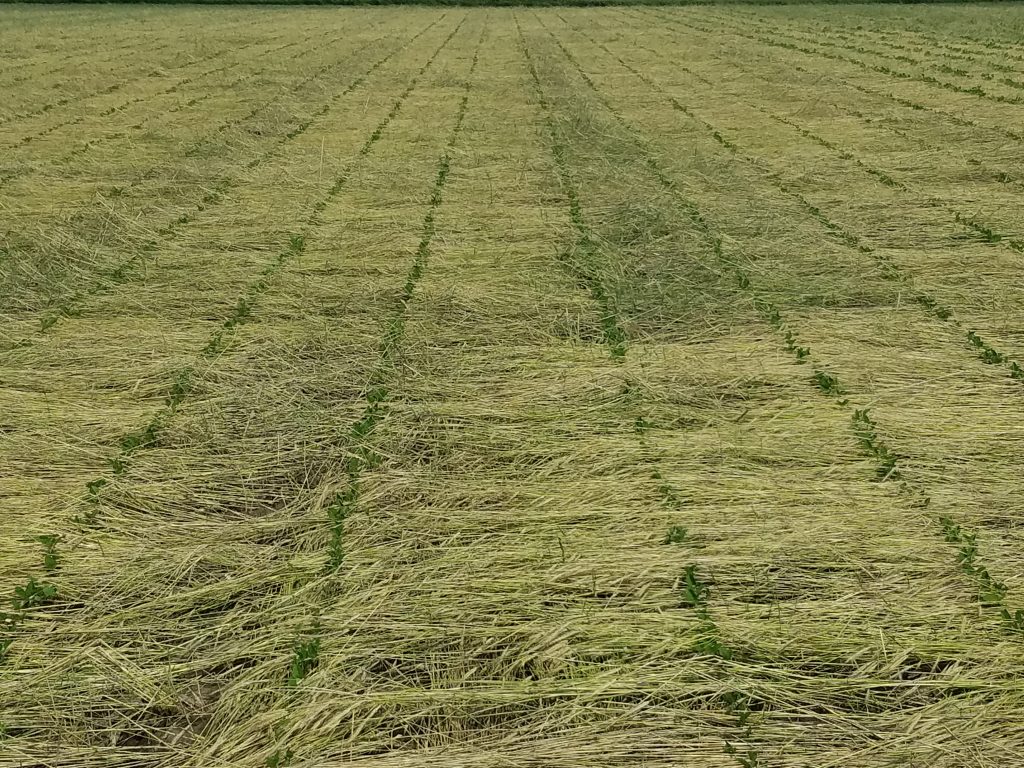 Soybeans on June 15, 2018 – 23 days after planting. Soybeans were planted into standing cereal rye in 30-in. rows on May 23 and roller-crimped on June 5 to terminate the cereal rye.

In a separate experiment, Shriver also wanted to compare yields between soybeans drilled in narrow, 7.5-in. rows and soybeans planted in wide, 30-in. rows. Shriver anticipated that the yield gains associated with narrow versus wide rows might not be as impactful as other studies have found[7] due to his planter’s sophisticated down-force system and its ability to better singulate seed and achieve better depth control. Shriver also liked the idea of having the option to cultivate weeds in his 30-in. rows if needed.

Objective: Maximize earliness of planting and minimize reductions to yield and plant stands by determining the best row width for no-till soybean as well as the ideal time for planting prior to roller-crimping cereal rye.

Two experiments were conducted by Scott Shriver near Jefferson in Greene County, Iowa, on certified organic land to investigate the impacts of seeding date and row-width on soybeans planted in roller-crimped cereal rye

Treatments in the soybean seeding-date experiment included soybeans planted 17, 13 and 0 days before termination (DBT) of the cereal rye. Treatments were replicated four times in 40-ft-wide by approximately 1,100-ft-long strips arranged in a randomized complete block design.

Cereal rye (cv. Aroostook) was planted at a rate of 3 bu/ac in all strips on Oct. 20, 2017, using a box drill. Soybeans were planted in both treatments into living cereal rye the following spring, on May 23, 2018, at a rate of 175,000 seeds/ac in both treatments. Thirteen days later, on June 5, cereal rye was terminated with a roller-crimper. Prior to termination, biomass was sampled for drying and weighing. Strips with 30-in. rows were cultivated on July 27 and both treatments were hand-weeded on August 2. Stand counts were done on Aug. 10 before harvesting from the whole width of each strip on Oct. 24. 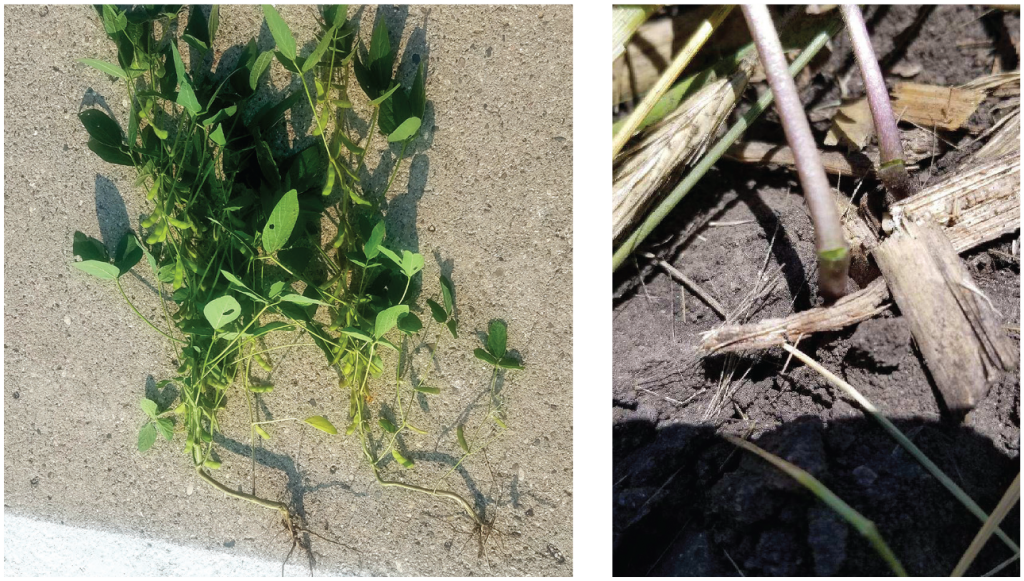 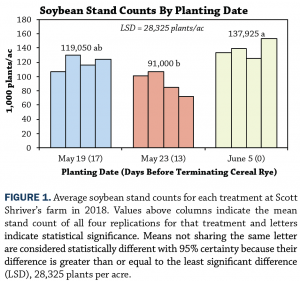 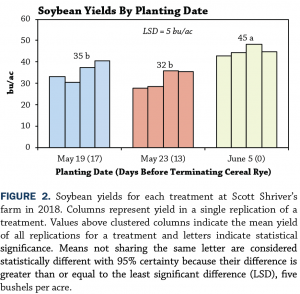 Soybean yield followed a similar, but not identical, trend to soybean stand counts. Soybeans planted zero DBT yielded 45 bu/ac, which was significantly greater than yields in soybeans planted 17 and 13 DBT (Figure 2). Yields of soybeans planted 17 and 13 DBT were statistically similar and yielded 35 bu/ac and 32 bu/ac, respectively. Despite above-average rainfall in May and June (Figure A1),[8] competition with the living rye into which soybeans were planted in the 17- and 13-DBT treatments is likely the cause of lower yields in those treatments. Yields in all three treatments were lower than the 2018 average for Greene County – 57 bu/ac.[9] The average amount of cereal rye biomass at each planting date was 4,273 lb/ac on May 19, 6,386 lb/ac on May 23 and 9,531 lb/ac on June 5 (Figure 3). Snapped seedlings and plant damage from roller-crimping may also be a cause of yield loss in the earlier plantings. 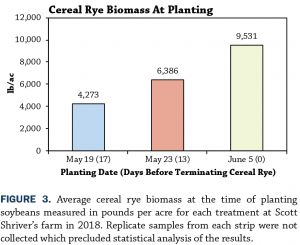 Yields in the soybeans drilled in 7.5-in. row-widths averaged 41 bu/ac and were statistically greater than yields in soybeans planted in 30-in. row-widths, which averaged 33 bu/ac (Figure 4). This is consistent with the findings from a broad pool of research showing narrow row-width has a positive effect on soybean yield.[7,10,11] Shriver did not cultivate the soybeans drilled in 7.5-in. row-widths, which saved approximately $13.50/ac in that treatment according to the 2018 Iowa Farm Custom Rate Survey.[12] Similar to the soybean seeding-date experiment, yields in this experiment were lower than the 2018 Greene County average of 57 bu/ac.[9] Cereal rye biomass averaged 5,258 lb/ac at the time of termination, which occurred 13 days after planting soybeans. 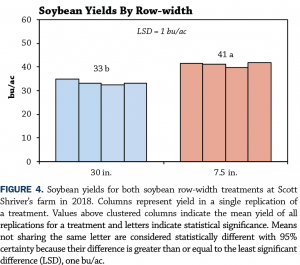 The average stand count of soybeans planted in 7.5-in. row-widths (129,700 plants/ac) was statistically greater than the average stand count of soybeans planted in 30-in. row-widths (77,425 plants/ac) (Figure 5). The reasons for the difference in plant populations is unclear as soybean seeding rates were equal for both treatments. One potential factor contributing to the difference is the planting method used in each treatment – drill for 7.5-in. row-width and planter for 30-in. row-width. However, Shriver commented, “We did not notice anything at planting time that indicated a poorer planting from the 30-in.-row planter. It has a sophisticated down force system to get the seed in the ground that the drill does not have.” Shriver also remarked that neither planter type had difficulties planting through the cereal rye. Furthermore, soybeans and cereal rye in both treatments were roller-crimped at the same growth stage, ruling out the possibility of any differences in damage to soybeans caused by roller-crimping. 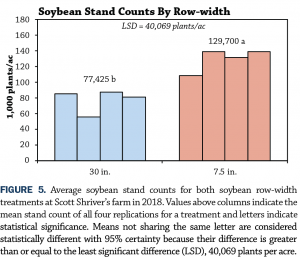 The benefits of early planting were not achieved when soybean planting and emergence preceded roller-crimping of cereal rye. The seeding-date experiment showed benefits to yield and plant population when soybeans were seeded on the same date of roller-crimping the cover crop (June 5) compared to seeding 17 or 13 days in advance on May 19 or 23, respectively. These results are likely due to damage to soybean seedlings caused by the roller-crimper and due to competition with living cereal rye during the period between planting soybeans and terminating rye in the treatments planted 13 and 17 days before roller-crimping. 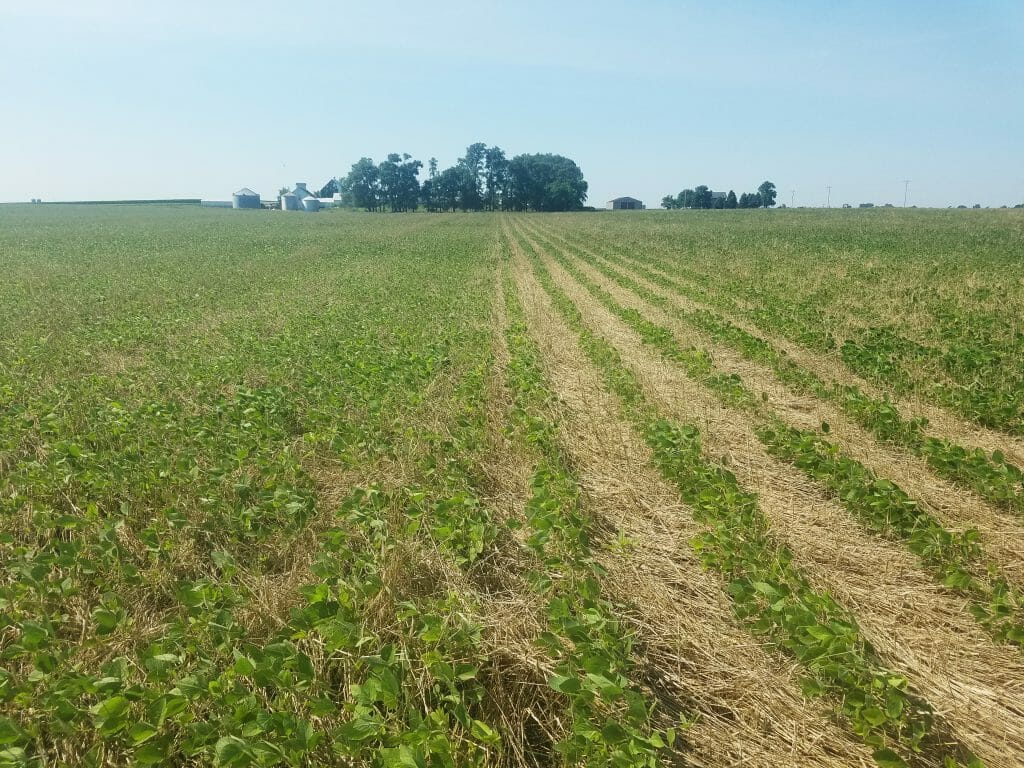 Narrow row-width proved to be superior in Shriver’s farming system. Drilling soybeans in 7.5-in. rows resulted in greater yields and plant populations than planting in 30-in. rows. As an added benefit, Shriver was able to avoid cultivating soybeans in the 7.5-in. rows – likely owing to faster canopy closure that shades out weeds. Shriver was surprised to see such an improvement in yield from drilling in narrow rows.

Prior to running these experiments, Shriver hoped to learn which soybean seeding dates and row-widths might work best on his farm for roller-crimping cereal rye in no-till, organic soybeans. Based on the results of this study he plans to drill soybeans in 7.5-in. row-widths and wait to plant soybeans until closer to the date of roller-crimping cereal rye. Shriver looks forward to repeating the experiment again in 2019 to see if he gets the same results.

Figure A1. Mean monthly temperature and total monthly rainfall for Nov. 1, 2017, through Oct. 31, 2018, and the 50-year averages. Data are provided from the Jefferson, IA, climate station located approximately 1 mile from the study site.[8]