This project is supported in part by the Iowa Department of Agriculture and Land Stewardship, Division of Soil Conservation and Water Quality.

Spring-seeding cereal rye in soybeans is an appealing idea for organic row-crop producers who, due to weather or other uncontrollable circumstances, may be prevented from fall-seeding a cover crop for spring weed control. The practice appealed to Margaret Smith and Doug Alert as a means to improve weed control when conditions in June prevent them from building ridges in corn where soybeans will follow in their rotation. It appealed to Robert Alexander as a means to reduce tillage in his organic soybeans while also keeping the soil covered.

Margaret Smith and Doug Alert’s soybean crop followed corn, with no fall tillage. Spring weed control preceding the start of this experiment included disking on May 16, 2019, followed by a field finisher pass on June 7. Soybeans were planted on June 8 in 30-in. row spacing at a population of 180,000 seeds/ac. Treatment strips were established the same day by drilling rye immediately after planting soybeans but at a shallower depth and in 7.5-in. row spacing. Treatments consisted of two seeding rates of rye – 170 lb/ac (1,965,880 seeds/ac) and 220 lb/ac (2,544,080 seeds/ac). Treatments were arranged in a randomized complete block design with each treatment randomly assigned to one strip per block. Blocks were replicated seven times for a total of 14 strips, and strips measured 1,104 ft by 15 ft (0.38 ac). Subsequent weed control included row cultivation with cut away disks and a single sweep on July 15 and July 20 in all strips. 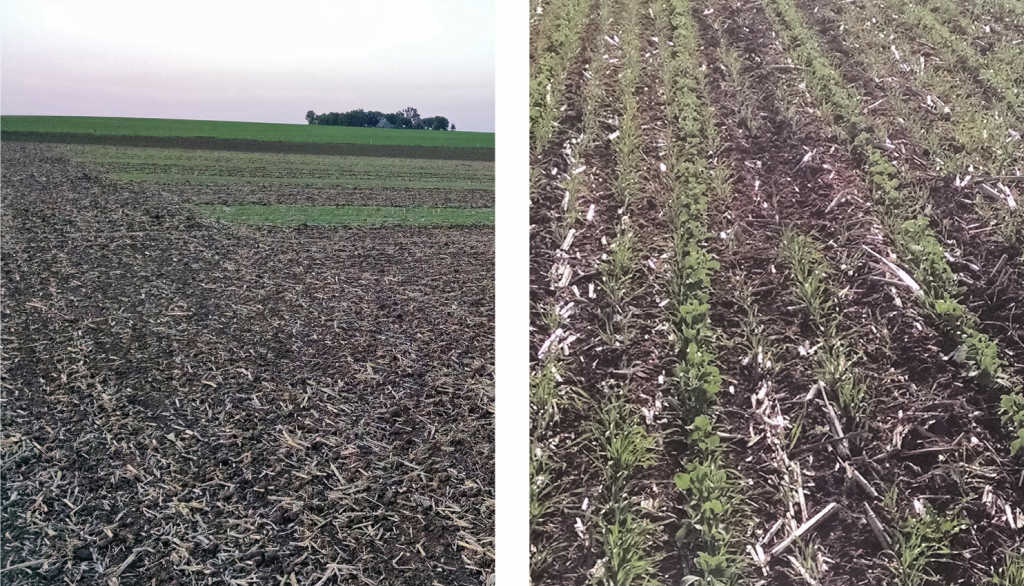 Robert Alexander intended to compare three treatments on his farm: early-seeded cereal rye, late-seeded cereal rye and a no-rye control. To effectively compare seeding dates of cereal rye, the target seeding rate was to be identical in both treatments with spring-seeded rye; however, equipment error resulted in different seeding rates of 48 lb/ac in the early-seeded rye strips and 62 lb/ac in the late-seeded rye strips. Furthermore, heavy weed pressure necessitated tillage in strips with the late-seeded rye but not in strips with early-seeded rye. As a result, Alexander’s trial focuses on comparisons between weed management systems with different cereal rye seeding rates and dates and tillage regimes. Field management for each of Robert Alexander’s three weed management treatments is summarized in Table 1. Treatments were arranged in a randomized complete block design with each treatment randomly assigned to one strip per block. Blocks were replicated four times for a total of 12 strips, and strips measured 100 ft long by 20 ft wide. The previous crop was corn. 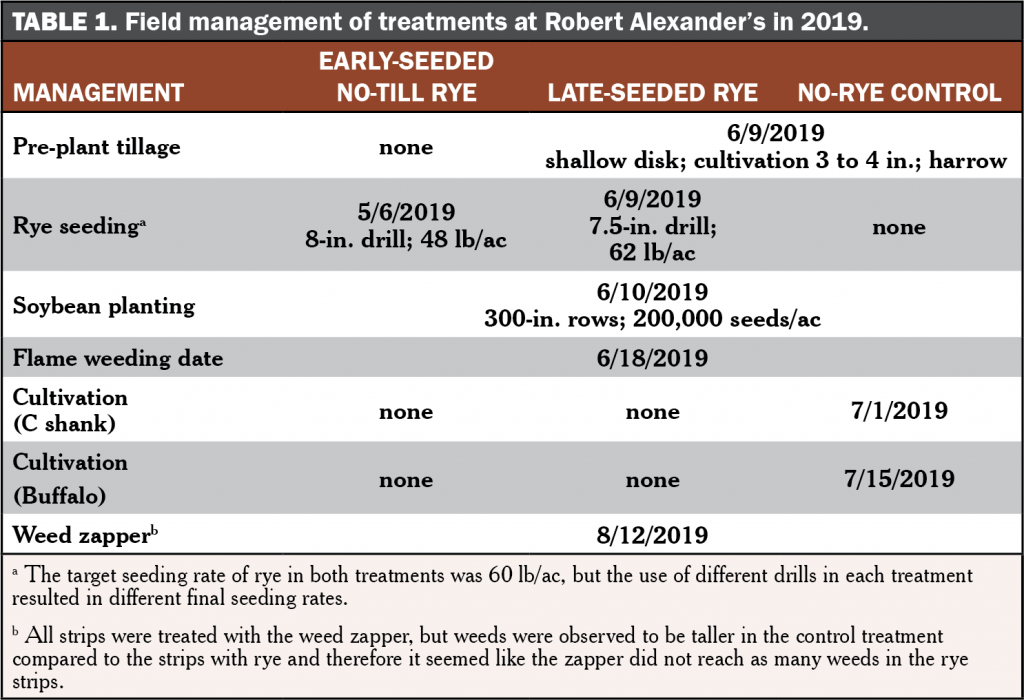 Cereal rye and weed biomass were collected at Smith and Alert’s on July 15, prior to cultivation on July 15 and July 20. Biomass was sampled by randomly placing three quadrats (30 in. by 15 in.) in each strip and clipping the non-soybean plant matter at the soil line. Biomass was separated into weeds and cereal rye then dried and weighed.

Soybeans were harvested in each strip at Smith and Alert’s on Oct. 18 and at Robert Alexander’s on Oct. 28. Yields were recorded for each strip and adjusted to standard moisture.

Soybean stand counts were carried out at Smith and Alert’s on Oct. 19, one day after harvesting soybeans. 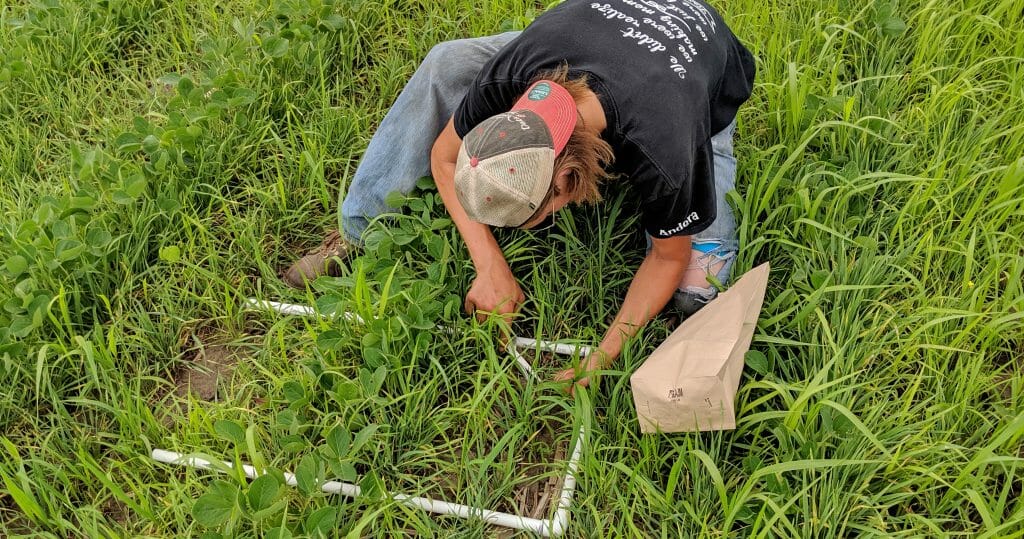 The seeding rate of cereal rye had no impact on rye biomass or weed biomass at Smith and Alert’s (Figure 1). Average rye biomass measured 43.3 lb/ac in the strips with rye seeded at the low rate and 42.1 lb/ac in the strips seeded with the high rate. Average weed biomass in the strips seeded at the high and low rate measured 10.2 lb/ac and 8.8 lb/ac, respectively. Though these weed biomass measurements were low on the July 15 sampling date, grassy weeds grew rapidly after that date. As noted by Smith and Alert, neither treatment provided satisfactory grass weed control. High weed pressure necessitated cultivation of all plots on July 15 and on July 20. Predominant weeds observed at Smith and Alert’s included foxtail with some lady’s thumb smartweed, velvet leaf and common ragweed.

Figure 1. Cereal rye and weed biomass in in each treatment and replication at Margaret Smith and Doug Alert’s farm in 2019. Numbers above grouped columns indicate the average biomass of all seven replications for that treatment and letters indicate statistical significance. Means sharing the same letter are considered statistically similar with 95% certainty because their difference is less than the least significant difference (LSD). Click to enlarge.

Robert Alexander also observed high grass weed pressure throughout his experiment site, which began in the first rep and lessened toward the third rep. Based on a visual observation at the time of soybean harvest, Alexander felt weed pressure was greatest in the strips with the later-seeded rye, which included mainly pigweed and waterhemp. 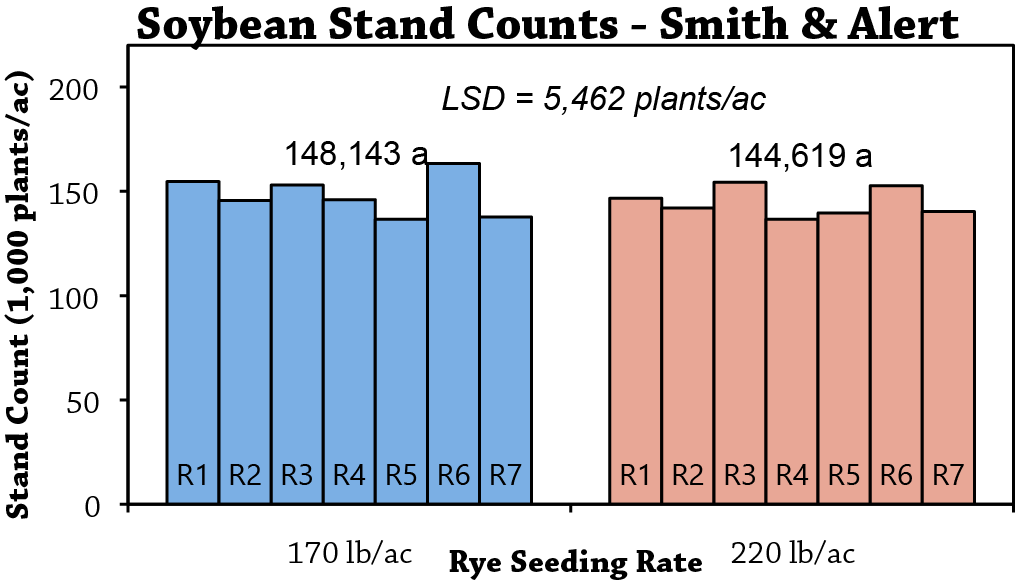 Figure 2. Soybean stand counts in each treatment and replication at Margaret Smith and Doug Alert’s farm in 2019. Numbers above grouped columns indicate the average stand count of all 7 replications for that treatment and letters indicate statistical significance. Means sharing the same letter are considered statistically similar with 95% certainty because their difference is less than the least significant difference (LSD).

Soybean yield at Smith and Alert’s was statistically similar between both rye seeding rate treatments – 19.2 bu/ac in the strips seeded with the low rate of rye and 18.7 bu/ac in strips seeded with the high rate (Figure 3). Smith and Alert were very disappointed by low yields in both treatments and attribute low yields to very heavy grass weed pressure with which the cereal rye was unable to successfully compete. In addition, soil movement into the soybean rows from cultivation prevented harvest of the low-set pods on the soybean plants. Further analysis of the system led Smith and Alert to believe that, due to an alteration in their typical crop rotation sequence, they should have selected a soybean variety with soybean cyst nematode resistance for the trial.

Figure 3. Soybean yield in each treatment and replication at Smith and Alert’s and at Robert Alexander’s farm in 2019. Numbers above grouped columns indicate the average yield of all replications for that treatment and letters indicate statistical significance. Means sharing the same letter within an experiment are considered statistically similar with 95% certainty because their difference is less than the least significant difference (LSD). Click to enlarge. 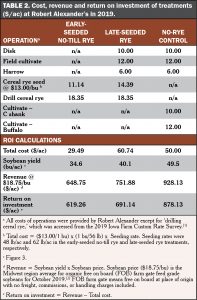 Constrained by the challenge of seeding cereal rye early enough in the fall to develop an adequate stand for rolling in the spring or ridging the previous corn crop in preparation for ridge planting soybeans, Smith and Alert hoped spring-seeding cereal rye would afford them the opportunity to still utilize a cover crop to control weeds with less labor and tillage. Smith and Alert found neither of the two seeding rates compared on their farm provided adequate weed control in the presence of high grass weed pressure and stated, “The soybean yield and income loss was extremely disappointing.” A nearby soybean field planted the same day, with the same soybean variety, but managed with mechanical weed control, yielded more than twice that of the trial field. Based on their experiences and the results of this trial, Smith and Alert feel spring-planted rye is not an appropriate response to their challenges without some change to the system. Tine weeding both the rye and soybeans very early may be a strategy to help control grass weeds. Other farmers have used this strategy successfully up to three times during early crop growth.

Robert Alexander’s goal was to find ways to reduce soil disturbance annually on his farm, and despite heavy grass weed pressure in this experiment, Alexander’s view is that spring-seeding rye one month before planting soybeans will be a good option to reduce tillage on his farm in areas where grass weed pressure is less heavy. Robert Alexander plans to spring-seed cereal rye ahead of soybeans again on a few acres in the coming years. 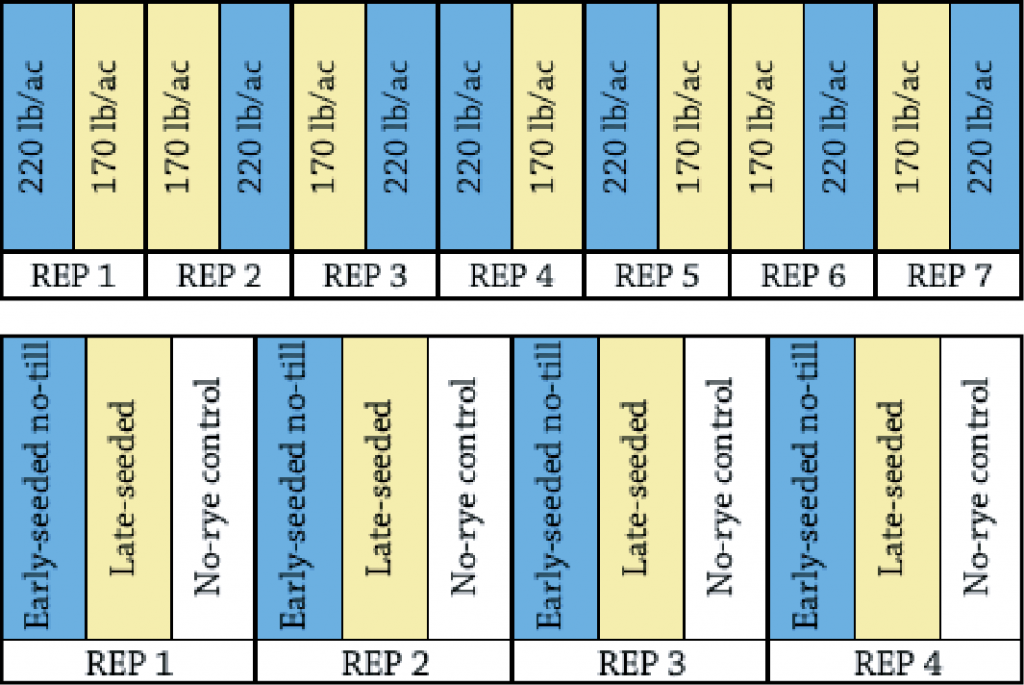 Figure A1. Experimental designs used by Smith and Alert (top) and Alexander (bottom). The designs include at least four replications of each treatment. The designs allow for statistical analysis of the results. 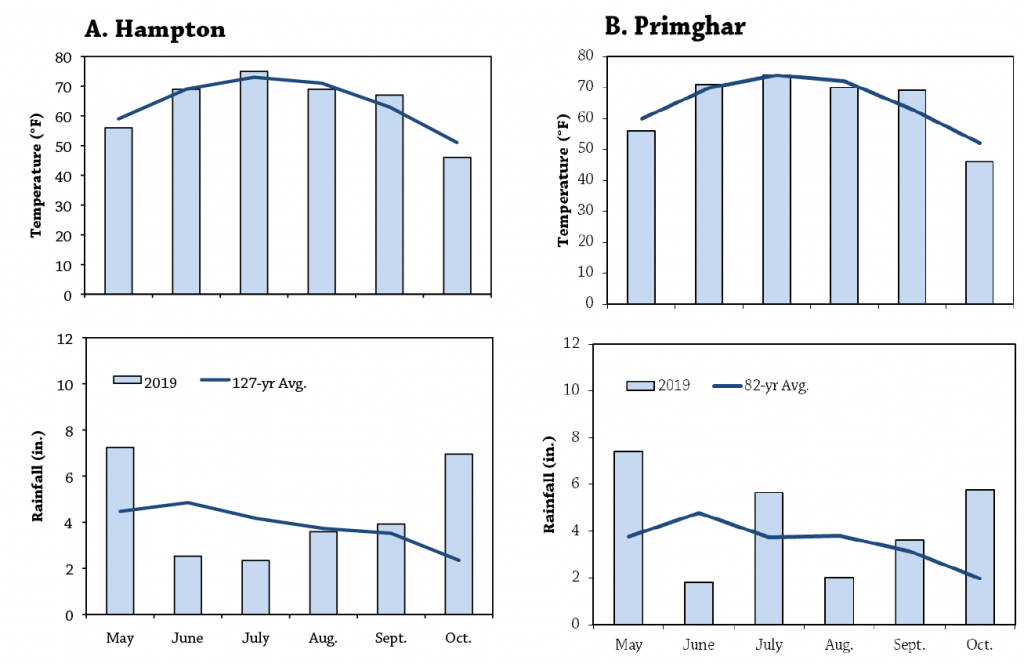 Figure A2. Mean monthly temperature and rainfall for 2019 and the long-term averages at the nearest weather stations to each farm.[3] A) Hampton (Smith and Alert, about 0 miles away); B) Primghar (Alexander, about 15 miles away.)