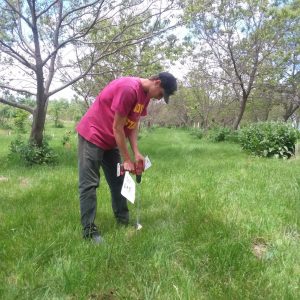 The tea bag method is a cost-effective and standardized method to measure the decomposition rate of organic matter in soils.[1] Some research warns that certain ecosystems may not be as well suited to the method (such as marshes)[2], and that comparisons between ecosystems may not be prudent, due to differing temperature and moisture availability.[1] For this trial, Kathy Dice buried tea bags in perennial, agroforestry systems, and also buried tea bags in one conventional corn/soy field.

Dice buried four green and four black tea bags at each of six sites: four different agroforestry sites, a stand of native timber and a conventional corn/soy field. The agroforestry sites were each in a different growth stage and with different management histories, shown in Table 1. Each pair of green and black tea bags were buried 10 in. apart, 3-4 in. deep and flagged for easy retrieval. All tea bags were buried on June 24 and retrieved on August 14 (buried for 51 days). Dice weighed tea bags at the start of the trial, and at the end of the trial after they were cleaned of debris and dehydrated.

To examine the effect of site on tea decomposition (soil health), we calculated Tukey’s least significant difference (LSD). If the difference in percent mass loss of tea among treatments was greater than or equal to the LSD, we confirm that the treatment (burial site) had a statistically significant effect. On the other hand, if the difference in tea bag mass loss was less than the LSD, we consider the treatments to be statistically similar. We used a 90% confidence level to calculate the LSDs, which means that we would expect our rankings to occur 9 times out of 10. We could make these statistical calculations because the Dice’s experimental design involved replicated samples (tea bags) collected from each site.

Dice encountered three issues during the tea bag trial which she felt impaired the usefulness of the data. First, raccoons dug up several bags, which Dice re-buried the next day. Second, after being buried for 51 days, several tea bags were opening along the seams, and many had extensive rootlets growing through and among the nylon mesh of the tea bag. Dice gently removed as many of the rootlets as possible and dried the tea bags in a dehydrator before the final weighing.

Third, while doing the post-burial weighing, Dice’s scale was giving imprecise measurements – that is, giving different weights for the same tea bag on consecutive measurements varying by as much as 0.58 g. For a time she recorded the average of three weighings, but eventually switched to an older scale that gave more consistent readings, though only to tenths of a gram, rather than hundredths. 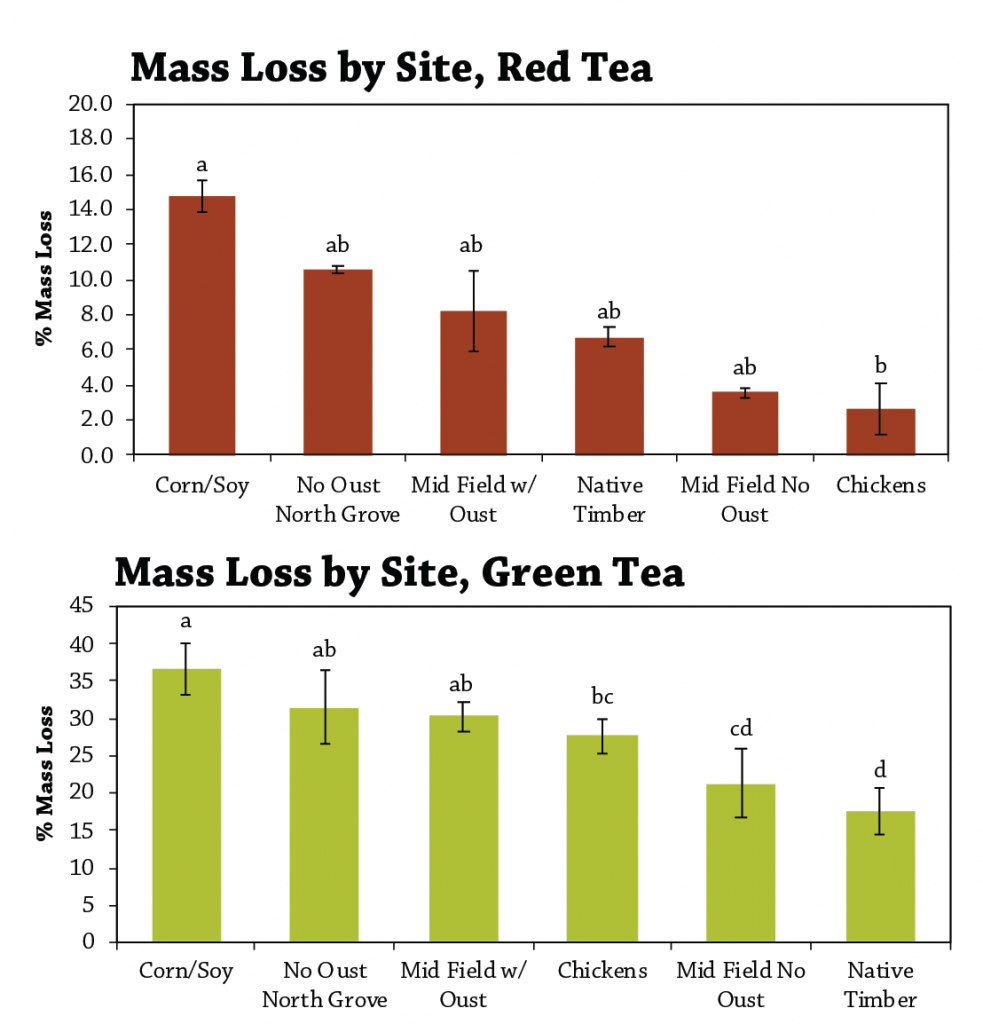 Raccoon disturbance is not uncommon in this type of trial, but the extent of the rootlet growth in the tea bags from several of the agroforestry sites was more than researchers at Iowa State University had ever seen.[3] Other researchers noted in their publication that they “did not observe substantial accumulation of roots and fungal biomass.”[1]

The trouble with scale was very problematic. Dice and PFI staff decided to analyze the data despite these issues, and in future will ensure accuracy of the scale, and will also adjust the protocol to avoid such extensive rootlet growth.

Figures 1 and 2 show the mean mass loss, by percent, of green and black tea bags at each site (data table is available in Table A2). More mass loss in the tea bag equates to more decomposition of the tea, which suggest more soil biological activity. Because green tea has a lower C:N ratio than black tea, it is more readily decomposable by soil microbes and we expected to observe more mass loss of green tea across the sites.

These results show that there was very little statistical difference in the mass loss, particularly with the black tea. Interestingly, the corn/soy treatment had the most mass loss for green and black tea. Dice is particularly curious if the rootlet growth in the agroforestry bags influenced their final mass. 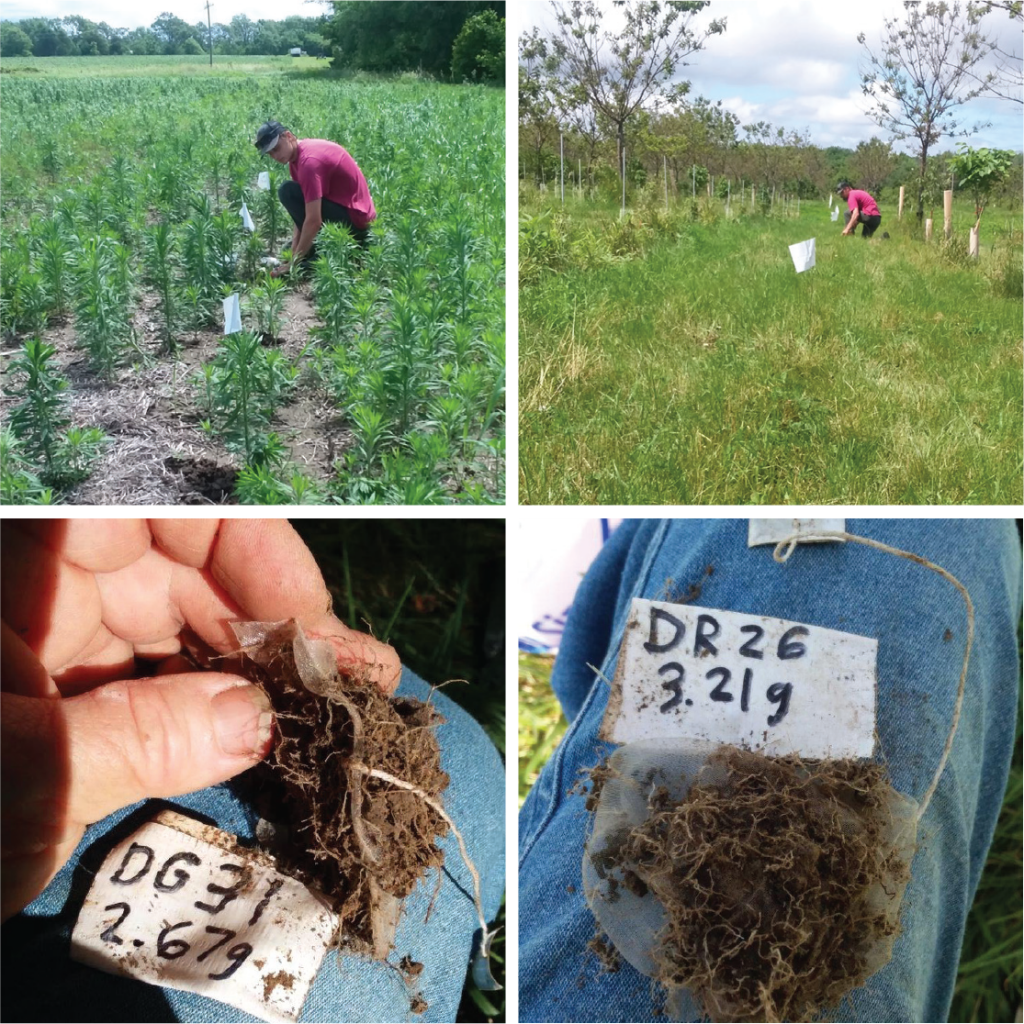 Dice is running the trial again in 2020 with several adjustments. First, she has purchased and tested a more precise scale for weighing tea bags. Second, she is only leaving the tea bags buried for 10 days. In shortening the burial period (from 50 days), she hopes to still be able to measure mass loss due to microbial activity. She also hopes shortening the burial period will preclude extensive root systems from developing through the tea bags, which proved impossible to remove entirely and likely affected the final mass of some tea bags in the agroforestry sites. 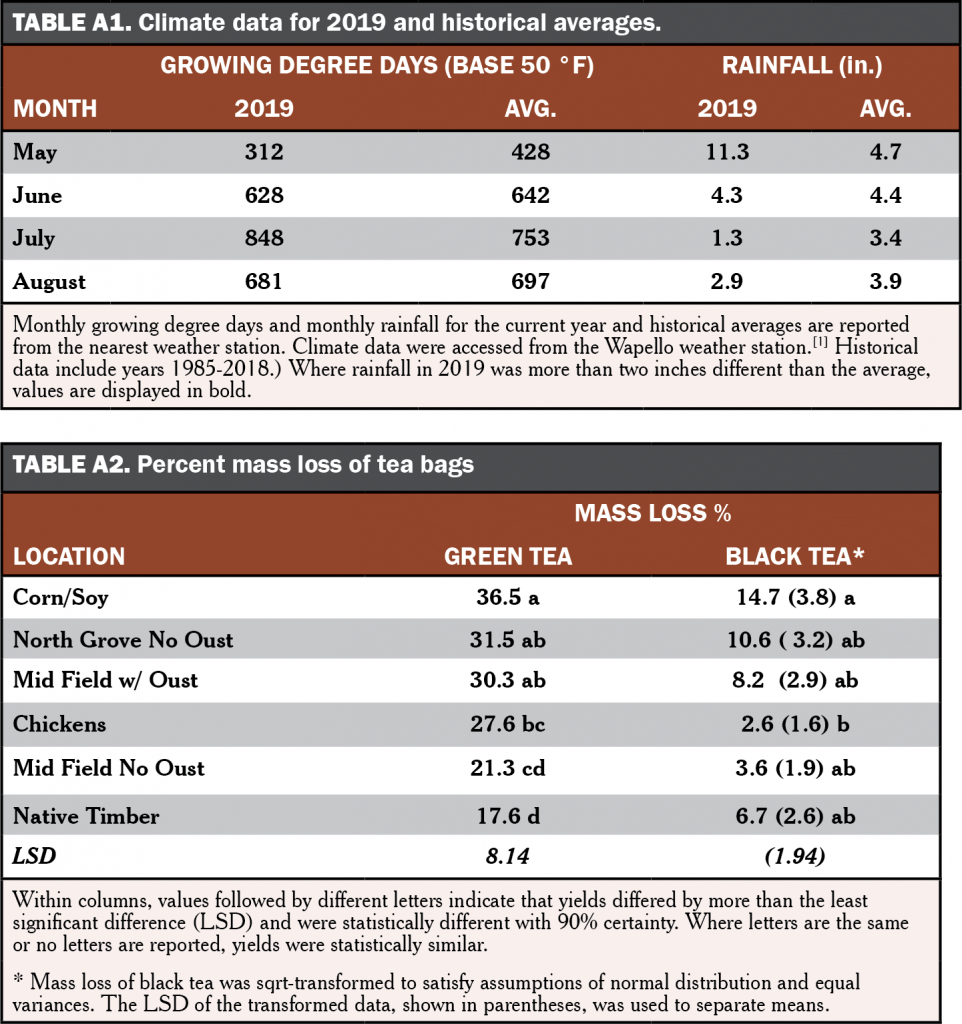