Approximately 60 people came together December 2-3 at the Des Moines Area Y-Camp to learn more about operating a CSA. Attendees ranged from farmers considering CSA as a farm model to those who had operated a CSA for 15 years. Three CSA farmers presented an amazing amount of information over the two days. It was nice to have insight from different perspectives. 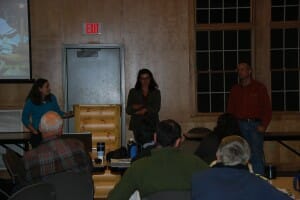 Rebecca Graff owns Fair Share Farm near Kearney, MO, with her husband Tom Ruggieri. They have 120 CSA members who are required to work on the farm. They provide CSA products for 24 weeks of the growing season. Tom and Rebecca only market their products through their CSA.

Margaret Marshall is the CSA manager at Featherstone Farm near Rushford, MN. She works with farmer Jack Hedin and Featherstone staff to coordinate over 30 drop sites and 860 shares. Featherstone Farm markets half of their products through CSA and the other half through wholesale outlets. 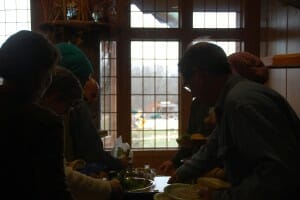 Attendees dished up delicious lunch. Tomoko and Suzi created magic in the kitchen throughout the workshop.

Too much was discussed to summarize all here, but some highlights include:

Speakers asked the audience if CSA was right for them, and if they were ready to operate a CSA. For example: Have you: produced the quantities you’ll need, of at least eight crops, each week throughout your promised harvest season?

Rebecca Graff shared her succession planting plan, which is also available online: http://fairsharefarm.com/info/pdf/fair%20share%20farm%20seeding%20planting%20sheet.xls. Not only can you plan forward for succession planting, but you can plan backwards: set your target harvest date and work back from there. 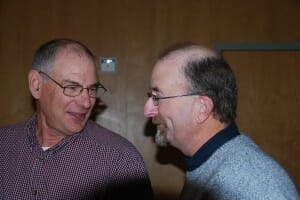 Dan Wilson (left) and Tim Landgraf chat during a break

While discussing what to grow, Chris Blanchard suggested that every vegetable farmer should own a copy of Knott’s Vegetable Handbook.

Rebecca Graff talked about how they incorporate no-till into some of their vegetables. The pile a thick layer of hay on the planting area-to-be, pull the hay off before planting, then plant. Is anyone in Iowa doing this or interested in trying it?

His example included information from his knowledge and experience. However, he brought up a good point during the day. “All CSAs presented were examples, not models.” To calcuate realistic CSA profit goals, it is important for farmers that reflect their own profit margins and income per acre.

Margaret Marshall gave a good example of how hard it is to find long term land. Featherstone farmer Jack Hedin and his wife just purchased farm land last year. Until then the farm had been on rented ground, creating less stability for the farm. It is impressive that Jack perservered and continued to grow a business during multiple land shifts. 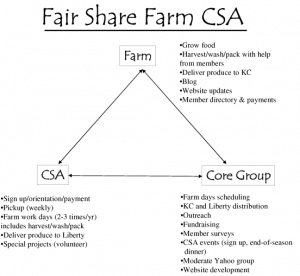