You Say Potato, I Say…

Garden season is finally here! One of the first crops to get planted in the spring is potatoes. They can be planted as soon as the ground is workable. Home gardeners often plant by Good Friday. Andy and Melissa Dunham of Grinnell Heritage Farm (GHF) receive their potato shipment after risk of their spuds freezing during delivery. “We force the eyes to sprout by laying them out in the greenhouse and watering them for a week or two, and usually plant around mid-April,” says Andy. 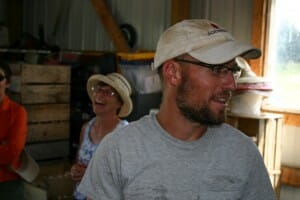 Grinnell Heritage Farm plants a mixture of potato varieties to extend their season and spread risk. Some of their favorites include:

GHF plants their potatoes two to three inches deep and eight to twelve inches apart. Andy: “Some varieties give you ‘lunkers,’ or huge potatoes if you give them enough room, so we plant those closer.” Andy hills his potatoes with his tractor: “It prevents sunburn and makes the potatoes easier to dig.” You can hill by hand by simply shoveling dirt onto the potato plants.

“Colorado potato beetle is the biggest pest of potatoes,” says Andy. “Before the widespread use of pesticides it was often the job for kids to walk along with a coffee can full of kerosene to put the beetles and larvae into. If you only have a few, picking off the larvae and drowning them is still an effective way to control them.” The crew at GHF scouts the field regularly, and sprays organically approved Bt or Entrust if the beetle population reaches a critical threshold.

Andy recommends storing potatoes dirty and avoiding temperature fluctuations. “Ideal storage conditions are 40-54 degrees and 95-98% humidity, so a semi-open bag in a cool space would work. Rotten potatoes really stink, in addition to making others rot, so keep your eyes peeled.”

Farming Practically is a monthly column I write for Wheatsfield Cooperative’s “The Field Journal.” The newsletter can be viewed in its entirety at http://local.wheatsfield.coop/newsletters/newsletter.pdf