Maury and Mary Wills and their children opened their orchard to 60 visitors August 3 for a Practical Farmers’ field day. The day was hot and dry, perfect conditions to tour an orchard that is weathering the impact of both of these conditions. 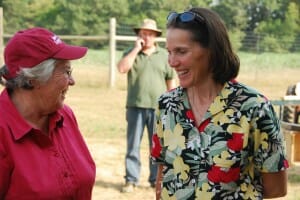 The field day started in the shady apple barn, where Maury highlighted the farm’s history. The Wills purchased 32 acres of their property in 1991, and recently purchased an additional adjacent 30 acres. They planted their first apple tree in 1992. The orchard is now home to approximately 1000 organic apple (principal species), peach, tart and sweet cherry trees.

From the beginning the Wills had a vision to create a profitable orchard. “To do this, recordkeeping is huge,” stated Maury. “Pretty soon we realized that value-added equals value-captured,” said Maury. When the family purchased the property, they built and lived in the basement portion of a home. As the family grew, so did the house. Since they first resided in the basement, a full kitchen existed down there. The Wills investigated what it would take to license the basement kitchen to allow the family to produce and sell value-added items. Maury: “To get the kitchen licensable required installing a handwashing sink, a three-basin sink, two more walls and a door to close the area off from the rest of the house. Often licensing a kitchen is simple and doesn’t require a lot of investment.” 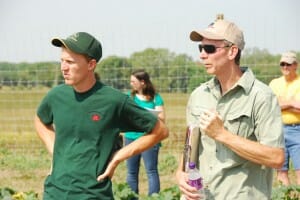 After the addition of a licensed kitchen, the Wills were able to sell apple pies, applesauce, apple butter and other value-added items in addition to apples, pumpkins and gourds. As the family added trees, the trees became more productive, and awareness of their operation increased, it became overwhelming to open their personal home for farm sales. They built a retail barn open to conduct sales and welcome visitors. “Our new retail area is bigger and more professional,” said Maury.

The Wills are in the process of completing a larger commercial kitchen, apple processing station and storage area that is connected to their retail area. Original plans included finishing the kitchen this year, but record 90% apple crop loss combined with drought have changed the cash flow and farm infrastructure budget for the year. “Right now all efforts are going to irrigation and keeping crops alive.” The processing area accommodates an apple washer custom designed for the farm. 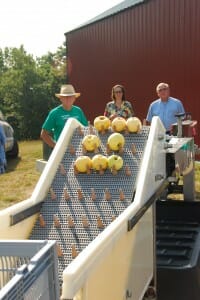 The farm tour included a walk past the Wills’ corn maze that has been desiccated by the drought. Maury: “I’m not a corn guy. All I have is a two-row planter, but we plant a maze for our fall festival.”

We also surveyed the farm’s pumpkin patch, where most of his irrigation efforts have been going this dry season. Maury does not manage his pumpkins and squash organically due to pest pressure. Some of his preferred pumpkins varieties include Mystic +, Moonshine, Knucklehead, Appalachian and Magic Wand. The family planted organic peppers and tomatoes for the first time this year to try to capture some revenue lost to the apple bud freeze.

Fruit and vegetable extension staff Joe Hannan and Patrick O’Malley presented throughout the tour on fruit and vegetable production. Joe recommended tensiometers for checking crop irrigation needs. “It is a much more accurate way than sticking your finger into the soil, and can help reduce incidents of blossom end rot in tomatoes and peppers.”

After a delicious lunch, people were able to look inside the operating commercial kitchen that is in the basement of the Wills home. Mary: “It is kind of nice to see this kitchen because it shows people that you don’t have to have a fancy or large area to be able to license it for commercial sales.” 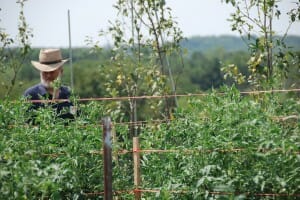 Tomatoes, a new crop for the farm

The harsh weather of 2012 will not deter Wills Family Orchard’s annual fall festival in September and October. The farm is very picturesque, and I think its loveliness and the wonderful family is reason enough to stop by. If you need more encouragement, perhaps live music, U-pick pumpkins, games, hay rides, apples, applesauce and apple pies will entice you. Find more about the festival at www.willsfamilyorchard.com.