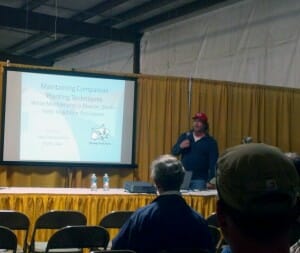 A couple weekends ago, I had the chance to attend the Small Farms Conference and Tradeshow in Columbia, MO. It was my first time going, and I was quite surprised that I had never heard of this excellent small farms-focused event before, having lived in Columbia for more than five years, and having been involved as a student with agricultural journalism as well as working for a few months as an ag communicator at University of Missouri.

I was really glad that I attended — not just because of the excellent span of topics and wonderful access to the speakers and experts (though that was a great perk!) — but also because I got to run into other PFI members who’d made the sojourn down south as well. It’s always exciting to run into another PFI member when traveling — and to see PFI t-shirts (and even  “Don’t Farm Naked” shirt was spotted at the conference!).

Among the many sessions my husband, Chris, and I attended, I was delighted to learn that Rob and Tammy Faux would be attending to present on the findings to date of their SARE research project. I sat in on Rob’s session, and was impressed with how at ease and facile he was explaining some of the complex concepts of intercropping (a.k.a. companion planting), and the data from the project, and how he did it with a great sense of humor. Though I was furiously typing away on my laptop, I did manage to snap a quick pic on my smartphone.

He made a particularly important point for any smaller-scale farmers who are hoping to someday scale up their operations: to do so effectively, it’s critical to find ways to make your farm more efficient. Rob and Tammy decided to find out if they could save some time and labor with their intercropping program by planting two crops at the same time that they had previously planted separately. Row spacing was the key focal point they explored for a SARE grant they received to test this question.

Rob has done a much better job summarizing the details of the SARE report on his blog than I did in my note-taking, so have a look! http://genfaux.blogspot.com/2012/11/sare-grant-pre-report.html

And stay tuned to the blog, as I hope to post some separate entries on other sessions I attended.