On-Farm Poultry Processing for Home Use

**note**  The extended post contains photos and descriptions of poultry processing – be mindful if you don’t like the sight of blood.

Nearly 30 people “got practical” at Kim Alexander’s hands-on poultry processing field day on June 5.  Blessed with good weather and good company, the crew learned how to humanely, quickly, and efficiently slaughter and butcher chickens for personal use or for small-scale on-farm sales.

Kim, an experienced grazier, spent years in Texas perfecting his methods of grass-finishing poultry and beef.  Finally back in his home state, he is increasing the size and scope of his farm each year, but took the time to show new chicken owners some excellent techniques.  Can’t do much better than learning from a guy who can by himself take 25 birds from pecking to packaged in an hour! 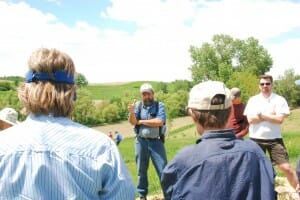 Kim’s setup is simple, yet effective.  A stand-alone garage with an overhanging roof off one side houses the process.  Under the overhang, kill cones set above a ‘trough’ to collect blood and keep it from dirtying the concrete.  The blood is diverted into tubs and then dumped around garden plots as a wildlife deterrent.  Birds are put headfirst into the kill cones and their jugular veins are cut.  Kim advises not slicing through the trachea, as allowing the bird to continue breathing reduces stress and keeps the heart beating – making for a better bleedout. 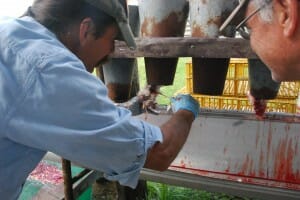 Proper slaughter technique - the jugular veins are cut, but not the trachea

Once the dead birds are past the “running with their heads cut off” stage of involuntary muscle spasms, they are scalded to loosen the feathers.  A large tank with a heating element and thermostat brings water to about 150oF – steaming, but not boiling.  A bit of dish detergent is added to break surface tension and help the water penetrate past the water-impermeable barriers of the feathers.  Four birds at a time are hung by the feet from what looks like a rake head hanging from a heavy bungee, and then all four can be dunked into the scalding water for about 45-50 seconds. 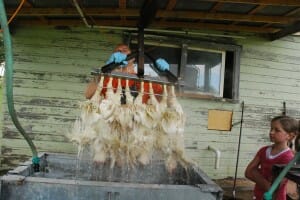 Four birds at a time are scalded

The sopping birds are pulled out of the water and placed into a plucker, a large drum with rubber fingers lining the inside.  At the push of a button, a rotating bottom piece spins and the birds are thrown against the side of the plucker, pulling the loosened feathers out.  Within half a minute, naked chickens are removed and passed to the inside of the shed through a trapdoor. 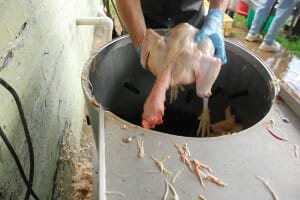 The trapdoor deposits the chickens directly onto a stainless steel table for further processing.  The group watched as Kim demonstrated some dexterous dismemberment, while he explained the process.  First the head is removed – the bird is laid on its keelbone on the table, neck hanging over the edge; the butcher then pushes down on the head to remove it and hopefully pull the trachea along with it.  While still breast-down, the oil gland at the base of the tail is cut off – or the whole tail, if there are a lot of feathers still hanging on.  Then the bird is flipped onto its back and the legs are removed at the joint where scales become skin.  A cut is made in the cavity between backbone and keel, and the evisceration begins.  Kim showed how to easily separate the internal organs from the body cavity wall by twisting the hand around.  The middle finger of the other hand is shoved down the bird’s neck, hooked, and used to separate the trachea (if present), crop, and esophagus from the front end.  This enables all the organs to be removed at once with a good strong pull.  A U-shaped cut is made around the anus, disconnecting the entire mass of organs.  If desired, the heart, gizzard, and liver are separated from the other organ.  The lungs are scraped from the back wall, where they lie close to the ribs.  All undesired organs are dumped into large tubs and will be composted later, along with the feathers; organs for consumption are kept in buckets of cold water. 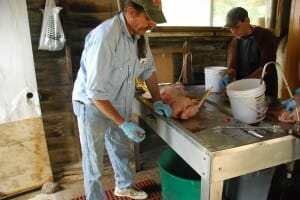 The head is pulled off first 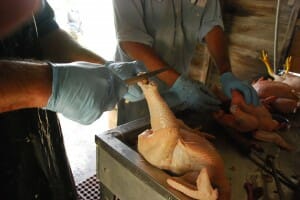 The legs are removed next 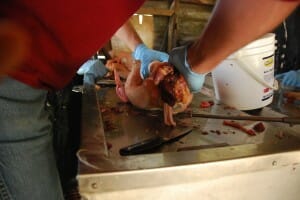 What remains looks very much like a chicken one would buy in the store, except for some blood and the fact that really it’s much healthier.  A quick rinse cleans up the skin and removes any bits of viscera in the body cavity.  Kim then cuts a small slice in the skin right below the keel, and pushes the legbones through – creating a more compact bird and a great presentation.  Finished birds are put into one of several chill tanks, filled with gallons of cold water and a few ice blocks.  There they will cool for hours, while the process of rigor mortis completes.  Unlike in red meat species, poultry quality is best when the meat is chilled quickly. 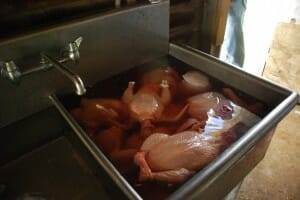 Processed chickens in one of the chill tanks

The process explained and demonstrated, the crew got to work.  Anyone who wished was given an opportunity to slaughter, scald, pluck, and butcher chickens.  Over a hundred were done within the span of a few hours – not quite the ratio of Kim and his experienced crew, but a great start for first-timers!

After a cooperative clean-up, the group met back by the house to check out the chicken tractor that Kim had raised his birds in.  A variation of the Salatin-style pens, it was partially-shaded with an enclosed open area.  Twenty-five birds had lived in the pen, moved daily around the yard; as they got larger they were allowed free access to grass but were rounded up at night for safety.

And then the moment everyone waited for…lunch!  Kim’s wife Gloria and daughter Charity, along with some friends and neighbors, brought out a feast of spaghetti and meatballs, fresh asparagus, garlic bread, and iced tea.  The meat and sauce were totally of farm origin, as was the asparagus, and the mint in the tea.  Dessert was rhubarb cake (homegrown rhubarb that is – you know you’re jealous) and whipped cream.  The family is committed to being as self-sufficient as possible, and Kim elaborated on their basic farming and marketing idea: “Grow what you like” was the first rule – so if there’s extra, you’ll want to eat it!  Then: “Eat what you can, can what you can’t, and sell what you can’t can.”  Basically, start small and to sustain yourself.  Then start giving away samples of the surplus.  People will come back for more if they like it, and will tell you if they don’t.  This has been the basis of the Alexanders’ marketing and planning for years.

The afternoon concluided with a tour of the farm proper.  Kim showed off his other lawn mowers – a handful of Dorper hair sheep from the Wilson’s herd.  Meat aside, Kim says they’re worth it just for the lawn care and entertainment factor.  Everyone agreed, watching the lambs bounce around.

Kim’s cowherd is a mix of easy-keeping Hereford and heat-resistant Tuli.  The cattle are raised solely on grass and forage, rotated around the 160-acre farm as needed.  The land had been in CRP for years, so features a lot of bromegrass as well as some vetch as a legume.  Kim also showed off his energy-free watering system, an idea gleaned from a pasture walk at Jeremy Peake’s last year.  Except during very cold weather, it requires no de-icing, and cattle can access water at any time. 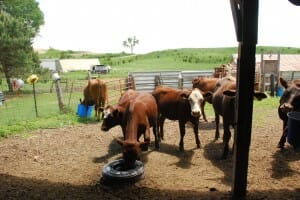 Past the cattle was the starting orchard.  Kim has planted several varieties of fruit trees over the past few years, apples, peaches, pears, and cherries of preferred varieties and hardy stock.  The trees are planted in rows along one of the farm’s highest hilltops, with pea-gravel and hay mulch to reduce weed and grass pressure.  Lanes between the rows of trees can be fenced off and grazed by the cattle, maximizing land usage.

From the top of the hill, one could appreciate why Kim regards the Loess hills of western Iowa as a hidden jewel.  His lush pastures and productive farm demonstrate what can be and what should be.  A stark contrast can be seen by looking around, though.  Bare soil covers most other hills as row crops are planted.  Right across the fenceline from Kim’s knee-high grass and slick cattle, thin cows and a lanky bull are being fed hay on a now-bare lot. 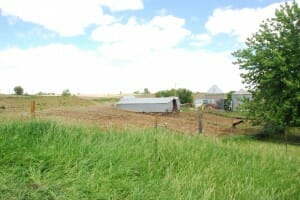 Like many other PFI farmers, Kim and his family regard themselves as stewards of the land, and consider it their responsibility to manage it in alignment with nature.  The land will work with farmers, if they work with the land. 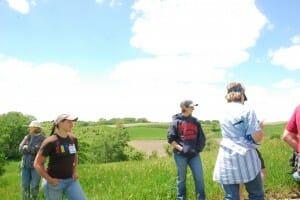 Kim has made a DVD for poultry processing titled “Treasures of the Lost Art,” which is available for purchase.  Contact him at alexanderfamilyfarm@yahoo.com