On a rare crisp and cool morning in July, a small group of PFI members, eager to get their hands dirty, gathered around a steaming pile of manure at TableTop Farm near Nevada. The goal for the day was to learn about a prototype greenhouse heating system and to build a healthy, aerobic compost pile to serve as the system’s heat source. Rich Schuler, a Practical Farmers consultant, and Bruno Follador, a Brazilian biodynamic researcher who specializes in compost, led participants through the steps – and the shoveling. 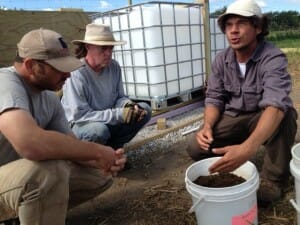 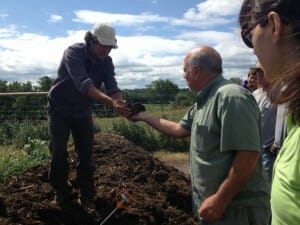 Bruno took participants through the compost process, identifying the ideal characteristics and conditions, and the common misconceptions and pitfalls. To create Bruno’s ideal compost pile,

the four elements (earth, fire, air, water) must each be included. Earth comes from the existing soil you incorporate into the pile; fire, from the nitrogen and phosphorus in green and animal manures; air, from the turning and the structural integrity of the pile; and water, from the liquids already present in the compost materials (or added during construction of the pile).

He stressed the importance of the structure of the compost, pointing out the colloidal particles of stable organic matter, called humus. Humus acts as a sponge for nutrients, holding them in a stable form and allowing plants to access them when needed. It also creates spaces for soil habitat, and can be ruined if the pile is too aggressively worked. Overworked compost feels fluffy and looks homogenous – not ideal for soil building. He encouraged participants to take the mature compost in their hands and smell – it should smell pleasant, earthy, and rich – and to notice the sugary-looking mycelium covering some surfaces. The mature compost, which cures for 3-4 months, can be liberally applied to fields and gently incorporated to the top few inches of soil. At only 2-3 months, the compost is called nourishing compost. Nourishing compost is largely broken down but is nutritionally “hotter” than mature compost, which means the nutrients are more readily accessible and not as stable. It can be applied as a supplement to heavy feeders like tomatoes and peppers.

For the structure of the pile, Bruno advised the pile be a long windrow, 12’ to 120’, with the cross-section shaped like a triangle (4’ tall) to allow the pile to cure (heat) most evenly. The pile should be quite moist when you begin; compost that is dry will become too hot (over 160 ˚F) and will scorch, leaving a blue/gray ash on the surface of the compost. At these high temperatures, valuable nutrients, bacteria, and fungi are lost. The compost pile must then must be covered with a waterproof but breathable compost fleece (a tarp or plastic can be used in a pinch). If the pile is open to rain, most of the nutrients will leach out of the compost. Worse, too much moisture can cause anaerobic conditions (lack of oxygen) that will cause the compost to rot and become putrid. Not only will this compost be smelly, it will likely harbors microbes that steal nutrients rather than assisting the plants.

Ideally, the compost will be a rough, homogenized, moist mixture of the four elements, turned gently once every three weeks (Bruno uses a Bobcat), and maintain an internal temperature of 145 ˚F. Bruno prescribes that you visit the compost pile often, ensuring conditions are favorable. Though he conceded composting his way takes more attention, it saves time and money over time due to increased soil fertility and proper waste management.

Following Bruno’s lead, participants harvested green vegetation around the farm (getting some weeding done in the process). Manure, green biomass and food scraps, and soil were spread on the ground, layered, and then mixed with a front-end loader and shaped into a windrow. This compost, or another pile like it, will be used to generate heat for the greenhouse at TableTop farm. 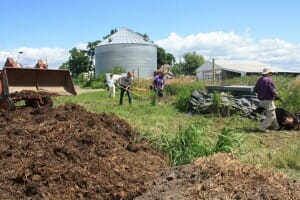 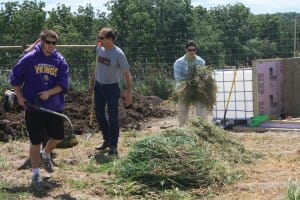 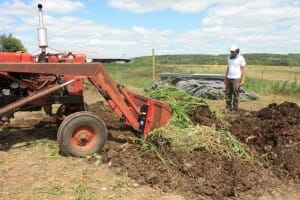 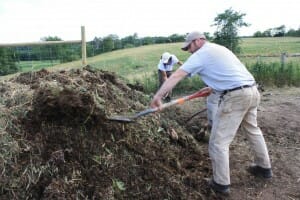 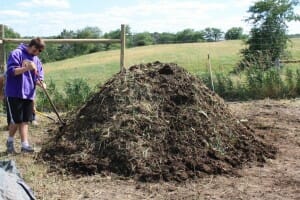 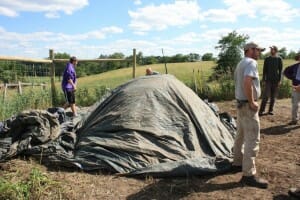 To transfer the 145˚F heat from the interior of the compost to the greenhouse, Rich Schuler designed and built a compost heat extraction, storage, and delivery system (partially constructed in the photos). The unit is made from cheap materials: 2x4s, plywood, foam insulation board, rubber hoses, and used, food-grade, 275 gallon plastic industrial totes. When operating, a compost pile will be added to the unit (approximately 1/3 the size of the compost pile in the photos). Water, running through a coiled hose nested in the curing compost, will be heated. The heated water will be stored in the totes, and when needed can be used to heat the air inside the greenhouse, which will sit about 20 feet away. This unit, which currently uses 4 totes (total of 1,100 gallons of water), is estimated to have the heating capacity of 6 gallons of LP. 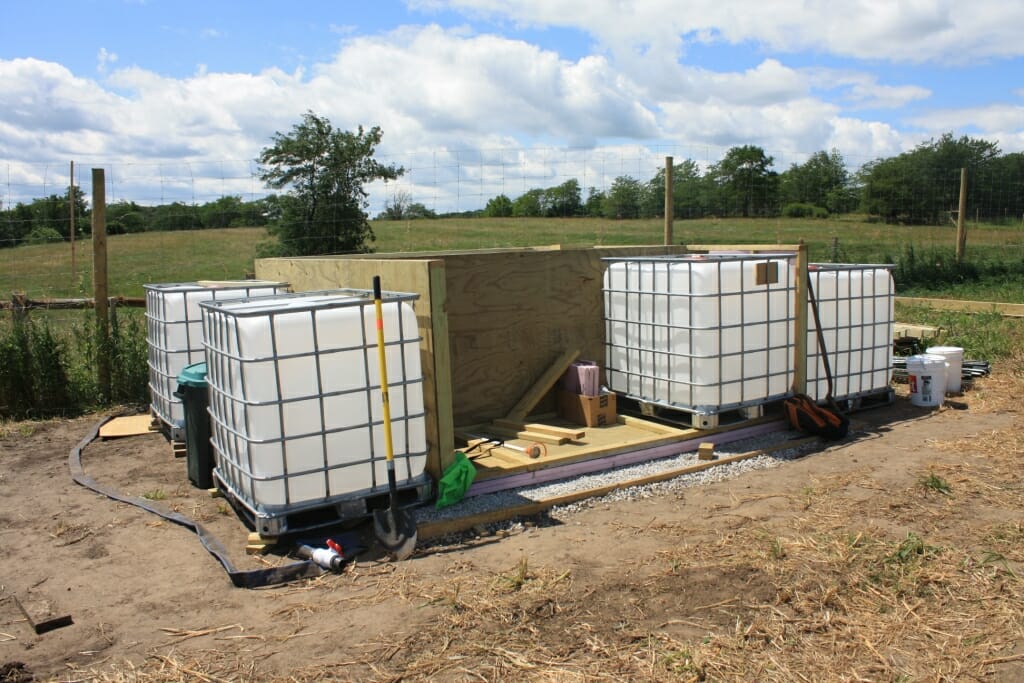 Stay posted for updates on the compost heating unit at TableTop Farm!