Francis Thicke greeted PFI staff to his field day in style: waving from the top of his wind turbine. Over 100 people gathered at Radiance Dairy near Fairfield, Iowa to learn about Thicke’s numerous energy conservation and generation projects, and to get an in-depth tour of the farm and processing facilities. Radiance Dairy grazes 80 Jerseys on 450 organic acres (about 100 in woods), processes all of their milk products on-site, and sells all of their products within 5 miles of the farm. Thicke is passionate about sustainability and renewable energy, as many Iowans know from his 2010 candidacy for Secretary of Agriculture. In addition to eliminating fuel spent on shipping by only selling his products locally, he uses pond-sunk geothermal in his house, solar panel driven water pumps for the pasture, solar electric fences, solar thermal panels for hot water in the milk and processing areas, a cupola on his house; the most recent addition is a wind turbine. 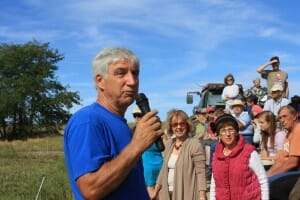 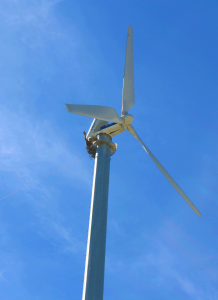 Thicke’s first piece of advice on people thinking about installing renewable energy: “if you’re deciding between wind and solar, go solar.” For Thicke, the process to secure funding for the turbine was long, the construction had many problems (including the installer defaulting in the middle of the install), and the turbine was not quite running correctly, due to some fitting and electrical problems. For solar photovoltaic, prices have steeply declined and the installation and maintenance of PV is much easier than farm-scale wind. Even still, he believes that farm-scale wind power, along with other types of renewable energy generation, should be at the forefront of energy policy. Instead of exporting Iowa’s wind power to other states, distributed generation would decrease transmission infrastructure requirements, saving money and increasing efficiency.

After the initial discussion on the new turbine, Thicke described his other energy sustainability measures on his farm. He stressed that the biggest energy savings was not any one of his renewable, but the overall structure of the farm operation and marketing. Instead of relying on cheap fossil fuels to keep cows in one place while moving feed, manure, and milk in and out, Thicke simply has to open a fence and allow the cows to manage themselves, munching away and enjoying their work.  “It’s the nature of cows to move around, it’s the nature of the grass to stand still – we’ve got it backward in this country.”

Like his pasture rotations, his farm and home energy conservation is well-planned. To water his pastures, Thicke uses solar panels to pump water from the pond to a 6,500 gallon tank at the highest point on their farm. From there the water pressure from elevation distributes water to the troughs in the paddocks. In the winter, the heat from the pond largely prevents the troughs from freezing; only occasionally does Thicke have to break a superficial ice. Another pond uphill directly pipes down to a water tank that never freezes: a continuous slight trickle overflows to a stand pipe and provides enough motion to prevent any frost formation. 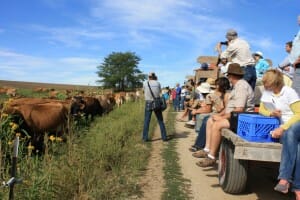 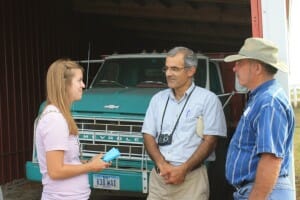 In the processing barn, Thicke uses solar thermal hot water to and recycles waste heat from the bulk tank to heat the building in the winter. He would like to devise a way to recycle the waste heat from his plate cooler using a spare water heater. For the house, Thicke’s pond geothermal system is 400% more efficient than other heating systems, and preheats water heater at the same time. The cupola, which operates throughout the whole house on one switch, efficiently vents hot air out of the house and nearly eliminates the need for air conditioning.

After Thicke presented the energy highlights of his farm, Troy Van Beek of Ideal Energy discussed the changes and opportunities for solar PV and Rich Schuler challenged students to charge their cell phones by hand-cranks, teaching them the human effort required for energy.

Participants then went on a hayride tour of the farm. Over several pasture stops, Thicke showed the group key features of his pastures and rotations and fielded questions from the audience about his management. At the first stop, cows grazed on sorghum Sudan grass. As a participant noted, sorghum Sudan grass can be toxic to animals. Thicke replied that the grass was very drought tolerant, and so was doing well in the current weather conditions. Though the grass can produce high nitrates if it gets too drought-stressed, the cows only received a little slice twice daily, mainly feeding on baleage. The most dangerous time for sorghum Sudan grass, Thicke noted, is right after a frost when the grass produces prussic acid, a toxic hydrogen cyanide, and therefore should not be grazed for several weeks after frost. 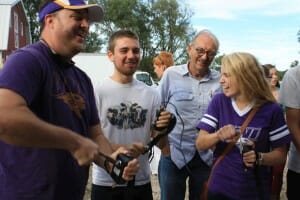 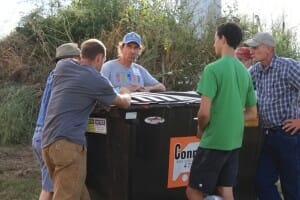 At the second stop Thicke went into more detail about the rotation of the cow groups, weaning, and lifespan of their milk cows. According to Thicke, in the industrial model, cows are pushed hard and are only milked for 2 lactations (just over 2 years) before being slaughtered. On Thicke’s farm, the oldest milking cow is 12 years-old.

After the hayride, Thicke and his wife, Susan, took participants through the milking parlor and the processing plant, which employs 2 people at ¾-time each. Radiance Dairy provides pasteurized but non-homogenized milk to all their customers (though they drink raw milk at their own table). There was also a brief discussion of protein contents for different genetics; Thicke milks Jerseys for their gentle temperament and high solids milk, and is looking into increasing the percentage of A2 protein, which is easier to digest for people with lactose sensitivity. Following the tour participants snacked on apples, beef jerky, and sliced tomatoes and peppers while conversing and enjoying the afternoon sun.