As Eric and Ann Franzenburg passed the microphone back and forth at their field day, it was clear the systems approach they employ on their farm is made possible by the diversity of knowledge, creativity, and trust between them. Pheasant Run Farm’s 590 acres outside of Van Horne, IA, is highly diversified: 85% corn and soy, 14% herbs, 1% fruits, vegetables and flowers, and they finish 1,500 hogs every year. The focus of this field day was on-farm energy and season extension, centered on greenhouse and high tunnel production of strawberries and cut flowers, soil heat in the greenhouse using a corn boiler, and the walk-in Coolbot cooler in the headhouse.

The Franzenburgs have four 20’x100’ greenhouses. Each was affordably purchased at auction; the money they saved is used for greenhouse insulation and heating the soil during cold months. Their gross sales goal is $8,000 per year in each greenhouse. Right now they are falling short in their salad greens greenhouse ($4,000 for the season) and their strawberries. 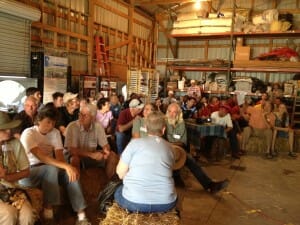 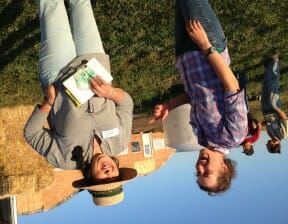 They recognize, however, the value in crop timing even if the profits are not immediately apparent. By having income from the greens in the early and late parts of the season, they are able to focus their labor and attention on different crops in the summer season. As a compliment to the farm system, marginally profitable off-season crops help them attract customers earlier, stay with customers longer in the season, and earn more income from the same space.

Similarly, as they use the greenhouses to increase the number of days for plants in the ground, they have built vertical A-frame structures for strawberry production that nearly double the production space in each greenhouse. However, several years of low yields in the strawberry greenhouse are something of a mystery for the Franzenburgs. Expecting 1lb/plant/year (or 120 pints/week), they are currently only getting 15 pints when the weather is hot. Field day participants with experience in berry production suggested the afternoon temperature spikes in the greenhouse may cause flowers to abort, which led to discussion and potential consideration of a shade cloth. 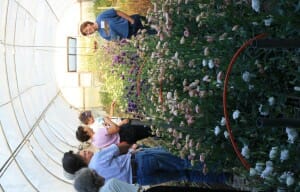 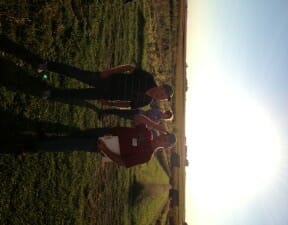 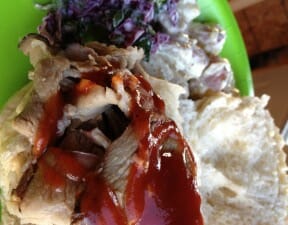 The most profitable greenhouse, and their trademark at the Iowa City Saturday Farmers’ Market, is cut flowers. Selling 2/3 of the flowers at market and another 1/3 to local florists, Ann likes to have lilies ready by the first May market through October. The market’s desire for flowers is early in the season, she says; she’s trying to find more creative ways to market cut flowers for fall. In addition to 1,000 lilies, Ann grows dianthus, lisianthus, sunflowers and karma dahlias in the greenhouse; snap dragons, gladiolas, tulips, ranunculus, anemones, bells of Ireland and some perennials in the cooler high tunnel. Ann selects her flowers based on what’s in style (via Martha Stewart Living, among other sources), florist preferences, and just what she likes. She also avoids flowers that ship easily from South America (roses, carnations), instead asking florists what they want that cannot be shipped in at good quality.

The final two, but vital components of the Franzenburg season extension system are the walk-in Coolbot cooler and the corn boiler. Rich Schuler, an engineer and energy consultant with PFI, has been monitoring the efficiency and performance of the cooler for the last year. He has temperature data loggers set-up throughout the cooler, and also records electricity usage. Schuler reported that the Franzenburg’s Coolbot cooler is, financially, an efficient way to keep vegetables cool, but isn’t without problems. Most importantly, the temperature inside the cooler fluctuates greatly throughout the day, and the cooler has never reached its intended set-point temperature – it’s consistently at least a few degrees too warm. Schuler noted that heat moving through the concrete floor (from outside the cooler to inside the cooler) is the largest heat intrusion; with “moderate heroics” of insulation the cooler could reach its set temperature and reduce temperature fluctuation. The question Franzenburgs must answer is: are they satisfied with the cooling they’re getting? If it’s enough to keep products fresh and maintain quality and safety, perhaps a slightly warmer cooler is good enough.

The corn boiler heats the greenhouse soil by running warm (~90 ºF) water through pex tubing stapled to the insulation beneath the greenhouse soil. By the time the heat moves through the 18-22 inches of soil, the surface of the soil is warmed to about 70 ºF. Because Franzenburgs raise the corn the use the boiler, they measure the cost of running the boiler as opportunity cost of not selling the corn at an estimated $6/bushel. Using that value, the cost of running the corn boiler in the fall was $782 for the fall (12% of gross sales) and $2,100 for the spring. Though the economics are borderline, the Franzenburgs like the energy independence they have by using their own farm resources for heat – it’s all part of the systems approach.

After the presentations and discussion, the 60+ field day participants toured the greenhouses and some outdoor fields and enjoyed a locally-sourced pulled pork dinner from Rehburg’s Pork and conversation into the evening.