Independence-area students are “fired up” about return of agriculture education


This post was written by PFI member Joe Olsen, from Independence, who was actively involved in the effort to bring agriculture education back to the Independence Community School District. 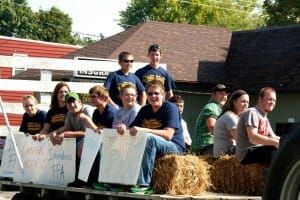 These are exciting times for students in the Independence Community School District who are interested in careers in agriculture. The journey of adding Agriculture Education to the curriculum has been challenging and dates back to 1977, more than 10 years after a long-time ag instructor retired and the program was eliminated. There have been so many changes in schools and our culture since the late ’70s, and the voices for the importance of giving kids options for careers in agriculture became largely silent. Declining enrollment translated to closing school and cutting more and more programs, while at the same time more emphasis was placed on preparing kids for college as if this was the only path to success.

As a career social worker I met with countless kids who felt disconnected from school. They had little interest in academics but loved to work and “get their hands dirty.” School was, for the most part, irrelevant. I took this perspective to seven years of service on the Indee school board during a time when we tried to pass a bond issue for a new high school. Six attempts, six failures.

On the seventh try, planners took a different tact, which included a concerted effort to talk to as many “no” voters as possible and find out what they objected to. This included farmers who basically said “yes we need a new school, but, Ag Education needs to be part of the curriculum.” There were other issues to be addressed, but on try number seven, more than 70 percent of the voters approved the construction of a new Junior / Senior High School on 92 acres on the edge of town.

Part of the “deal” was to use the profits from 50 acres of crops to self-fund a new Agriculture Education program and eventually offer FFA programming. In year one, 146 students have signed up to take at least one ag class. The naysayers who were convinced that “no kids will take ag” were silenced. In addition, the new guidance counselor suggested that there were many middle school students (mostly boys) who might not be physics majors but would grab at the opportunity to be involved in our Farm to School and school garden projects; 19 boys signed on, named themselves the Land Turners and were excited to do projects related to working the school garden. The challenge became finding enough work for them to do rather than “will they want to work?” One memorable quote from a 7th grader I had a chance to talk with was: “If it is physical labor, i want to do it; I don’t care what it it is!” He has been good to his word.

My role as a volunteer in this initiative has been most rewarding. The kids who tend to view school as a pain are fired up. The average age of the produce vendors at the local farmers market that I coordinate is well over 60 years old. I am excited that there is indeed a next generation of food growers waiting in the wings. The Ag Ed program will be a huge spark for all of our community for many years to come.

NOTE: You can learn about the return of agriculture education to the Independence Community School District after its 50-year absence at a Practical Farmers of Iowa field day on MONDAY, Oct. 7, from 1-4 p.m. Learn about the process, the unique approach to funding and hear from students enrolled in the inaugural Agriculture Education Program class of 2013-14.