The Wilson Farm: What is a fair farmland transition? 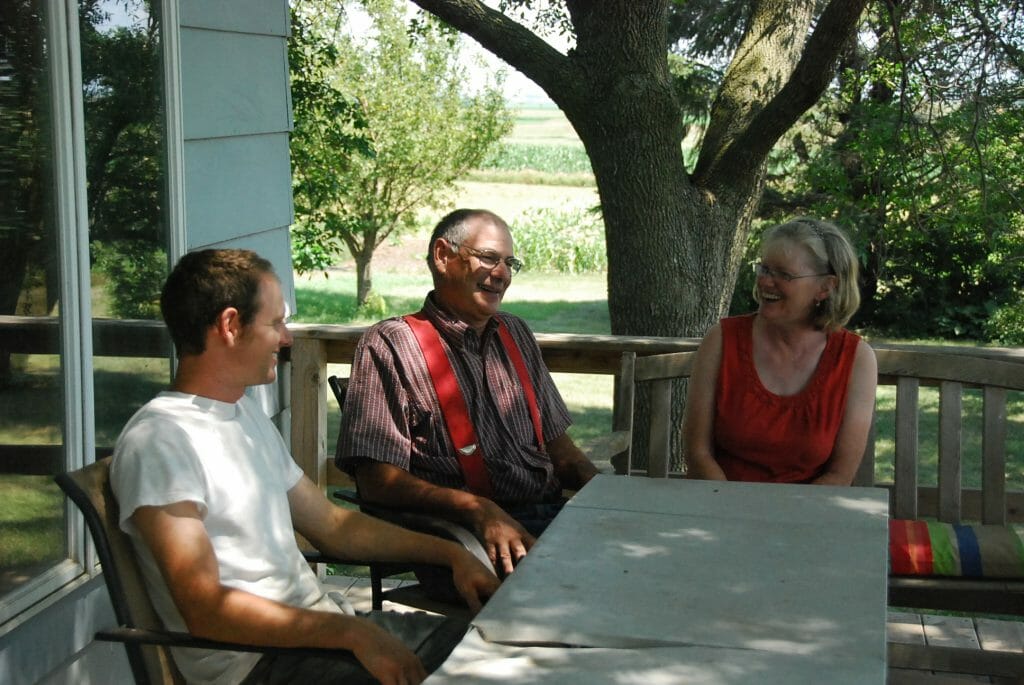 Practical Farmers is starting a major focus on farm transfer: With all of the land ownership changes coming, how will we ensure that you all have land to farm in the future?

As part of that focus, we will be showcasing PFI farmers facing those transition issues right now. PFI Board President Dan Wilson and his family have agreed to share their story. Also included here is a reaction about those facts from Landis Wiley, an agricultural financial planner with Principal Financial Group.

The facts on the Wilson Farm
Dan and Lorna Wilson farm near Paullina, Iowa. They have five children: Son Torray (and wife Erin) farm with Dan and Lorna. Son Jaron is starting to farm with them. Daughters Robin and Faye live close by but do not farm. A third daughter, April, lives in the Twin Cities. Dan’s mother is Beth, who lives close by. His father is deceased.

Dan has three siblings: Brent (works at a Des Moines area company), Holly (on East Coast, management job), and Colin, who used to farm but now is a missionary in Haiti.

Dan and Lorna own 80 acres on their own. Beth did own 640 acres that have been transferred to an LLC about a year ago. Beth decided on the LLC idea. She was afraid of the tax consequences when she died. “She didn’t want to see half the farm sold to pay taxes,” Dan says. Beth originally wanted a trust. But the Wilson lawyer advised that an LLC would be better so that there would be more planning done on how to continue the farm. He said sometimes trusts can cause riffs in family after the parents are gone. And there is indeed more conversation between the siblings because of the LLC. Beth’s motivation: Keeping the farmland together. Originally each kid would have received 160 acres. She didn’t want any of them to turn around and sell. So now we each have one-fourth interest in the LLC.

Beth lived on the farm until 2009 and was always involved in the farm management and operations. Once Dan took over from his father, he always kept her in the loop.

A benefit of going through the LLC process was that the ownership of some of the land was not what the Wilsons had thought! They thought some of the land had already been transferred to the kids and Beth had lifetime use. But a couple of parcels hadn’t actually been transferred to the children with a life estate remaining with Beth. An attorney failed to record the change.

Dan is the manager of the LLC and Dan, Brent, Holly and Colin all have a one-fourth interest in the LLC.

Says Dan: The LLC structure doesn’t recognize that Dan’s family has put its life’s work in the farm. Instead Dan gets the same interest as the others. Dan has added value to the farm. His siblings have retirement accounts. In addition, Dan spends a lot of time taking care of Beth, which is a family issue but important as well.

Very important: Dan’s dad retired when he was 62. His dad then got half of all the rental income from then on until his death. So his retirement account was Colin and Dan at first, then Dan when Colin stopped farming. But where is Dan’s retirement coming from? With the new LLC, he will get only one-fourth of the rental income. Three-fourths goes to his non-farming siblings. And his children who are farming will get even less.

There are 15 in the next generation. Lorna and Dan are taking a financial investing course to broaden their horizons on how to pay for retirement.

Dan and siblings are discussing whether the LLC could buy life insurance for the non-farming heirs.
Lorna and Dan have already taken out a co-policy for their non-farming kids.

Brent has mom’s financial power of attorney. So there are some potential differences there, as Brent is trying to get the most money for Beth. Brent wants the country average rental rate; Dan would like a discount on the rent, as that is most advantageous for his sons (who are the renters). Brent wants Dan to charge an hourly rate for managing the LLC. Dan doesn’t want that hassle.

Beth used to give Torray and Erin a discount at least in part because of the beginning farmer tax credit. But now the LLC can’t take advantage of that.

Dan has a one-year lease on the land. He did get the discount this year. Dan didn’t want to lock in longer than a year because he thinks rental rates will go down.

Dan has met regularly with Brent and there is better communication. With Beth gone, it would have been harder. Beth was here to tell us what she wanted.

Over the past year, Dan has had to deal with a lot of FSA transactions, transferring use of EQIP funds, for example, over to the LLC.

Says Dan: “The LLC really fired up Beth. She felt a huge burden lifted once it was established. Her top goal was to see the farm stay together. That was her and her husband’s life’s work.”

Now Jaron wants to build on a small parcel of farmland that cannot be cropped or grazed.It has a couple of buildings that even need to be torn down. Dan thinks the LLC should give Jaron a break on the sale of the parcel—after all he is improving it. Dan and Jaron are in negotiations with the LLC on this.

Response from Landis Wiley, an agriculture financial advisor for Principal Financial Group:
First: Who has ultimate control in the decision making with the new LLC? Verify that Mom didn’t retain control. Usually the parent retains voting shares in this kind of situation. (Dan verifies that Beth does not have voting shares in the new LLC.)

Dan, have you opened up the books so that the siblings can see? Sure, the value of farmland is high and gross income may look great. But explain all the labor hours your family puts into the farm. Your non-farming siblings may be pulling in $150,000 incomes, plus all their benefits. Do they realize how little your net income is for the amount of work involved?

Having a facilitator there when you have a family meeting is helpful. You need to lay the groundwork so that siblings can understand the farm, including decisions you make for tax reasons (like purchasing new farm equipment).

Once the siblings have that perspective they can decide on what’s fair. Equal on paper may mean that Dan and his family will not be able to farm in the future.

Finally there needs to be a conversation among the four siblings: What happens with your kids? Right now, the farm has four owners, what happens when there are 15? What if one of those 15 gets a divorce? The arrangement set up now will not hold the farm together in the future and will handcuff Dan and Lorna’s children. At some point, you will need to reconsolidate ownership if your family is going to farm.

Ideally Dan would have control of managing the LLC. You cannot build a sustainable operation having control of only 25 percent of the net income of that operation.

Dan Wilson responds:
“We realize we have just begun! We have met our Mom’s needs to keep the farm together for now and reduce estate taxes. We have a frame work in place that we can build on. There needs to more conversation and work to get to where we need to be.”

Let’s start a dialogue on these issues! Please post your comments here or send them to Teresa@practicalfarmers.org