Pesticide Drift: tasted like how a railroad tie smells…

In November 2012, horticulture farmers at the PFI Planning/Priority Setting Meeting identified pesticide spray drift as the top concern and research priority. Many people whose farms are hit with spray drift feel powerless, alienated, and unsure of the proper next steps. The farmers featured below agreed to share their spray drift experiences as part of our ongoing work on pesticide drift. All of the farmers featured in this post have reported an incident to IDALS, however, this list represents only a small sampling of PFI farmers who have been affected by spray drift, and many farms have been hit with drift more than once. These stories are offered to provide glimpse of the experience, to increase understanding and open dialogue. More stories are available in the Winter 2014 Issue of The Practical Farmer, and in the February 25 Farminar presented by Rob Faux.

Andy and Melissa Dunham operate an 80-acre farm on the edge of Grinnell where they raise organic vegetables, fruit, and hay. In July, 2009, Dunham and nine workers were exposed to spray drift while working in the field. A portion of the organic hay field tested positive for fungicide. This year they were drifted on, again. 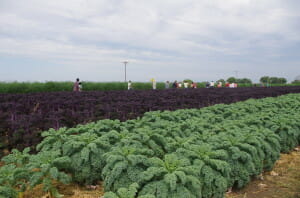 “The first time we actually saw the particles drift across the road and through the power lines. I called IDALS and they responded within three days. The applicator paid a $700 fine to the Pesticide Bureau. I didn’t want to go through lawyers, I just wanted to settle. I calculated the area, then used organic hay prices from Iowa Farmer Today to determine my losses for three years of organic recertification. We settled for something around $2,000; it took about nine months to get a check. In retrospect, I should have asked for more: a lot of extra management was needed to keep the non-organic hay separated, marked, marketed differently, to wash machinery between fields, to keep the books separate.

In years when it’s soybeans across the road, we have a good working relationship with the farmer – he does our custom bailing – he always lets us know when he’s going to spray and works with us. But when the field is in corn, it’s managed by Monsanto. Then it seems like there are some custom applicators who just don’t care.

This time when we were sprayed, it tasted like how a railroad tie smells, like creosote. I suspect the vegetable fields, asparagus patch, hay fields were all hit, though the chemical tests aren’t back from IDALS yet. If the results show pesticides again, I don’t think I’ll be as nice as before. The asparagus alone will be at least $20,000 – $30,000 in losses.”

Note: since this interview was recorded, IDALS’s chemical analysis was completed: samples from the asparagus field contained pesticide residue.  We will follow up with the Dunhams in the spring of 2014.