In the spring 2014 edition of our newsletter, The Practical Farmer, we portrayed a conversation with farmers Dick Sloan and Tim Sieren about the three-year crop rotations they use on their farms. Their three-year crop rotations consisting of corn, soybeans, cereal rye, and red clover differ from the corn-soybean rotation commonly seen in Iowa. For starters, the three-year rotation contains twice as many crop species. The diversity created by including cereal rye and red clover to their cropping systems can help to manage weeds, insects, and diseases by disrupting pest life cycles. Furthermore, both Dick and Tim grow a winter variety of cereal rye that is planted in the fall, germinates, goes dormant in the winter, greens up again the following spring, and is harvested in mid-summer. In effect, their cereal rye does double duty, acting as both a “cover crop” and a “cash grain crop.” The red clover seeded with the cereal rye early in the spring also acts as a cover crop after the rye grain and straw is harvested in July until corn is planted the following year. Thus, compared to the corn-soybean rotation, the soil is covered in two out of three winters (see figures below). 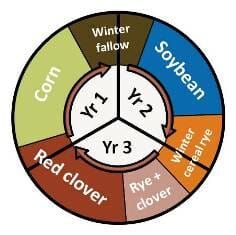 The three-year rotation, as used by Dick Sloan and Tim Sieren, with only one winter fallow period over the course of three years.

Not included in the conversation we published in the spring 2014 newsletter was Tim explaining to me the reasoning for the order crops in his rotation: “I’ve put my cereal rye for harvesting on soybean stubble for 4 reasons:

Both farmers explained in the original conversation how they manage the planting and harvesting of corn, soybeans, cereal rye, and red clover during the course of a year. They also identified when they book their seed with their seed dealers–not surprisingly, because it is planted in the fall, rye seed is booked at a different time in the year than corn and soybeans that are planted in spring.  Below is a “calendar of events” of sorts illustrating how labor on Dick’s and Tim’s farm is distributed across a year with the three-year crop rotation. 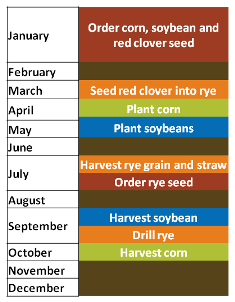 Both farmers remarked that their three-year crop rotations help to more evenly spread out labor during the year on their farms. Those acres devoted to rye and planted the previous fall between soybean harvest and corn harvest mean less acres that will need to be planted the following spring. Likewise, the rye acres harvested in the summer are not acres of land they will need to harvest or work in the fall. Tim even mentioned that getting the combine out for harvesting rye in summer is an opportunity to identify any mechanical problems prior to the busy fall harvest season.

Dick and Tim are both participants in the Practical Farmers of Iowa Cooperators’ Program. They are keeping track of costs, returns, yields, passes through the field, and anything else pertaining to their three-year crop rotations. Stay tuned later this year for a research report elaborating on more of this!