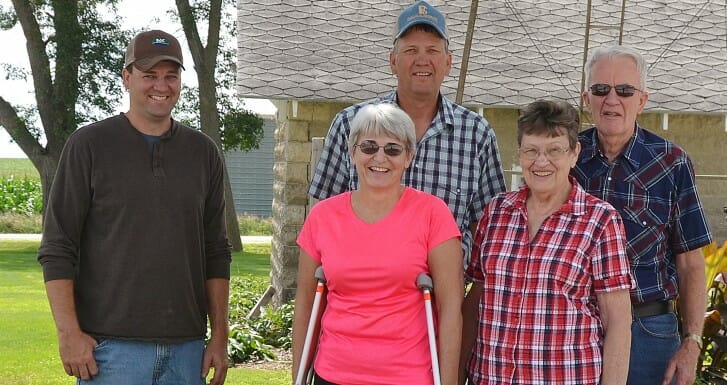 The Lynch family (Bob, Linda, Jay, Esther, and Larry) hosted a field day on July 17 near Gilmore City on their Century Farm. We covered a lot of topics that day: strip tillage; cover crops; nitrogen management; seed treatments and pollinator issues; farm transfer across generations. Nearly 50 people attended and everyone left satisfied having learned at least one new thing. 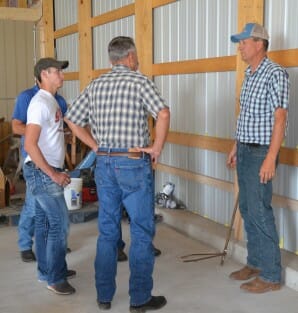 Bob Lynch shows some field day attendees one of the custom pieces of equipment he and his son, Jay, built on the farm to side dress liquid N to their corn. The v-shaped implement Bob is standing next to dribbles the N right next to the corn stalk rather than in the middle of the interrow like most side dress applicators.

The day began in the Lynch’s new machine shed with Bob (and Jay) explaining to the group their use of strip tillage, liquid nitrogen fertilizer, and cover crops in their corn-soybean production system. Bob began using strip tillage a few years ago as a way to reduce tillage on the farm–strip tillage generally leaves 80% of the soil undisturbed. The Lynch’s generally make the till strips in the fall after harvest and then plant directly into those strips the following spring. Bob also explained his preference for liquid nitrogen fertilizer (UAN [32% N]) over anhydrous ammonia for safety concerns and for the potential negative effects on soil organisms. He posed this question to the group, “Know what the military used anhydrous ammonia for back in World War II on the Pacific Islands? Making runways by injecting it into the soil to harden the soil!” Now the Lynches apply the liquid N at the time of corn planting and as a side dress application with some custom pieces of equipment that Bob and Jay constructed on the farm. 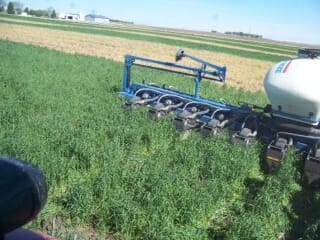 Bob shared with us a photo of him planting soybeans into a thick, knee-high cereal rye cover crop that had been terminated the previous day.

The Lynches have also widely adopted cover crops on their farm. They’ve had very good success with aerially seeding cereal rye into standing corn and standing soybeans late in the growing season. This year Bob is participating in an on-farm research project as part of Practical Farmers of Iowa’s Cooperators’ Program. The project is exploring cover crop termination date with respect to soybean planting: terminating 7-10 days prior to soybean planting and terminating at the time of soybean planting. Click here to view the trial protocols. Bob explained that rye that was terminated at the time of soybean planting was knee-high. He then directed us out to the field where the project was located and challenged us to find any remains of that “late” terminated rye cover crop. We couldn’t find any; the micro- and macroorganisms in the soil have been doing there jobs! 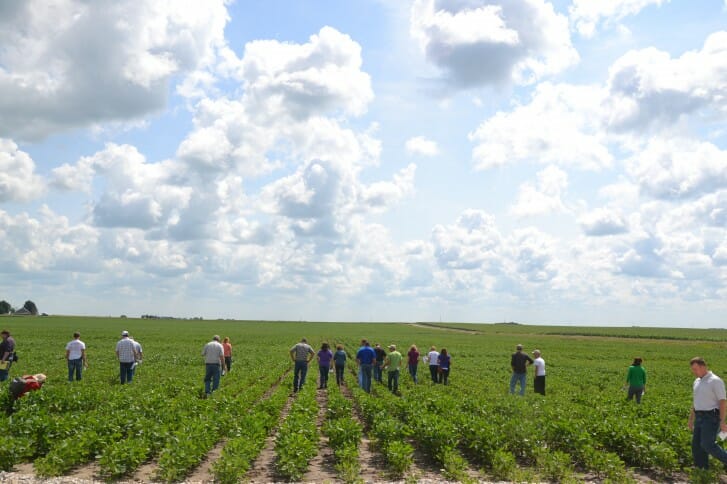 Folks take a stroll into one of the Lynch family’s soybean fields in search of any remaining cereal rye cover crop residue. The rye was knee-high the day soybeans were planted and scarcely any residue could be found. A sign of good soil health!

Bob has been impressed with what strip tillage, reduced soil disturbance, their current nitrogen program, and cover crops has done for the soil’s health. They now routinely find earthworms in their soil, a sight Bob has used to impress his neighbors! 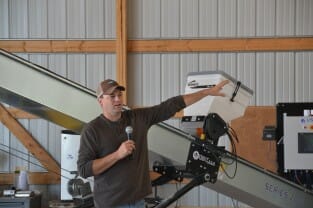 Jay Lynch outlines the facility on the farm they use to treat seed themselves.

The focus next shifted to the issue of seed treatments and pollinator issues. Jay showed everyone the facility they use on the farm to treat their own seed. This facility gives the Lynches a lot of flexibility in choosing fungicidal and insecticidal seed treatments. They’re actually participating in another on-farm research project comparing the agronomic and economic performance of soybeans grown from seed treated with neonicotinoids to soybeans grown from untreated seed. Click here for those research trial protocols. Neonicotinoid seed treatments have been the source of a bit of controversy of late with respect to efficacy and economic performance (are they worth it?) and the potential negative affects on non-target insect species (namely, pollinators like bees). Entomologists Dr. Erin Hodgson and Dr. Thelma Heidel-Baker with Iowa State University Extension were on hand to discuss these topics. 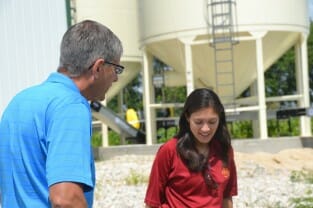 Dr. Hogson explained that neonicotinoids in soybean seed treatments are translocated through the young growing soybean plant providing protection from insect pests for about 4-6 weeks after germination. Aphids, the major insect pest affecting Iowa soybeans, do not show up until much later in the growing season. With that in mind, Dr. Hodgson presented some research suggesting that neonicotinoid seed treatments for soybeans may not be all that worth it unless a grower is expecting insect pest pressure early in the growing season. Dr. Heidel-Baker discussed some recent concerns about bee exposure to neonicotinoids by way of planter expelled dust when planting treated seed. Pollinators like bees aren’t always considered in row crop production in Iowa, but soybeans (though mostly self-pollinating) may certainly stand to benefit from a healthy and vibrant pollinator insect population.

The field day concluded with the family discussing how the farm has been transferred from generation to generation. Much of the discussion is profiled in this article that appeared in our Spring 2014 newsletter that you can read here. 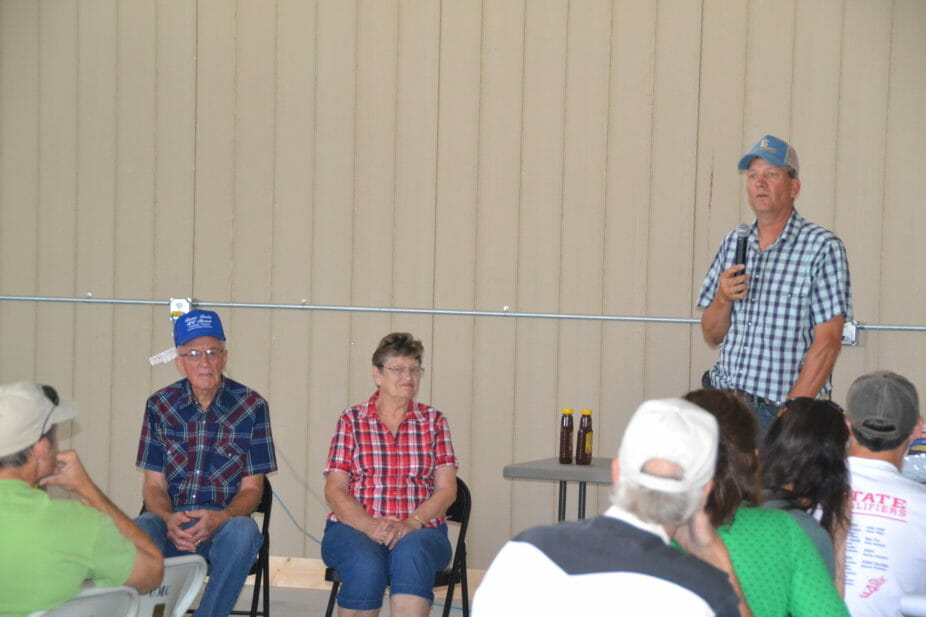 Bob, with parents Larry and Esther, talk to the group about how they’ve transferred the farm across the generations.

With all these topics addressed, we had plenty to discuss during our delicious lunch featuring pork loin sandwiches made right on the farm!