Practical Farmers of Iowa has recently released a research report evaluating 18 cover crop entries across 13 locations in 2013-2014. You can read the full report here.

This was the third iteration of a cover crop evaluation trial. You can also read the 2010-2011 and 2012-2013 reports on our web site. Nine cooperators across 13 locations in Iowa participated in this iteration of the trial. Cover crops were hand-seeded by cooperators into a standing cash crop (corn or soybeans) in two randomized, replicated blocks. Cover crops were planted into standing corn in nine fields across the locations and into standing soybeans in nine fields across the locations. Five grasses, seven legumes, three brassicas and three two-species mixtures were evaluated. Cooperators evaluated the cover crop entries for fall ground cover, spring ground cover, and spring aboveground biomass. 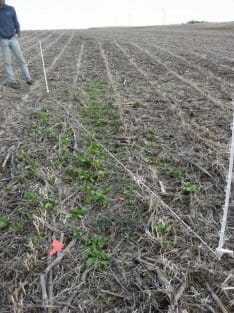 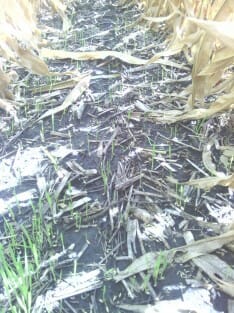 Oats germinating in a plot at Mark Peterson’s farm in Montgomery County in September 2013.

Another iteration of this trial (2014-2015) is about to get underway next month with 11 cooperators participating across 15 locations. We will be evaluating several mixes that pair cereal rye with other species that may have the potential to overwinter in Iowa. The idea is that the cereal rye may act as a “nurse” crop to these other species much like growing oats with alfalfa when establishing a pasture or hayfield.

This project was made possible by the Walton Family Foundation and the Sustainable Agriculture Research & Education program.

The full report can be accessed here. For more information on this study, contact Stefan Gailans at stefan@practicalfarmers.org.