Mark and Melanie Peterson of Bent Gate Farm hosted a field day near Stanton in SW Iowa on an unseasonably CHILLY September day. We covered a host of topics ranging from small grain production to cover crops to starter and foliar-fed fertilizer trials for corn to helicopters! We started the day in a field where Mark had grown a crop of cereal rye that he harvested for seed. Mark explained that he got interested in planting cover crops between his corn and soybeans a few years ago. Since then, the cost of cover crop seed (primarily cereal rye) began to go up as interest and adoption grew across the area. So Mark started to raise his own rye seed that he would eventually plant as a cover crop on his corn-soybean acres. Mark has been quite satisfied with replacing purchased cereal rye cover crop seed with the seed he’s been growing on his own farm for the past couple of years. You can read more about some of Mark’s thoughts on raising cereal rye in this guest post from July 22, 2014. 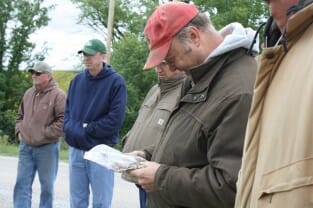 Mark has really appreciated the diversity that he has added to his farm by incorporating cereal rye production. He has not only extended his crop rotation beyond corn and soybeans; he has also expanded his options in terms of what cover crops he can successfully implement into his cropping system. The cereal rye is harvested in mid-July; there is a lot of growing season remaining! With that in mind, Mark worked with Colten Catteron of Green Cover Seeds to design a cover crop mix to plant into the rye stubble that would both scavenge remaining nutrients in the soil and fix nitrogen from the atmosphere. 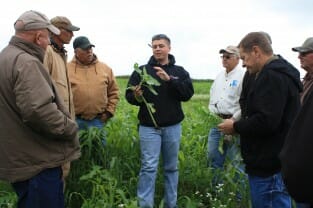 The goal is to feed next year’s corn as biologically as possible and reduce purchased inputs. The mix that Colten designed for Mark consisted of a combination of 12 species that would quickly grow after being planted in July including: sorghum-sudangrass, buckwheat, cowpeas, mung beans, forage peas, oilseed radish, and oats (and more!). Watch all of the species identified in the field in this video:

For those interested in using radish as a cover crop and getting the most benefit from its ability to root deep, a July planting after small grain harvest in Iowa is ideal. 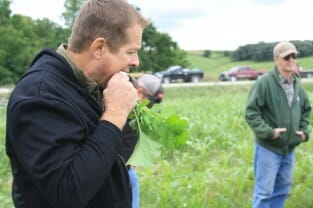 Chris Teachout takes a bite out of a radish he pulled from Mark’s field. Good for the soil and tasty!

The foliage was knee-high and lush as we walked through the field and Colten described each species’ function in holding the soil, scavenging nutrients, feeding the soil microbes with exudates from the roots, and fixing atmospheric nitrogen. Mark described this field as low-yielding in recent years and having a low corn suitability rating (CSR). Much of the reason for diversifying his crop rotation and adding all these cover crops is to biologically regenerate and improve this field. 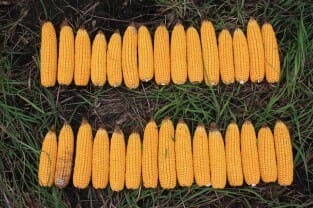 We next moved to a corn field where Mark was conducting some starter fertilizer and foliar-fed fertilizer trials with nearby United Farmers Mercantile Cooperative. Stephen Eschenbach from the coop was on hand to describe the trials and talk about the importance of micronutrients for plant growth–these micronutrients are often neglected in favor of focusing merely on nitrogen, phosphorous and potassium. In one trial, strips of corn received a starter fertilizer that consisted of NPK as well as zinc, sulfur and manganese. After collecting and observing ears from strips of each treatment, Stephen estimated that the corn that received the starter fertilizer would yield 20-30 more bu/ac than the corn that did not receive the starter. If this estimation holds at harvest time, the cost of the starter fertilizer would be overcome by the increase in yield even at today’s relatively low corn prices.

The field day program was capped with a live heli-seeding of cereal rye into standing corn by Johnson Helicopter Services. We watched as a helicopter swooped down to a grassy area on Mark’s farm as its seed hopper was filled before flying back-and-forth overhead and spreading rye seed across the corn field. The helicopter was putting the rye on the field at a rate of 56 lb seed/ac (1 bu/ac).

During supper that followed the program, one could hear all the different conversations about cover crops going on among all the small groups of folks. Fellow staffer Liz Kolbe and I learned later that shortly after we finished supper and headed back towards Ames that PFI member Steve McGrew treated those remaining in Mark and Melanie’s machine shed to a brief performance of his musical saw talents! We were sorry to have missed it.