The snow and cold have descended on Iowa and the harvest is MOSTLY finished–I couldn’t think of a better time to talk cover crops across the state! Over the last week, I’ve presented alongside farmers about cover crops and on-farm research at workshops hosted by Iowa Learning Farms at three ISU research farm locations: the Armstrong Research Farm in Lewis, IA; the Northeast Research Farm in Nashua, IA; and at the Northern Research Farm in Kanawha, IA. We had close to 30 farmers attend each of these meetings. Here are some highlights of the farmers’ presentations, ongoing cover crop research by PFI and ILF, and the discussions that ensued.

At the Armstrong Farm in SW Iowa, Kelly Tobin, who farms near New Market, spoke to the group about the research he’s been conducting on his farm as part of partnership between ILF and PFI. His research has been comparing the yields of corn and soybeans following a cereal rye cover crop to yields of corn and soybeans following no cover crop. Kelly shared a story about his first year in the trial (2009-2010) being one of the first years he’d ever used cover crops on his farm. He mentioned that his corn yields in 2010 were lower where he had a cover crop but chalked that up to inexperience–he didn’t quite know how to properly manage the cover crop in the spring. Kelly, and some of the other farmers in attendance with experience using cover crops, agreed that management is key to successfully using cover crops and not negatively impacting cash crop yields. This includes waiting 10-14 days to plant corn after terminating a cereal rye cover crop, waiting for proper environmental conditions to terminate a cover crop with an herbicide, and making modifications to planters to get good seed placement (i.e., using row cleaners). In the years since Kelly began this research, he has seen no negative impact of the cover crop on his corn and soybean yields. He even saw yield improvement of 4 bu/ac in his soybeans from the cover crop in 2013; his average corn yield in the strips this fall was 218 bu/ac. You can read more about this research here: Winter Cereal Rye Cover Crop Effect on Cash Crop Yield: Year 5.

Dennis Staudt, who farms near Marble Rock, and Tim Smith, who farms near Eagle Grove spoke at the Northeast and Northern Research farms, respectively, about a project they’re both involved in with ILF and PFI that is investigating the aerial seeding of cover crop mixes on corn and soybean yields. Late this summer when their soybeans were just starting to turn yellow, Dennis and Tim had a mix of oats, radish, and hairy vetch flown into their fields in strips. Next year, Dennis and Tim will see how corn yields are affected by this mix compared to the strips that received no cover crop this fall. Mixes are starting to gain attention in the cover crop world due to the benefits to the soil of adding plant diversity. Discussions of soil health and increasing soil microorganism abundance with plant diversity followed both of the presentations given by Dennis and Tim. This project is occurring at 8 additional farms across the state so look for project reports in the future! 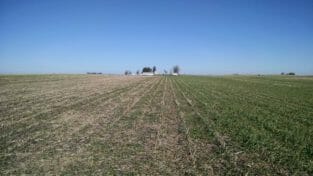 Strips of no cover and cover on November 4, 2014 on Tim Smith’s farm near Eagle Grove. The mix was aerially seeded into standing soybeans on August 29, 2014. 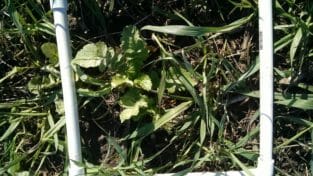 Tim Smith is also involved in another trial that is comparing cover crop seeding methods. This project is a partnership among ILF, PFI, and Hagie Manufacturing (Clarion, IA). In this trial, Tim had strips of cover crops seeded into standing soybeans in mid-September with Hagie’s new high-clearance seeder. After his soybeans were harvested, Tim had cover crops drilled into the soybean stubble. The hypothesis of this trial suggests that the earlier a cover crop can be seeded into the field, the more benefits from that cover crop the farmer will reap in terms of fall growth (soil cover) and positive impact on the succeeding crop (corn in this case). 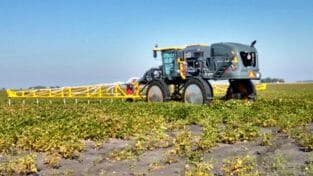 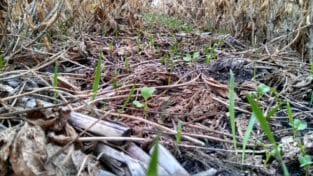 Oats and radish seedlings that had been seeded with Hagie’s high-clearance seeder on Sept. 24 on Tim Smith’s farm. The cover crops were seeded on Sept. 18 into standing soybeans. 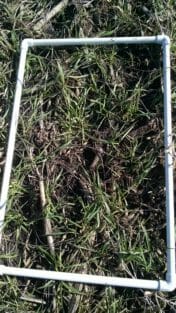 Oat cover crop on Nov. 4 that had been seeded with Hagie’s high-clearance seeder on Tim Smith’s farm. The cover crop was seeded on Sept. 18 into standing soybeans.

Oats and radish seedlings on Nov. 4 on Tim Smith’s farm. The cover crops were drilled on Oct. 11 after soybeans had been harvested.

At each of the three meetings, I got the chance to present some information and observations from our cover crop variety trials that a number of our cooperators have been conducting over the past few years. You can read about past iterations of these trials here: 2012-2013 and 2013-2014. This fall, cooperators hand-seeded a number of mixes in small plots in both standing corn and standing soybean that featured two- and three-way combinations of: cereal rye, oats, wheat, hairy vetch, common vetch, radish, rapeseed, and mustard. Through the years, farmers have observed the cool-season grasses (rye, oats, wheat) to perform quite well as cover crops in corn-soybean systems. This current research seeks to determine if cover crops from other families like legumes (vetches and clovers) or brassicas (radish, rapeseed, and mustard) have potential in corn-soybean systems. Observations from cooperators that are starting to come in this fall are indicating that rapeseed and mustard have produced good fall growth and soil cover (~50% cover) when paired with cereal rye, oats, or wheat. Radish and the legumes have not seemed to perform as well–these species need more time and heat to produce good above- and below-ground growth; a luxury we may not be able to give them in corn-soybean systems in Iowa. This is something VERY important for farmers to consider when BOTH cover crop performance (see photos below) and seed prices are factored in: radish ($2.50/lb x 4 lb/ac = $10/ac), mustard ($2.25/lb x 5 lb/ac = $11.25/ac), rapeseed ($1.00/lb x 3 lb/ac = $3/ac), hairy vetch ($1.92/ac x  10 lb/ac = $19.20/ac). Finally, the goal of the cover crop (as with any farming practice) is of utmost importance. Cereal rye will over-winter and regrow the following spring; rapeseed and hairy vetch possess the potential to over-winter and regrow the following spring; oats, radish, and mustard will not survive the winter and will only provide fall cover. 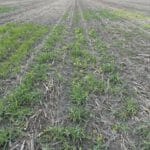 Plot view of oats+radish (25% cover) on Nov. 9 near Boone. Plot was seeded on Sept. 8 into standing soybeans. 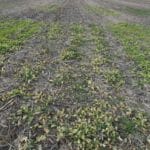 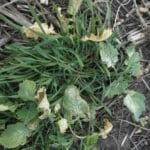 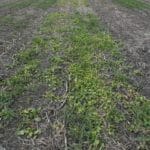 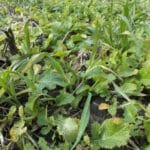 Close-up view of oats+mustard on Nov. 9 near Boone. Cover crops were seeded Sept. 8 into standing soybeans.