PFI Interview: Get to know expert cover cropper Blake Vince ahead of the annual conference 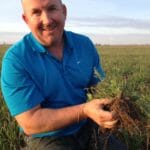 Blake Vince is a farmer from Merlin, Ontario and will be giving two presentations at our upcoming annual conference in Ames: “Get The Dirt on Soil Ecology” (with Dr. Jill Clapperton) on Friday, Jan. 23 and “Taking A Global View of Farmland Conservation and Biodiversity” on Saturday, Jan. 24. For a complete list and rundown of the sessions pertaining to field crops at the conference, be sure to read the news release here.

Blake is a fifth-generation farmer who farms in southern Ontario near Lake Erie. He raises 1,300 acres of annual crops – corn, soybeans, wheat and cover crops. He says: “As a 42-year-old farmer, my claim to fame is I’ve never used a moldboard plow, and I have 32 years of experience. I’m implementing a green cover crop system – planting into a green, living cover.” As a lead up to what he’ll be addressing in his presentations at the annual conference next month, we sat down with him and conducted the interview that follows.

Q:   You’ve said that fear of change is perhaps the biggest obstacle to cover crops. Why? What is there to fear?

Blake:   The biggest fear is fear of the unknown. Agriculture is an industry that’s ripe with tradition. It’s a learned profession, farming, whereby grandpa did it this way, dad did it this way, and now the son – it’s learned behavior.

So when you try to recommend doing something different from the norm, people worry if it will affect the outcome – yield. Today, agriculture is so driven by one determining factor – bushels, or weight of crop harvest – and we’ve lost sight of the basic idea that we have to look after the bottom line. When you talk about using cover crops, [many farmers] right away look at is a barrier, as something that will change how they manage their farm.

The good thing about agriculture is we’re independent individuals; we can think on our feet. But people don’t want to differentiate from what their peer group is doing, or feel ridicule. When you do something that’s a contrast from what everyone else is doing, there’s real scrutiny. If you’re successful at implementing change, and you’re in the driver seat to compete for land, you become a threat to your neighbors. It’s outside their comfort zone.

As farmers, our assets are out there blowing in the wind, regardless of whether it’s paid for or not. People see that as being successful, and then contemplate whether they should change.

Right now, though, people are more apt to copy than they are to think independently. Very few people lead, that’s the struggle. It’s easier if you don’t rock the boat. Unless you have the right mentality to take on the adversaries, it’s very difficult.

Q:   What’s your cover crop story? How did you come to believe in them?

Blake:   I’ve been blessed in that we had to adapt to change via no-till in the early ‘80s, when interest rates were through the roof and the co-op went bankrupt. That was our catalyst to change. We didn’t have a crop, and had to figure out how to get a crop without any money, and what could we do? We had to manage our overhead.

So today I look at [planting cover crops] as acting in advance of having to make a drastic move. My necessity for change is I see in Ontario a real reversion away from no-till back to full-surface tillage.

We’re having these annual problems with blue-green algae on Lake Erie. I know we’ve been successful with no-till. I want the water that I consume for myself and my family to be the best quality possible. And yet, farmers here don’t see the urgency to change – because they don’t realize the connection.

I’m trying to be proactive. My reason for change is I see escalating annual costs and declining annual revenue. So what I’m trying to do is be ahead of the curve and figure out a system where I can produce the same amount of crop yield to pay expenses, but by reducing costs.

Q:   So you see cover crops as helping to reduce your overall operating expenses?

Blake: We need to change our thought process away from physical yield, and more to thinking about financial yield. And the two are not equal. Most people think about highest physical yield per acre – but if it’s taking you the most money expended per bushel, I think I can be more profitable by producing less crop without those annual costs.

Cover crops save money by:

Luckily here in Ontario, wheat is still part of our rotations. We’d frost-seed winter wheat, and you can frost-seed clover into wheat. Wheat grows up and is harvested, and the clover grows. Most guys would get out and till the clover up. In my case, we’d desiccate it with herbicide, and then we evolved to doing strip-tillage.

So back to the cover crop thing, I’m a big proponent of cover crops because a few years ago, I left a single species of red clover to go to seed crop, for my own use the next year. That was 2010. In 2011, I left a 50-acre piece of clover for a full year, and where I did that I had my best corn crop – over 200-bushel corn – then 60-bushel beans, and 105-bushel wheat. By investing in myself and soil I’ve made soil better.

I had met David Brandt in Ohio and he was in a soil pit, and said can do more with soil than with iron. He invited me to his farm, where he was growing 180 bushel corn with no nitrogen fertilizer. I said, well, if he can do this, why can’t I? More importantly, why aren’t I? Who’s making the money? It’s him.

Even at 150 bushel corn, if I grew 200 bushel corn versus his 150, he’s still making more money than me. It caused me to stop and think about what I was doing at my own farm level to remain profitable. It all ties back to looking at the global perspective.

Q:   So what do you mean by having a “global perspective?”

I see that when Brazil has a big crop, Chicago goes down, and vice versa. There are other influences of course. But the question is: How do I remain competitive?

The only way I can see is that I have to make harder decisions as it pertains to annual inputs and costs. So if that means I can produce my own nitrogen via legumes, I can reduce the cost of fertilizer on an annual basis. If I can reduce amount of tillage passes, I can reduce diesel fuel, and reduce the pieces of machinery I own and depreciation.

It really made me think about my own business and how it’s run.

North Americans are very insular in our thought process. U.S. and Canadian farmers share commonality in that regard. We need to realize that we’re not trading on our own independent market any longer. What we do here is impacted by so many global demands.

When I was in Argentina [through the Nuffield Scholarship], there’s 51 unique no-till manufacturing comps. And yet in North America, the OEM had some equipment in that marketplace that will never see the light of day here in America. And yet if they don’t have that equipment available down there, they can forget about participating in the marketplace.

Then, I was on a plane from Argentina to Paraguay and met with a soybean trader from Minnesota, of Asian background. He said as the Chinese middle class becomes wealthier, they will demand more non-GMO soybeans. But the attitude here is they have to just eat what we give them. That market is greater than ours, so I thought that’s a pretty naïve way to think; we need that market. If we limit ourselves by growing a crop they don’t want, what good is that?

I try to get people to think: We’re not insular. This is a global marketplace, and the sooner we come to that realization, the better. It’s hard because it goes against tradition.

Q:   What was the Nuffield Scholarship, and what did you do?

Blake:   The Nuffield Farming Scholarships Trust is found throughout Commonwealth countries, which are those that are under the monarchy of Queen Elizabeth – so Canada, the UK, Australia, etc. The founder was Lord Nuffield, the guy who established this trust.

[Note: There are also a handful of international associations in non-Commonwealth countries].

It’s a two-year program that takes you all over the world to make a difference in agriculture. My topic was conserving farmland with cover crops, and the importance of biodiversity.

When we drive around in Iowa, corn is king. One thing that resonated with me was when we were in California, just at the outset of the big drought. They grow 50 percent of North America’s fresh fruits and vegetables. We’ve let the market go in that direction, and I look at that black soil of Iowa. It could grow anything, but it’s covered with corn. In the Bible it says is, “thou shalt not covet they neighbor’s wife.” I say, “I shall not covet my neighbor’s soil!” If we got back to day when we grew a little bit of this and a little bit of that we’d be in a better position.