Taking PFI to the World: Q&A with Lonna Nachtigal and Donna Prizgintas on Radio Award 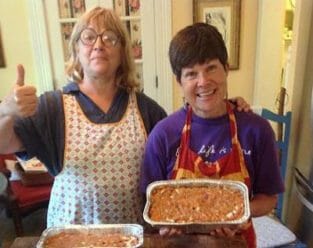 Last week, we got some pleasantly surprising news: “DonnaLonna Kitchen,” a radio program produced and hosted by long-time Practical Farmers members Donna Prizgintas and Lonna Nachtigal of Ames, had won international recognition – and a spotlight among 36 radio productions from around the world – for programming that promotes understanding of food, nutrition and agriculture.

The show, which airs on KHOI 89.1 FM in the Ames area, had participated in an international radio contest sponsored by the U.N. Food and Agriculture Organization (FAO), in cooperation with the World Association of Community Radio Broadcasters (AMARC – or, in French, the Association Mondiale des Radiodiffuseurs Communautaire), as part of the Second International Conference on Nutrition (ICN2).

Even more exciting, the show was one of just two programs from the U.S. to earn an award – and its winning entry, “Carrot King and Jello,” features an interview with PFI member Gary Guthrie, who operates Growing Harmony Farm near Nevada, in central Iowa. What a way to take Practical Farmers to new international levels!

You can access the winning entry here  (scroll down to Week 8), download the audio here or read a news release about the award here. You can listen to “DonnaLonna Kitchen” on Tuesdays at noon and 7 p.m. on KHOI 89.1, or stream it live at KHOIFM.org. Archives of past episodes are available there as well.

In the wake of this accomplishment, I chatted with Lonna and Donna to get more details and see what they thought about this special distinction.

Q: How did you learn about this international competition?

Lonna: Ursula Rudenberg, the station manager of KHOI, has a lot of radio connections; she’s been in it for years. She ran across this competition and knew about this radio organization, AMARC. There was a category that popped up this year relating to food and agriculture, and she suggested we try. She encouraged us to join and connected us with those people.

I emailed the people at AMARC in Quebec. They were ever so nice and told me how to send them a sample of our radio show.

Donna: Ursula said why don’t we do this, and when we learned about it, we thought we have all this stuff recorded and archived, so why not? Lonna has become quite the engineer – she shortened the program we sent and stitched it together – and so it was a matter of finding the material.

Q: What was your reaction to winning a place in this international competition?

Lonna: Nobody was more surprised than me and Donna! I got a letter and we got a small amount of money as an award from this radio organization. Since I was unfamiliar with AMARC and their mission, except for what I read, I didn’t know how our piece would fit into their whole view of food around the world. I’m pleased and thrilled that it does. And actually, a lady with the secretariat of AMARC, she even said, “Well, I just liked it. It was funny.”

Donna: We found out a few weeks ago. We got a notice in the mail, and a $100 check – which we presented to the radio station. I was surprised, as we were one of only two American radio shows to be recognized. I think the other was Melinda Hemmelgarn, who does “Food Sleuth” on KOPN in Columbia, Missouri. She’s involved in MOSES and on the Organic Farming research foundation board, and very involved in agriculture. She’s a nutritionist by trade and has had a radio show for a number of years, so it was quite nice to be recognized along with her.

Ursula called Karine Poirier, a French-Canadian woman who’s the project officer in AMARC’s office of the International Secretariat, and she was very sweet in her interview. She said, “Now, actually I listen to [your show] on a weekly basis because I really enjoy it.”

Note: You can hear the interview Ursula conducted with Karine here. It was featured on KHOI’s “Local Talk” program from Dec. 12, along with an interview with Donna about receiving the award.

Q: How did you decide on the Gary Guthrie episode to send?

We also realized that the contest was looking for local food and local nutrition issues. Most of their emphasis is on science and politics, and if you listen to any of the other shows, I don’t want to say it’s dry, but it tends to be very scientific.

We thought, okay, we don’t have anything to lose, but let’s show them what food in central Iowa is like. We wanted to narrow it down to a really human scale. Gary talked really well about why being good to the earth means getting good things from it, and we did a carrot tasting on-air. We have a lot of fun in the studio.

Donna: It wasn’t really clear to me who AMARC was. The only thing I knew about was the U.N. Food and Agriculture Organization, so we looked up AMARC’s site and saw it was a conference about nutrition. We thought we’d pick something we’ve done along those lines and decided to submit an entry.

Q: Will you compete again next year?

Lonna: They may have a different category next year, because they always work with the U.N. FAO, and this is the second competition they had. It depends on what their parameters are, but why not?

Donna: We do a live show every week – and just looking around Iowa here, it’s surprising what you can find to talk about. So if there’s a category that fits, sure!

Q: Tell me about the “DonnaLonna Kitchen” show and KHOI.

Lonna: The radio station has only been going for about 2.5 years. It’s a really fun conglomeration of people. We’re one step removed from public radio. We’re not professionals, but we have a lot to say about the community, and Donna and I decided we wanted to talk about local food.

Donna: KHOI is such an asset to the community; I think people in Ames and the surrounding area are only beginning to realize this. That’s one reason Lonna and I are making all these efforts to make outreach in the community, because I don’t think many people know about the radio station. It’s still kind of an anomaly, even in the state.

People are also just beginning to understand that KHOI is not a public access radio network. It’s something called community radio, which is found all over the country. The idea is we that we have complete non-sponsorship, so we’re never dictated to by monied interests. It’s staffed entirely by volunteers, and if you have an idea for a program, anyone can participate. KHOI is part of the Pacifica Network, so we carry their news programs.

We’re really lucky that the community raised the funds to get the tower and studios. We also got one of the last bandwidths available for this on the FCC – so we feel that things came together pretty fortuitously to get the radio station started.

I feel privileged to participate in it. KHOI gives us a platform to step up our voices in this community, where we can be overshadowed by academic and agricultural interests. Now that KHOI is streaming, you can listen from other parts of Iowa. We try to be pretty Iowa-centric.

Now it’s in a place where we need to raise ongoing funds, and we’re stumbling on the fact that not enough people know we’re here or what community radio is.

Q: What are your goals for “DonnaLonna Kitchen”?

Lonna: We want to pen conversation on the importance of local food and community here in central Iowa. The history of talking about food on the radio, people do that all the time. Somehow it tends to be “let’s see how fancy we can be” and fancy recipes. We felt the need for something different. There’s a lot of exciting stuff going on in kitchens, restaurants, farmers markets all over Iowa – and not just the food, but how it gets there, the community and political connections.

Donna: Lonna and I view this as women who are gathered around a kitchen table, and usually there are some community characters. I think our interviewing format is very conversational. Usually we know the people we’re interviewing – or if we don’t, it’s a toptic we agree we’re very interested in.

The nature of the show just comes from that. [Some people] who’ve never listened to the show assume it’s all recipes, like other food programs on the radio. But it’s not – we talk about politics and food, the local community and more.

We’re hitting our one-year anniversary now. We did some pre-Christmas stuff last year – that’s how we got started. It was a one-off; they asked me to come in and do some Christmas stuff and Lonna was there, so we sat down and did it together, and it was a natural fit.