Though Practical Farmers of Iowa’s Labor4Learning program has only two years under its belt, its already proved to be a useful stepping-stone for beginning and aspiring farmers on the path to running their own operation.

There are many obstacles aspiring farmers face when getting started on their own, such as the difficulty of acquiring necessary training and experience while also earning an income to support their current and future needs. One goal for PFI’s Labor4Learning program is to help beginning farmers gain on-farm training while earning an income.

This year, twelve experienced PFI member farmers are looking to hire a beginning farmer to help with their operation, and they’re willing to provide additional training in areas that are important for running a farm.  Visit the Labor4Learning webpage for more information about the 2015 job openings and how to apply.

I recently caught up with a few “graduates” of the Labor4Learning program to hear about their experiences and see where they’re at:

Ben worked with Scott Shriver in 2013 on his organic row crop operation near Jefferson, Iowa. Having experience on a conventional farm, Ben was glad to see how an organic operation works. In addition to gaining more experience with tractor work, repairs and other on-farm practices, Scott took him through their organic inspection and shared with him the paperwork involved. Going through this process was a very valuable experience for Ben, who hopes to start his own organic row crop and hog operation very soon.

About the program, Ben said, “it definitely helped me get to where I want to be. I gained the confidence that I can do this.” His advice for those interested in the program is that “people are going to get out of it what they put in.”

Ben is now enrolled in PFI’s Savings Incentive Program and is currently searching for some land to get started on his own. Unfortunately for those who would like to work with Scott Shriver, Ben is still employed with him so the Shriver Farm is not accepting a new trainee this year. 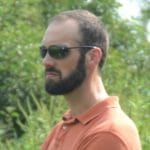 Matthew spent the 2014 growing season working with Rick and Stacy Hartmann through Labor4Learning on their Small Potatoes Farm near Minburn, Iowa. Rick and Stacy involved him in all aspects of running a CSA– from cultivating crops to customer communications.

Matthew said working with the Hartmanns was a really good learning experience and he would recommend other beginning farmers to learn from them as well. “Rick has a lot of knowledge and he’s willing to share it with you,” adding that Labor4Learning is most beneficial for those who are motivated to learn. As part of the program, beginning farmers are encouraged to participate in PFI field days throughout the year, which Matthew found to be a good way to learn from a variety of PFI farmers.

Matthew and his wife Lori are starting the first year of their CSA near Earlham, Iowa, which they hope to continue expanding and diversifying in the future. 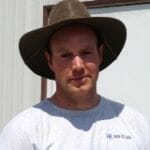 Beginning farmer Rory Van Wyk worked with Tom and Mary Cory on their livestock farm near Elkhart, Iowa. Rory described it as an overall great experience, saying that it can be beneficial for others who need real-world experience before embarking on an operation of their own. He said the Cory’s willingness to share all information about their farm—including  their financial information—was a huge benefit, and “really helped tune my goals and expectations and helped me prioritize.”

Rory and his wife have since found and purchased a 40 acre farm near Winterset, Iowa through PFI’s Find-A-Farmer website. Rory is also enrolled in the Savings Incentive program, and they are in the process of putting together their grassfed beef and poultry operation. 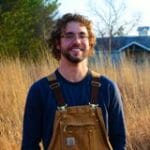 Jack worked with Jill Beebout and Sean Skeehan at Blue Gate Farm throughout 2014.  He was involved with all responsibilities relating to vegetable production but also gained some valuable knowledge on running a CSA operation.  Jack learned how to make CSA customers the number 1 priority by thinking like a CSA grower, from creating a planting schedule to managing weekly box variety.

Another important benefit of participating in Labor4Learning for Jack was the opportunity to meet other farmers in Iowa, saying, “it helped me get my foot in the door and opened up many networking opportunities.” He is now enrolled in PFI’s Savings Incentive Program where he continues to network with and learn from other farmers. (His SIP mentors Andy and Melissa Dunham at Grinnell Heritage Farm are currently seeking a Labor4Learning trainee for this coming season!)

For those who are interested in learning the ins and outs of farming, Jack recommends researching the Labor4Learning job opportunities to find something compatible with their individual goals. He found Blue Gate Farm’s size and scope to be similar to what he hopes to achieve, and he was able to learn a lot from their experiences to apply to his own operation.

Learn more about Labor4Learning and find the job that’s right for you!