The Iowa Nutrient Reduction Strategy, released in 2012, outlined several practices farmers can implement to reduce nonpoint source pollution. One such practice is the use of a nitrogen stabilizer when applying manure to crop ground in the fall. A nitrogen stabilizer works by slowing the conversion of nitrogen in the manure to nitrate by soil microbes. This in turn would reduce the potential for nitrogen losses from crop production systems that result in the pollution of rivers, lakes and streams. While the use of nitrogen stabilizers with manure might be a good crop management practice in theory, practices like this are in need of “ground-truthing” on commercial farms for agronomic and economic feasibility.

Farmer-cooperator Tim Sieren, who farms near Keota in Washington County, assessed the effect on corn yields of liquid swine manure and anhydrous ammonia applied with commercially available nitrogen stabilizers. The results are in a report entitled, “Manure additives comparison in corn production.” 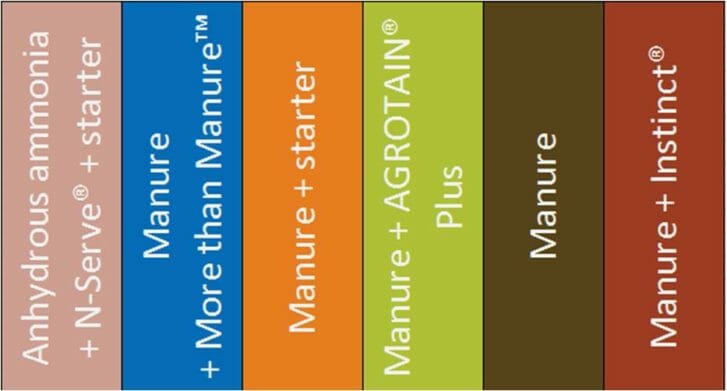 Tim Sieren compared nitrogen stabilizers in a replicated strip trial that ran the length of the field.

This project is supported in part by the Iowa Department of Agriculture and Land Stewardship, Division of Soil Conservation. For more information about this study and other studies as part of PFI’s Cooperators’ Program, contact Stefan Gailans at stefan@practical farmers.org.

The full report can be read here.