Many in the PFI membership know Rob and Tammy Faux of Genuine Faux Farm in Tripoli, IA. Though they are best known for their humorous wits and inquisitive farming practices, they have emerged as reluctant leaders standing up to pesticide drift. We have featured Rob and Tammy’s story before, most fully in a PFI farminar detailing how to respond to a pesticide drift event on your farm (apologies for the technical difficulties – the content is worth it).

Below is a guest re-blog from Rob Faux. He posted “It’s Over, It’s Just the Beginning” on Genuinely Faux, the Faux Farm Blog, February 19, 2015, just after they finalized their settlement for a 2012 pesticide misapplication that sprayed their farm, home, livestock, and Rob’s person with Lorsban, Stratego, 4E, and Sniper.

Rob posted blogs during the weeks, months, and years following the misapplication. If you want to see how a farm, and farmer, is impacted by pesticide drift, I would encourage you to read further. 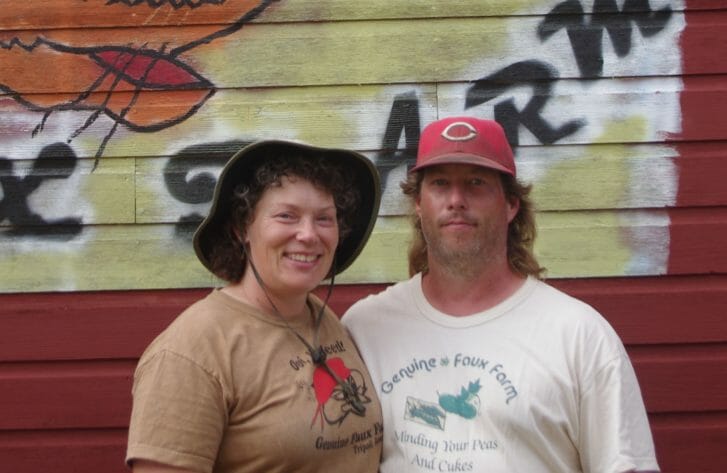 For more on Practical Farmers’ work on Pesticide Drift, search the PFI website or jump over to the PFI Horticulture page.

As many of you may already know, we have been in the process of litigation involving a chemical misapplication that occurred on our farm in July of 2012.  If you are not aware of this, then you can catch up quickly by viewing the posts on our blog that are tagged with the overspray topic.  (Hint, you may want to read from the bottom to the top if chronology matters to you.)

We have been somewhat silent over the past several months on the topic as we have been hoping for a conclusion to the process.  Of course, we still did our best to answer questions and keep people up to date.  But, our legal representative was correct, the less we said meant there was less chance we would say something that could be misconstrued and delay closure.

It is Over
But, now that I’ve beat around the bush with all of the intro stuff, we can tell you that as of February 18, 2015, we have signed an agreement on a settlement with respect to this case.  It is over.

How does it feel, now that it is over?
We anticipate that this is the first question many people will ask us, so we’ll answer it as best we can right now.  We are both relieved.  I, in particular, am not entirely sure how I am supposed to feel about it.  This lawsuit has been in the back of my mind daily ever since we acquired legal representation.  And, prior to that, we were consumed with the process of figuring out what to do after we had been hit with the pesticides and fungicides.  I think I am supposed to feel something more than just a little relief.  But, then again, it may take a while to fully realize that I don’t have to produce more documents for the discovery process and I don’t have to wonder when it will end.

Once it is broken, it’s broken.
Are we supposed to feel happy or pleased?  No, I’m not sure that we are.  I am reminded of the proverb about the broken piece of china.  If you drop someone’s valuable china and it breaks, you can apologize, you can pay for it, you can do things to atone… but the china is still broken.  In other words, the end of the litigation didn’t undo the spraying and its effects.  It doesn’t remove the hours, days, weeks, months of extra work, irritation, worry and stress that followed.  It doesn’t bring back the lost crops or fix the problems that ensued afterwards.

But, the settlement marks the moment in time that we can close one book and open another.  And that will have to be enough.

No joy in Mudville?
I think I speak for both of us when I say that we did not enjoy seeking compensation and we really took no pleasure in the process of trying to make someone pay for a perceived wrong.  We are not vindictive people by nature.  It wasn’t fun.  And, I haven’t got even an inkling of a feeling that I want to gloat or celebrate because we have reached a settlement.  It was just simply that this was something that needed to be done.  Chemical misapplication is a serious issue that hasn’t been given appropriate consideration.  Failure on our part to follow through would only perpetuate that problem.  So, we felt we had no choice but to go through this process.

But, maybe there are things to be joyful about?
There are so many other things that we should be happy about.  We are glad that this is done.  We were pleased with our legal representative, Tom Verhulst.  We are grateful for all of the support we received from others (thank you all!).  And, we take a certain amount of pride in our ability as a farm to weather the difficulty and continue to make adjustments and be successful.  We’ve had good people working for us, good people in our CSA and buying our products and we’ve had good people supporting us in many other ways.  And, as of the end of July, the section of our farm that is in transition (3 years) due to the spray will again be certified organic.

An ill wind.
It’s an ill wind that blows nobody any good.  Well, maybe there is some good to be had here and it takes the form of our ability to now focus on trying to work on the overall problem that we face with chemical misapplication in agriculture/horticulture.

Learning is always good.
Another positive that we can get from this is that we did a great deal of learning during this process.  Here are a few things we’ve learned.

1. Heartfelt concern is healing
A heartfelt apology and expressions of concern can go a long ways toward atonement and healing.  We hope we take this lesson and apply it any time it is appropriate.  We are realizing that this whole thing could have played out so much differently if any of the parties involved could have shown some real concern for our well-being.  But, we suspect that the fear of litigation causes people to clam up.  After all, concern can become an indication of guilt, I guess.

2. Our pollinators need us to pay some attention to them
We were reminded how important native pollinator populations are.  The picture of wildflowers was taken just prior to the spraying event.  Pollinators were gathering.  They were killed by the spraying and that left us with a number of infertile seed.  This patch declined significantly the following years.  We’ll have to replant, that’s all there is to it.

So many people who experience chemical misapplication situations give up on the process of reporting and pursuing change.  We understand how that happens.  You’re busy and it isn’t fun to do this.  You don’t want to confront your neighbors or local cooperatives about the problem.  It takes effort to figure out how and to whom you report.  And, then, there is the follow through to get compensation for losses.  It’s often easier to chalk it up as another of life’s lessons and try to move on.  After all, you can always grump about it to sympathetic ears, but that doesn’t leave room for forgiveness and growth.

But, this is the problem:  If there is no accountability, there will be no change.  People who are impacted by chemical misapplication need to stand up.  They do not need to do this for themselves.  Instead, they need to do this so the situation for everyone changes.

It’s Just Beginning
We don’t want this to happen again.  Not to us.  Not to anyone.

It’s time to start making some noise.  And, we’d like you to join us in doing so.