Hot off the press is a research report update to a long-term project being conducted by Iowa Learning Farms and Practical Farmers of Iowa. The project is being conducted on farms across Iowa and is comparing corn and soybeans following a cover crop and no cover crop. You can read the update here: “Winter Cereal Rye Cover Crop Effect on Cash Crop Yield: Year 6.”

Between 2009 and 2014, 12 cooperators have contributed to 46 site-years of on-farm research as part of this project. This long-term study employs a “paired strips” design with alternating strips in a field either receiving a cover crop in the fall or not receiving a cover crop. Each farm involved is in a corn-soybean rotation. The same strips of corn or soybeans at each farm receive the cover crop or no cover crop each year since the onset of the study. 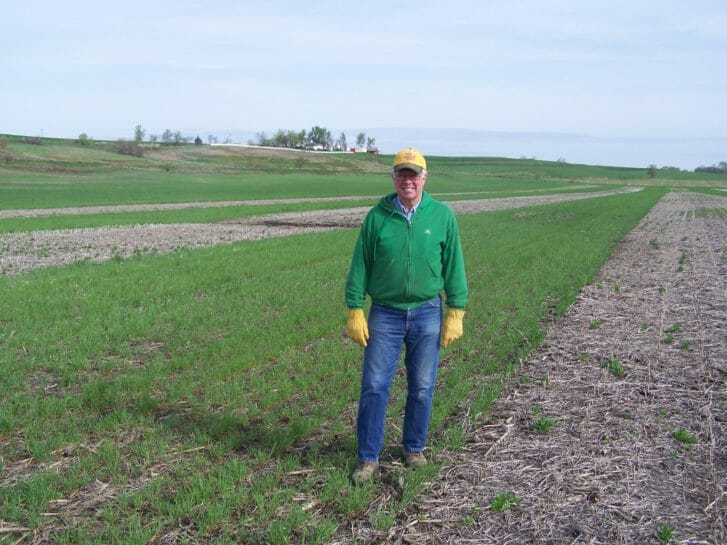 Kelly Tobin, of New Market in Taylor County, standing in some of his experimental strips.

The story of how a cereal rye cover crop affects corn yields can be divided into two parts: the beginning years and the later years. Farmers from three of the 10 site-years from the beginning years (2009–2010) reported corn yield reductions due to the cover crop. The primary culprits, according to the farmers at these sites, appeared to be insufficient termination of the cover crop prior to planting the corn and incorrect planter settings when planting the corn into the cover crop residue. In the later years (2011–2014), farmers from 18 site-years reported no difference in corn yields from the strips with the cover crop compared to those without. In 2014, five of the six farms reporting saw yields above 200 bu/ac (with or without the cover crop). In the soybean phase of the farm rotations the farmers observed no difference in yield between the strips that had a cover crop and those that did not in 13 of the 18 site-years (2009–2013). In fact, in four of those site-years, the farms reported an increase in soybean yield by an average of 6.2 bu/ac due to the cover crop.

It’s becoming clear that, when properly managed, cover crops will not harm corn or soybean yields.

The project was made possible by funds provided by the State Soil Conservation Committee and the Iowa Department of Agriculture and Land Stewardship. The 5-year research report, released last year, can be found here.