After a lively conversation on the Cover Crops E-Mail Discussion List about rye termination, we invited researcher Dana Jokela to write a blog about using a roller-crimper to terminate cereal rye. Dana is a graduate student in Sustainable Agriculture at Iowa State University in Ames. His research focuses on reduced tillage systems for organic vegetable production. Specifically, he is looking at cover crop-based no-till and strip-till systems as alternatives to conventional tillage in broccoli and bell pepper production.

Cereal rye is a great winter cover crop to incorporate into annual crop rotations. It can be seeded later in the season than most cover crops—as late as early November—and is winter hardy. Growers have several options for terminating cereal rye before planting a cash crop the following spring. Typically, cereal rye is either tilled in or killed with an herbicide application, but many growers are gaining interest in using a roller to terminate the rye without herbicide.

Success with this “organic no-till” system is dependent upon a few important factors. First and foremost is the growth stage of cereal rye at the time of termination: it must have reached anthesis, or pollen shed, in order to be effectively killed using a roller-crimper. Using the Zadoks cereal development scale, it should be at growth stage 61 or higher.

Growth stages of cereal grains. Anthesis, the stage at which a roller-crimper can kill cereal rye, is represented by stages 61-69. Image source: http://www.cerealcentral.ca/crop-management_cereal-staging.aspx?lang=en 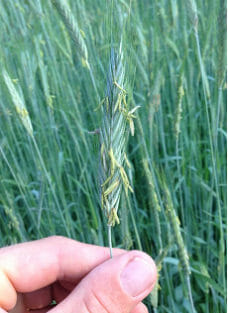 At this point, there will be yellow pollen tubes visible all over the seed heads. Since rye seed heads do not all emerge at the same time, neither will they reach anthesis at the same time. It is advisable to wait until early emerging seed heads are in full anthesis and late emerging seed heads have at least a few pollen tubes visible, which usually occurs in late May or early June in Iowa. If it is rolled prior to anthesis, it simply will not be killed and will spring back up and continue to grow.

Another management consideration is cover crop seeding date and rate, which affects total biomass production. If the farmer is depending on the rolled cover crop for season-long weed suppression (i.e. not using herbicides), this becomes even more critical. For optimal biomass, cereal rye should be seeded in September at a rate of at least 100 lbs/acre. If it is seeded much later or at a lower rate, the rolled mulch may not be thick enough to adequately suppress weeds throughout the growing season. Use of herbicide provides a backup plan to control weeds if they emerge through the cover crop mulch, making the level of rye biomass less important. 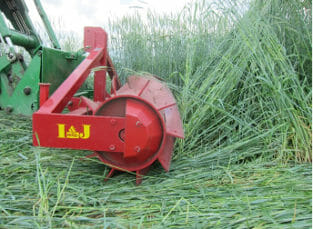 Lastly, I’d like to comment on tools for “rolling” the rye. The roller-crimper has advantages over alternatives such as a flail mower and cultipacker. The blades on the roller-crimper crimp the stems, rather than cutting them as a flail mower would. This slows the breakdown of the residue (thus prolonging weed suppression) and leaves the stems laid all in the same direction, reducing potential interference of the mulch with the planter. Some growers are interested in using cultipackers or other rollers that they may already own, but these rollers are generally not recommended. During early rolled cover crop trials at the Rodale Institute in the 1990s, many of these rollers were tested, but few provided a good kill of the rye. As a result, staff at Rodale designed and built the roller-crimper, which is now available commercially from I & J Manufacturing.

Rolled cereal rye cover crops are an exciting new tool for improving soil health in annual cropping systems, potentially preventing or reducing the need to use herbicide. However, it is crucial that the cover crop is managed properly. By waiting until anthesis before rolling with a roller-crimper, growers have the best chance at success.

RTVP Week 1: Reduced-Tillage Research at the University of Wisconsin with Rue Genger and Claire Strader