George and Steve Schaefer hosted a field day at their farm near Kalona on June 17. George talked about how they use rye cover crops; their organic and conventional grain operations; and their rotational cattle grazing operation. The first stop of the day was a river bottom field in the English River floodplain, where the Schaefers have paired strips of cover and no-cover as part of a state-wide, long-term cover crop research trial in partnership with Iowa Learning Farms and Practical Farmers of Iowa. 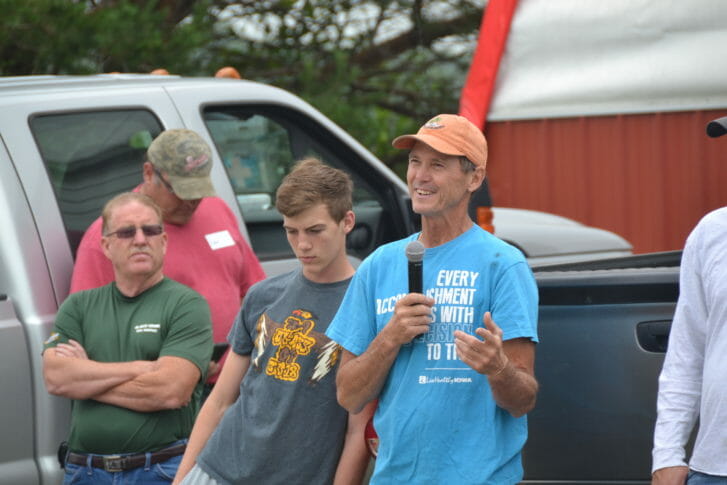 George Schaefer welcoming attendees to the farm he and his brother, Steve, run.

George got everything out on the table first, talking about some of the potential problems that need to be addressed when growing cover crops. “You have to be aware of these things, because they’re going to happen,” he says. He says that he had a bad infestation of army worms in a previous year. He observed heavy damage of armyworms in the strips with a cereal rye cover crop, and none in the no-rye strips.

Steve Berger of Wellman, who also spoke at the field day, shared his strategy with army worms. He noted that many farmers around the state this year have had problems with army worms in corn following rye. He says that army worms are attracted to green plants and begin feeding on rye in the late spring. When rye is terminated, they switch to corn and can cause rapid destruction of corn plants. He says that the pests are cheap to control—he pairs an insecticide with his post emergence herbicide application and has never had a problem with army worms. For more information about scouting for armyworms check out Sarah Carlson’s article in Wallaces Farmer and this guest post by researchers at ISU on our blog. 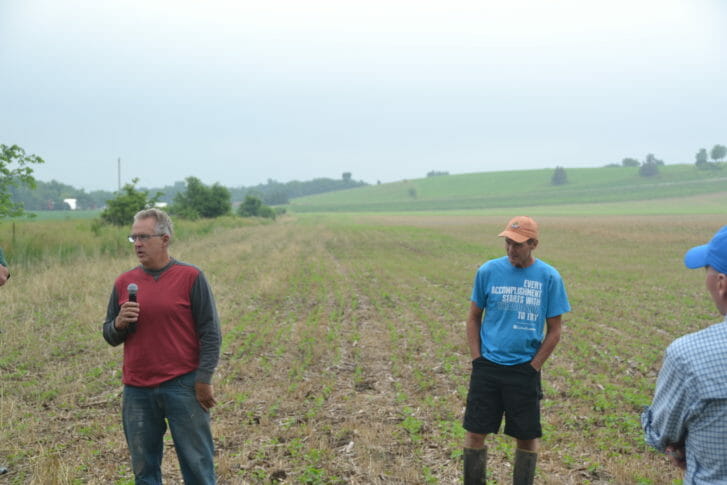 In addition to better understanding how to manage the potential negative effects of cover crops, George says that having side-by-side comparisons has allowed him to see the many positives as well. As a result of these test strips, George says that he’s found that, when properly managed, a rye cover crop doesn’t affect yield of following corn crops, and has actually improved soybean yields: “Beans like competition,” he says. In the cover crop strips, we could still see rye residue; the soybeans coming through the residue were healthy and vigorous. Read more about this long-term on-farm research project in the Year 5 and Year 6 reports. 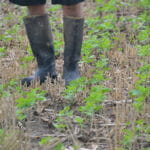 George standing in cereal rye cover crop residue that helps to hold and protect the soil while the soybeans have just emerged.

During a flood of the English River, he saw a good comparison of the erosion control of even a small rye cover crop. “The strips without cover were wiped as clean as a table top,” he says, “but even that little bit of rye, maybe 4 inches or so, held on to the corn residue and kept the soil in place.”

Steve Berger led a discussion of the role of nitrogen in cover crops. He says that nitrogen plays a huge role in making cover crops work for you. “I hear a lot about allelopathy, and that’s definitely a thing, but when people talk about rye and allelopathy, what’s probably actually going on is that there’s not enough nitrogen available.” He says that often, we’re not directly feeding the crops nitrogen when we add fertilizer, but instead we’re feeding microbes.

“These microbes are the ones that break down carbon sources into organic matter, and they need nitrogen to do that.” Microbes release that nitrogen in a plant available form as they slowly break it down. Applying small amounts of nitrogen at different times is essential to keeping that microbial population large and healthy, and able to break down more carbon.  He says he’s not putting on more nitrogen, he’s just putting it on at different times of the year.  “We’re putting on a lot of different sources at a lot of different times, and it’s done well for us.”

“Go home and read about the carbon to nitrogen ratio,” he says. Steve says that an understanding of this process is essential for being able to manage the soil’s ability to feed the crop.

We next took a hayrack ride over to George’s field of organic oats. The Schaefers’ organic rotation consists of oats-hay-hay-corn-soybeans. The oats are harvested for grain but also serve as a nurse crop for the alfalfa hay crop that is seeded at the same time as the oats.  “Organic production looks fantastic in December when we’re looking at the profits and losses,” George laughs. He says that there’s much more management with an organic system vs. conventional, but he likes the challenge. “There’s a new learning curve every season, even every day with organic. Which we like.” 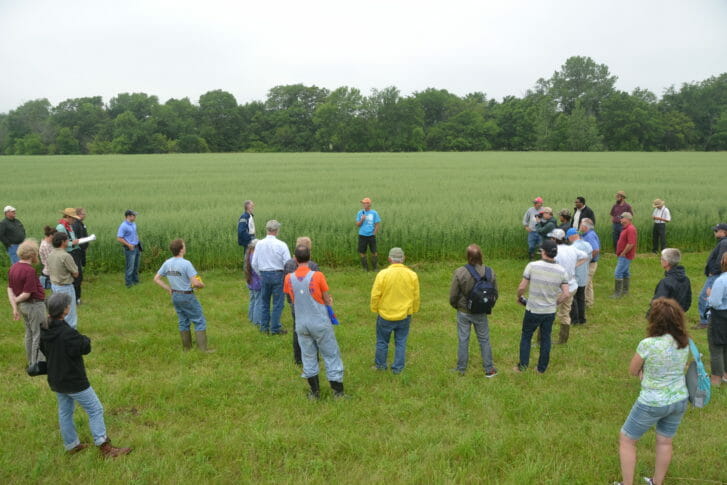 George describes to the group why he and his brother like to include oats in their organic crop rotation.

George has paid particular attention to the long-term research ISU agronomy professor Matt Liebman has conducted on diverse crop rotations. He noted how adding a third crop, such as oats, can make the whole rotation more profitable due to an increase in corn and soybean yield  as well as reductions in input costs such as herbicides, insecticides, fertilizers, and seed costs. With renewed interest in growing small grains, particularly for the goal of growing one’s own cover crop seed, George remarked that adding wheat, cereal rye or triticale would offer the same kinds of rotational benefits he sees with oats. One benefit George was very eager to point out was the distribution of labor across the growing season when one includes a small grain crop. Oats are planted in late March/early April and harvested in mid-July (typically “idle” times during the year for corn and soybean production).

George also explained their rotational grazing system and offered a bit of advice for farmers wanting to start a similar system. “Don’t put up any permanent fencing until you’ve tried your system out.” He says that he’s learned a lot since first setting up this system 15 years ago. Wendell Jones, NRCS District Conservationist based in Johnson County, was on hand to discuss financial assistance available to farmers for setting up rotational grazing systems. Financial assistance is available on a county-by-county basis and a certain level of commitment to keeping pastures in place beyond the short-term is required.

Finally, George closed with some take-home messages (below) and remarks about Practical Farmers of Iowa. “They’re an eclectic and interesting group. They’ve got organic and conventional crop farmers, vegetable growers, graziers, and everything in between.” And to those in attendance who weren’t members, “I’d suggest you join or at least go to the annual conference in January in Ames. You won’t regret it!”