Dave Schmidt, who runs Troublesome Creek Cattle Co. with his wife Meg near Exira in Audubon County, shared with me over email a small project they were trying on their farm involving rolling a cereal rye cover crop ahead of a summer grazing mix. I asked Dave to write a guest piece for our blog about their experience. Here he shares how he rolled the cereal rye earlier this month and then seeded a mix of warm season annuals for the purpose of cattle grazing into the resulting straw mulch. Check back again later for another installment in which Dave will share how the warm season annuals performed.

In the spring of 2014 I was reading Managing Cover Crops Profitably from SARE and stopped to show my wife Meg something. She immediately asked about the picture of the roller/crimper on the front cover. I had noticed it before but hadn’t thought too much about it. We started to read up on the idea of no-till organic agriculture (Organic No-Till Agriculture by Jeff Moyer of the Rodale Institute is a great resource) and became interested in trying it for our cattle operation.  Later that summer we met Dana Jokela (who previously wrote about his experiences using a roller/crimper) who showed us ISU’s roller/crimper at the ISU Horticulture Research Station and we were even more intrigued. The idea of gaining all the benefits of a fall-seeded cover crop like winter rye + hairy vetch while producing several thousand pounds of carbon per acre in the form of a weed-suppressing mulch and then using the roller/crimper to kill it in the late spring without tillage or herbicides was too appealing to ignore. Plus we could no-till drill a warm-season forage mix right into the mulch. We would have to give up some late fall/early spring rye grazing in order to ensure the highest biomass production, but by late April the cattle usually can’t keep up with our perennial forages anyway.

On September 29, 2014 I drilled about 100 lb/ac of VNS winter rye into a stand of buckwheat. There was already some volunteer rye in that field from a rye crop that we combined in July. Between the fall of 2014 and this spring I attempted to locate and borrow a roller/crimper but I finally gave up. I looked at a neighbor’s cultipacker but decided not to try it because I didn’t think it would kill the rye. Fortunately Bruce Carney kindly lent me his cultimulcher (Picture 1).  It wasn’t as easy as that though. Meg and I drove 2 hours each way to pick up the cultimulcher, borrowed a neighbor’s 20’ flatdeck trailer, borrowed a neighbor’s John Deere-to-Pioneer hydraulic adaptors, loaded the cultimulcher with two tractors at Bruce’s, unloaded it at a neighbor’s with a tractor and a telehandler, accidently dragged it through part of that neighbor’s yard and tore it up, accidentally tore the trailer light cable off at Bruce’s, and managed to break a weld while transitioning the cultimulcher out of transport mode. Not a great start.

Finally on June 2nd I was ready to try out the cultimulcher (Pictures 2, 3). There was a heavy rain forecast for the next day so it was now or never. I started in the morning and the 5-foot tall (Picture 4) rye tended to plug up the cultimulcher until later in the day when the sun came out and the wind dried up the dew. The cultimulcher left a narrow strip of standing rye in the middle of the pass so I overlapped about 50% on each pass to eliminate that unrolled strip. I also learned not to try turning- even in a wide arc- with the cultimulcher down because the rye tended to catch in the roller wheels and tear out by the roots and jam up the implement. I finished the initial pass (which was effectively rolled twice due to the overlap) and then hit any patches that were still standing. I was able to run at about 5 mph. 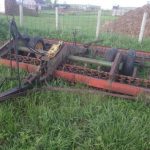 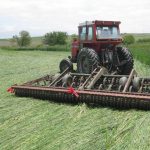 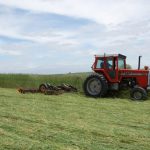 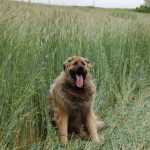 There was quite a bit of volunteer buckwheat from 2014 under the rye but it didn’t seem to be physically affected by rolling, maybe because it was only about 3 inches tall. Later that same day I drilled a diverse mix of warm season forage annuals into the mulch with a Crust Buster no-till drill (Pictures 5, 6). I was able to see my previous pass when drilling with the direction of the rolled rye because the drill would move some soil, otherwise it just disturbed the mulch and was very difficult to see. A single pass with a front-mounted roller/crimper and a drill or planter on the back would have been much easier.  The drill occasionally sliced clear through the rye stems- somewhat defeating the goal of a rooted but dead cover crop- but otherwise got through the thatch without problems. Very little of the residue was dragged by the drill although it did rearrange it somewhat. 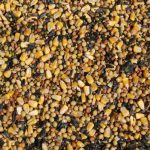 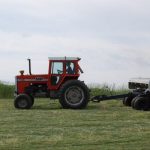 The rye left an amazing mulch (Picture 7). Incidentally the rolled rye was about as slick as it looks; I managed to spin the tires a few times. Drill skips from the rye seeding left bare ground when the rye was rolled and it became clear why Rodale highly recommends a very heavy, consistent cover crop stand with 100% cover to roll for weed suppression. To help ensure good biomass production I had approximately 1 ton/ac of chicken litter applied in March. I clipped three rye biomass samples just before I rolled it and the average was about 6,000 lb dry matter/ac (Rodale recommends at least 5,000 lb/ac). Rodale’s recommendation to roll at a 30-90 degree angle to the original drill rows also helps to minimize any gaps in the mulch between rows. The cultimulcher did not crimp the stems as often as the 1 crimp/7 inches that Rodale’s roller/crimper design produces, but it did not seem to affect termination. The rye along the field margins where I checked was at virtually 100% anthesis (as confirmed by my pollen allergies). However when I got out into the middle of the field hardly any of the rye was flowering although it was all headed out. That also did not seem to affect the effectiveness – virtually all of the rye is at least top-killed and looks like straw (Picture 8) although there are new rye basal sprouts popping up in places (Picture 9). These don’t worry me too much because they are likely to be grazed along with the warm season mix later this summer, eliminating most of the potential for volunteer rye next year. 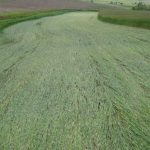 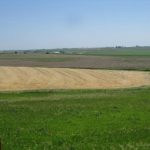 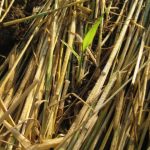 If this works- i.e., the rye stays dead, the warm season annuals are productive, and most of the annual weeds are suppressed- I will be very excited to continue this experiment. If 50% of that 6,000 lb/ac of rye is turned into humus that will essentially add an extra 0.15 percentage points of organic matter to the soil every year. Maybe that’s not much in the short term, but after doing that for several years soil organic matter should improve enough to justify any extra management issues or equipment purchases.