It’s no surprise that most landowners are aware of the Conservation Reserve Program, as it’s the largest private-lands conservation program in the U.S. It was signed into law in 1985 to make rental payments to farmers for removing environmentally sensitive farmland from agricultural production through 10-15 year contracts. A recent survey of PFI members show over 200 PFI landowners have used or are currently enrolled in CRP, almost double the enrollment numbers for Conservation Stewardship Program (CSP is a “working-lands” program).

What’s not as well-known as CRP is the newer CRP-TIP, or Transition Incentives Program, created in the 2008 Farm Bill to help beginning, socially disadvantaged, or veteran farmers access valuable farmland while conserving natural resources. Retiring farmers or landowners who are enrolled in CRP with a contract set to expire are eligible for two extra years of CRP rental payments if they rent or sell their land to a new farmer who uses approved sustainable practices (and who is not a family member). The new farmer must develop and implement a conservation plan for the land, which includes sustainable grazing practices, resource-conserving cropping systems, or transition to organic production. The new farmer will also have the opportunity to enroll in CSP, EQIP, and/or re-enroll portions of the land into CRP for conservation buffer practices. CRP-TIP is administered through the USDA’s Farm Service Agency (FSA), though the National Resource Conservation Service (NRCS) is responsible for approving TIP conservation plans.

Although PFI members have not been surveyed about their use of the Transition Incentives Program, I imagine our membership somewhat reflects the state of Iowa: It’s underutilized. Iowa was allocated a large amount of funding for TIP but has seen comparatively low interest in the program (see figure 1).  For instance, Minnesota has transferred over 19,000 CRP acres to 146 beginning, socially disadvantaged or veteran farmers, with $2.2 million in payments made to retiring farmers or landowners. Other states such as Washington are expected to run out of funding prior to reauthorization in the next farm bill, having already paid out 70 percent of their allocated funds. 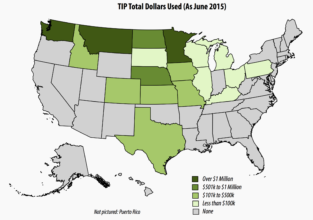 With one of the highest numbers of CRP acres set to expire at the end of fiscal year 2016 (over 200,000, see figure 2), and with plenty of TIP funding still available, Iowa is in a good position to take advantage of this program over the next year. Plus, if we don’t use it we lose it. 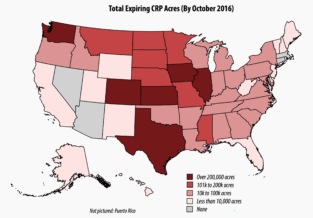 Kayla Koether and Landon Corlett are PFI members and beginning farmers in northeast Iowa who have traveled the world in search of knowledge and experience that will help them start their own custom grazing operation. The two have a passion for sustainable agriculture and have mindfully developed a clear vision for their contract-based rotational grazing business. Like most beginning farmers, though, access to land is a major barrier.

Fortunately, Kayla met PFI member and landowner Deb Jacobi. At a Women, Food and Agriculture Network meeting where Deb talked about her land set to come out of CRP in 2017, PFI’s Sarah Carlson suggested she look into the Transition Incentives Program, which led Deb to a local FSA meeting where she and Kayla connected based on their mutual interests. This led to a few trips to their local NRCS and FSA office and they are now preparing for the sign-up process.

We know many beginning farmers in PFI’s network are in a similar position to Kayla and Landon. Given the demographics of landownership in Iowa, we can assume there are many conservation-minded PFI members who, like Deb, could benefit by partnering with beginning farmers. The land Deb stewards in northeast Iowa was originally purchased by her parents and includes 100 acres of native grasses in CRP for 20 years, protecting the sloping landscape from erosion. As the contract nears expiration, she wanted to find a way to continue managing it in a sustainable way, and ideally support the next generation of farmers at the same time. CRP-TIP offers a promising option to accomplish both goals.

But not everyone in this situation has the good fortune of finding a match. In fact, this is a common complaint about the program due to constraints set on what data the FSA is allowed to legally share. Fortunately, the FSA developed a website to facilitate this, TIP Net, where any USDA customer can log in and place an ad about their expiring CRP acres or their land needs as a new farmer. Unfortunately, there are currently no listings for expiring CRP acres in Iowa (and only eight ads from new farmers, all but one of those being five years old).

What worked for Kayla, Landon and Deb might work for you: try your own networks. Kayla and Deb met by chance at a local meeting, but PFI can help, too! Create an account on FindAFarmer.net to advertise the CRP land you will have available for TIP, or as a beginning farmer tell your story and describe your land needs. Learn more about Find A Farmer here, and feel free to contact me at steve@practicalfarmers.org for any further assistance. 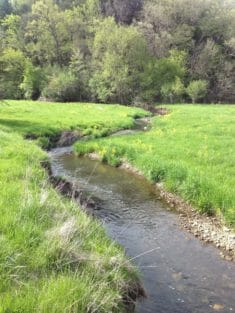 We’ll continue to monitor Kayla, Landon, and Deb’s situation as they go through the process of signing up for CRP-TIP, which they hope to have in place before Deb’s CRP contract expires in 2017. At this point in the process, they’re glad they started the conversation early because they’ve run into a few hiccups. Here are a few of the issues to keep in mind:

-TIP has primarily been used for row crops, and not rotational grazing as a conservation practice in Iowa. Also, due to under-utilization, don’t be surprised if your FSA office doesn’t have experience with the program at all.

-We’ve also learned about inconsistencies between offices’ interpretation of the program details, so you may consider talking to a neighboring FSA office or the state FSA office for another opinion about your situation. For example: the FSA defines a “retired or retiring owner or operator” as: an owner or operator of land enrolled in a Conservation Reserve Program (CRP) contract who has ended active labor in farming as a producer of agricultural crops or expects to do so within five years. We’ve learned this has been a source of disagreement between local FSA offices.

-CRP-TIP allows the beginning farmers to start making “improvements” to the land one year before the contract terminates and TIP begins, so it’s important to start the process a couple years before the CRP contract expires. Also, these land “improvements” cannot be cost-shared with federal funds (such as CSP or EQIP; state money is OK).

-The program requires communication between the FSA and NRCS. The FSA administers CRP and CRP-TIP, while the required conservation plan needs to be approved by the NRCS. Also, the beginning farmer has an option to enroll the CRP land in CSP or EQIP, which are both run by the NRCS.

Contact your local FSA office for more information about CRP-TIP

Read more about CRP-TIP from the National Sustainable Agriculture Coalition

Read more about CRP-TIP from the Farm Service Agency