Everything fell into place for Julie and Adam Hohl to move from St. Louis to Adam’s family’s farm in Donnellson, Iowa. But Adam and Julie wanted to do something a little different than the traditional farming. Though neither Kathy (Adam’s Mom) nor Julie had any agronomy experience, they revived Adam’s old 4-H project: pumpkins. Ten years after their first “circus tent” farm stand on the side of Highway 2, Harvestville Farm is a popular fall destination… and the host of a recent PFI field day focused on farm safety for agritourism. 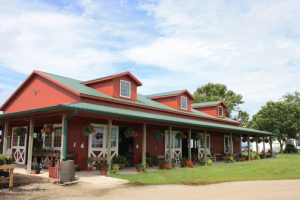 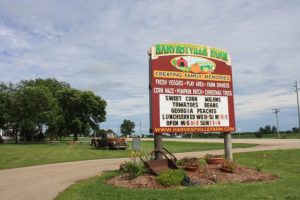 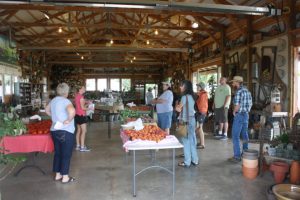 During the summer (May – mid-September), the three Hohls are the sole employees, with Mary Ann, a retired neighbor. Christmas time is the same, with one additional designer. During the fall, however, everything changes. Harvestville brings on 25-35 employees to manage the 5,000-8,000 school kids who come to the farm during October, and the thousands more who visit each weekend.

On employment: “We find our own employees,” said Kathy. “We have one phenomenal high school boy, but we have found over the years that retired people who still want to be active are the hardest workers, don’t need as much direction, have great common sense, and really earn what they make.” They also have a group of college boys that parks cars and directs traffic on weekends, and some younger people working in the concession stand.

Hosting school field trips is an important job during the week in the fall. Kathy or Julie leads each field trip, which includes educational talk time, a wagon ride, pumpkin pick, and play time. In addition to planning for future regulation, being ADA-compliant is helpful to special-needs school groups. Handicap parking is available, the retail space has a wheelchair ramp, and the new restrooms have large handicap stalls (plus the family restroom is handicap accessible). “We get a lot of special needs groups to the farm, and we have several times loaded wheelchairs into the wagons. We can always do it. The path in the corn maze is also wide enough to easily get through with a stroller, wagon, or wheelchair. In the fall we try to have a lot of activities for autistic children, focused on sensory experiences.”

But all of these visitors need a place to park. Harvestville has a small gravel lot,  but in the fall opens up a grass lot adjacent to the road. One of the largest struggles for Harvestville Farm was getting the Iowa Department of Transportation (DOT) to put up “No Parking” signs along Hwy. 2 at the farm, where the road is 55 mph.

Said Julie, “They told us to make our own signs, which people just ignored. The last straw for us was one weekend it was so busy – it was scary – and even with extra staff it was beyond our control. Cars were parked a long way in both directions on both sides, and there were so many kids crossing. We called 911, and they would not send anyone out. They said it wasn’t yet an emergency, and if they did it for us they would have to do it for everyone. After that it was just a lot of persistence. We called again and again. We also put “slow down” signs a mile in each direction. Finally we got the No Parking signs, which have helped immensely and people are now ticketed if they park on the road.”

Brandi Janssen, Director of the Iowa Center for Agricultural Safety and Health (I-CASH), was surprised by the resistance of the DOT. She pointed out that in other counties, the opposite problem exists. Some agritourism farms have trouble because they rely on road parking. The county and/or DOT prevent people from parking on the road and it hurts business. 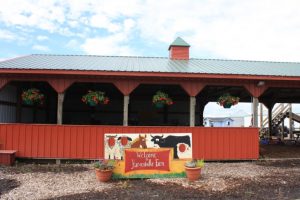 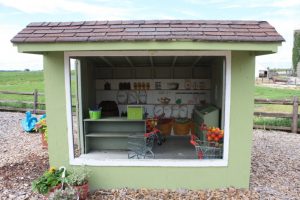 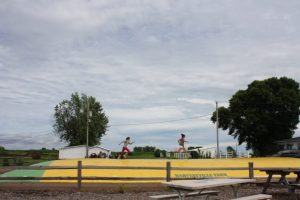 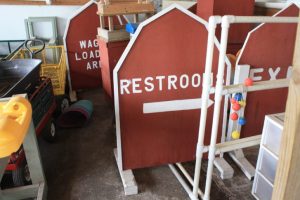 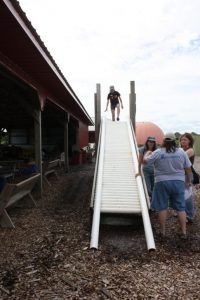 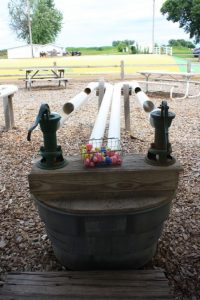 Next people moved to the play area, which is one of the largest concerns for the Hohls. “If we had a million dollars, we’d do a million new things for safety,” said Kathy. Harvestville is always making changes, as they seek to maintain an authentic farm experience while keeping visitors safe. The “Corn Pool” is one of Harvestville Farm’s most popular spots, especially for younger children. They fill a concrete “pool” about 8 inches deep with corn (which is tested for allergens and mold), and have buckets, shovels, and other toys to play with it. The toys are sterilized after every group visit, and all other surfaces in the play area are sanitized daily. Shoes are not allowed in the corn, signs remind parents not to let children throw corn or jump into the corn. The Corn Pool is supervised by a staff person at all times.

Brandi and Steph Leonard (also from I-CASH; the self-described “fun-ruiners”) brought up a philosophical point about playing in grain, and if it was counter to safety efforts and awareness about grain bin and grain wagon safety. Kathy acknowledged their point, noting that they consciously chose not to have a “Corn Bin” like most other farms, for this reason.

The play area was equipped with fire extinguishers and first aid kits, and all employees carry walkie talkies to communicate any issues. The ground of the play area is covered in mulch, which is replenished every year. A few safety issues were highlighted, including the ease of climbing through the split rail fence to “no access” areas and hand rails needed above six feet on the rolling PVC slide. Brandi and Steph recommended adding a fence beyond the split rail (which has a nice aesthetic) that can’t be easily climbed or crawled under, like a slatted snow fence or welded wire fence. “When you have people on your farm, they’re going to walk everywhere – you have to really have to herd them where they are supposed to be.”

The jumping pillow presented a unexpected problem when the sand near the end became compacted from kids sliding off. Now after each jumping session (3-5 minutes) a staff person checks the sand and moves back to the edge as needed for cushion. The pillow is also supervised at all times.

Kathy and Julie shared their employee handbook and safety and crisis plan with field day attendees, as well as their employee and guest incident report forms. “The safety of our guests is only as good as the training of our employees,” said Kathy. The safety and crisis plan for Harvestville Farm was reviewed by the local fire department and the chief of police. Harvestville Farm shares detailed maps of the farm and corn maze each year with first responders, including police, fire department, and EMTs. The corn maze also has guided emergency exits, and all children under 12 must be accompanied. Everyone must have a maze map and a cell phone when in the corn maze. The maze is also supervised at all times. 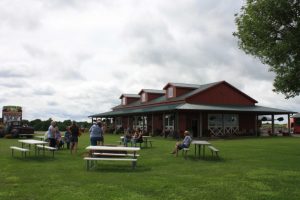 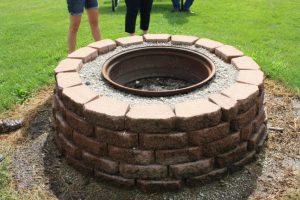 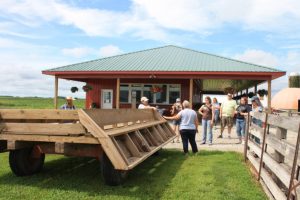 The Wagon: To pick pumpkins, guests are taken on a “people mover” out to the pumpkin patch. Kathy displayed their “least safe, but most enjoyed” people mover. Adults sit on the benches and face out; children and strollers are loaded into the middle. She knows ideally all their people movers would have rails and keep everyone inside. We all thought this wagon was pretty comfortable, though. Drivers do routine inspections of the wagons and tractors including tire pressure and condition, and check the condition of the route to the pumpkin patch daily prior to the first trip.

The most recent venture for Harvestville Farm is the new commercial kitchen, which serves lunch, concessions, bakery items, and provides food for the new “farm dinners”.  This will be the first full season for the new kitchen, and Kathy and Julie are interested to see if guests follow through on their interest in “healthier” concessions (the Hohl’s 3-acre garden supplies produce to the kitchen). The three Hohls rotate their Serve Safe trainings so two of them are “current” at all times.

In the same building are the new restrooms. Until this time, the farm brought out four port-a-potties for guests. To be in compliance, the restrooms they built had to accommodate the number of people that can be in the retail space at once (around 100). Four stalls in the ladies, two stalls in the gents (plus two urinals) and a single family restroom. Regulations also required Harvestville Farm to build a lagoon sized to accommodate the maximum capacity of the entire year. But because Harvestville is only open May – December, and only busy in October, it just didn’t make sense to them. They applied for a variance from the health department and the state. “We have the largest septic tank available, and want to try pumping the tank for a year before investing several hundred thousand dollars in a lagoon. Our hope is that the data will show we can get a smaller lagoon or that the state will agree to let us continue using the tank and just pumping a couple times during October.”

Perhaps the most valuable advice offered by the Hohls, again and again, was that early and clear communication with regulatory agencies makes an enormous difference. Regulations vary from county to county and even by town. Knowing who to ask allows you to avoid problems before they occur (the Hohls even have their State Farm agent on speed dial). Farmers interested in learning more about agritourism safety should contact I-CASH and look through the Marshfield Clinic publications on safety.

The Hohls wrapped up the field day by serving pulled pork, watermelon, green beans, chips, and an amazing peach cobbler with ice cream while chatting with attendees in their new kitchen.