Long-time PFI farmers Doug Alert and Margaret Smith welcomed close to 60 people to their organic farm, Ash Grove Farm near Hampton, on July 7 to learn about beginning and advanced organic farming tactics. Chief among the topics discussed was terminating a cover crop with the roller-crimper method. It had been several years since Doug and Margaret last held a field day. Attendees were excited to return and learn! 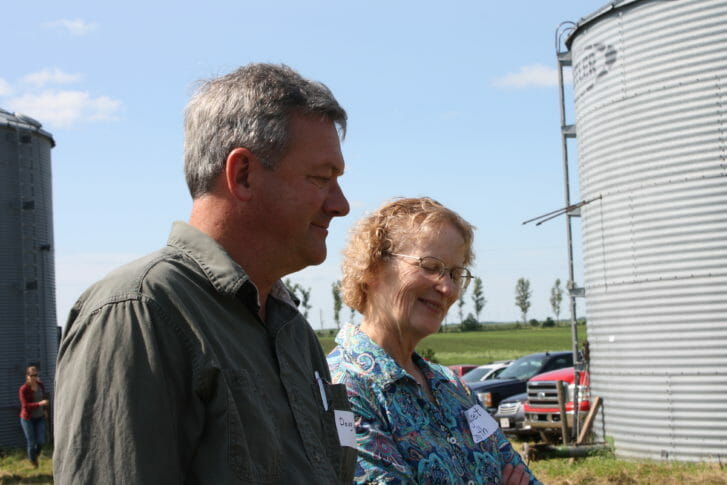 Doug Alert and Margaret Smith welcome people to Ash Grove Farm for their first field day since the 1990s.

Doug and Margaret kicked things off on the “advanced tactics” side of things. After conducting a considerable review of scientific literature over the years, Doug and Margaret decided to this year try pairing organic and no-till farming practices in one corn field. Last July, after harvesting cereal rye grain, Doug seeded hairy vetch and oats as a cover crop. The oats died with the first hard frost but the hairy vetch survived the winter and came back this spring. 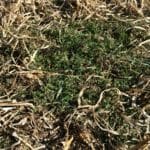 Hairy vetch at Doug and Margaret’s coming out of dormancy in March.

Doug and Margaret sought to terminate the hairy vetch before planting corn in an organic, no-till situation using the rolling-crimping method that has been pioneered by the Rodale Institute. In order to do this, they had to wait until the hairy vetch reached the full bloom stage—this happened to occur in early June and the hairy vetch was about four feet tall. Margaret estimated that they had about three tons of aboveground biomass per acre by early June.

To roll-crimp the hairy vetch, Doug used a modified Buffalo corn stalk chopper. Why didn’t he use the standard Roller-Crimper touted by Rodale? None exist near them in Iowa. And given that they can be a rather expensive implement, Doug and Margaret decided to experiment with the technique of rolling-crimping using modified equipment before purchasing a new piece of machinery. 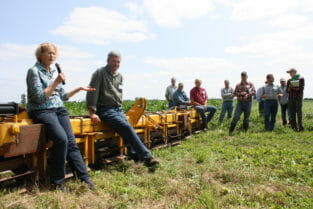 Margaret and Doug lead a discussion on terminating a cover crop in organic production without tillage.

Doug rolled-crimped the hairy vetch on June 6 and then planted corn into the flattened mat on June 8. The day we toured the field (July 7), Margaret had the attendees conduct a couple of in-field exercises to help answer two questions: how well did we terminate the hairy vetch? and how well did the corn planter perform? A series of 3-4 person teams used the line-transect method to determine that Doug and Margaret achieved on average a 70% kill rate on the hairy vetch. Other attendees conducted corn stand counts and determined a population of 19,800 plants per acre. This was well below their goal for 33,600 plants per acre. Doug explained that his planter was probably not best suited to no-till planting through such a thick mat of rolled hairy vetch residue. He expects to make some modifications to his own planter or rent the necessary planter when he tries this again next year. It has definitely been a learning experience, and in the spirit of PFI, Doug and Margaret are looking to refine their methods to see if they can make organic no-till work for them. 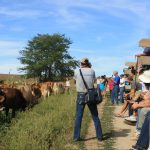 For the sake of comparison, Doug and Margaret also addressed how they normally raise corn in their rotation—red clover is frost-seeded into the cereal rye and is then plowed under the following spring before planting corn. This method does allow Doug to plant corn earlier (May 22 this year) and with better precision (30,600 plants/ac) but also requires a number of tillage passes in the spring as well as the attendant suitable field conditions. Doug and Margaret were quick to point out one of the most appealing aspects of the alternative they are exploring—the rolling-crimping method eliminates spring tillage and distributes labor across the growing season. To illustrate this, they provided this handout listing all field operations and inputs for their two methods: “No-till and Tilled Comparison for Corn following Rye grain: Production Costs.” 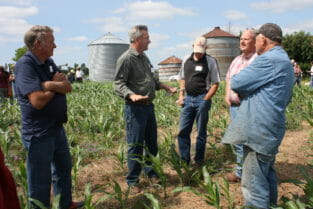 The field day next moved on to a discussion on transitioning to organic crop production. Doug and Margaret first began transitioning land into organic production 20 years ago. Not transitioning all of one’s acres into organic production at first is a good way to go, say Margaret and Doug. Start small when you are a beginner. For starters, they suggest seeding a small grain + legume underseeding in the first year of transitioning. A “solid seeding” such as this helps to compete with weeds and small grains tend to be on the lower end of the spectrum in terms of demand for nutrients. Devoting a larger proportion of one’s acres to a solid seeding—crops drilled in narrow (7–8”) rows—reduces the amount of acres that need to be hoed and cultivated for weed control, which can save one time and labor. 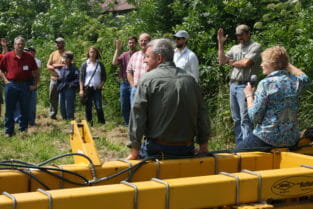 Margaret leads the discussion on transitioning by asking who in the audience is thinking about transitioning to organic crop production.

Having 20 years of experience, however, affords Doug and Margaret a little leeway in the transitioning department these days. This year they began transitioning a farm they just started renting from the mother of fellow PFI member Connie Tjelmeland. Instead of seeding the entirety of the acres to a small grain + legume, Doug and Margaret divided the acres into thirds: 1/3 oats + clover; 1/3 corn; 1/3 soybeans. “I wouldn’t have done it this way in the past,” says Doug, “but we wanted to speed up the transition process this way by having all phases in the crop rotation present. Being experienced is the only reason we chose to do it this way this time around.” 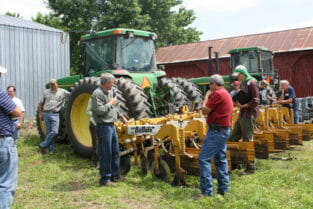 Doug talks about their Buffalo cultivator while attendees Scott Shriver and Luke Gran take a close look. “Experience is helpful, but the right equipment is essential,” says Doug.

Doug also spoke about the equipment they use in their production system. In no uncertain terms, Doug insists, “Experience is helpful, but the right equipment is essential.” Furthermore, Doug explained the importance to him in having more than one of the same pieces of machinery. “If something breaks down (like a cultivator), it’s highly unlikely that any of my non-organic-farming neighbors has that same piece of equipment.”

More information and tips from Doug and Margaret can be found in this handout: “Transitioning to Organic Production/Certification.”

The day ended on the topic of growing oats in their organic crop rotation, which Doug and Margaret market as seed to Albert Lea Seed House, Doug explained his strategy for harvesting. He likes to use a swather to cut the oats around maturity and then use a pickup head on his combine to harvest after they’ve sufficiently dried in the windrow in the field. Doug likes using this strategy because he doesn’t have to time harvest exactly when the oats are ready after maturing and also because of the forage legume underseeding they include with the oats—red clover in most cases. If Doug tried to directly combine the oats, he worries about putting a substantial amount of green red clover tops through the combine. By swathing the oats (and the tops of the red clover), the clover is dry in the windrows and moves easily through the back of the combine when harvesting the oats a few days later using the pickup head.

From advanced to beginner, and everywhere in between, you were sure to learn something at this excellent field day!