Twenty five individuals chose to disregard the rainy forecast and travel out to Mogo Farms on the afternoon of July 6, eager to hear about the unique collaboration between Mogo Farms’ Morgan Hoenig and Muddy Miss Farms’ Shanti Sellz. The two young farmers make up Green Share LLC, a collaborative CSA that serves the Iowa City and Mount Pleasant areas through an 80 member CSA, four restaurant CSAs, a small wellness CSA, and local farmers markets.

With dry conditions at start time but knowing rain was on the way, the group went directly out to explore the gardens at Mogo Farms. Morgan showed attendees her two hoop houses and the many gardens that make up her six acre farm, as well as a couple tractor implements owned collectively by Green Share LLC.  Morgan explained how larger pieces of equipment like a mulch layer or a crop lifter may only get a small amount of use in a year—and regardless of the labor savings, wouldn’t be a feasible purchase for a beginning farmer. However, purchasing these through the LLC lets them share the cost and allows everyone to benefit. Attendees were warned, though, about the likelihood of multiple farms in the LLC needing the equipment at the same time, and to avoid these by planning, communicating, and being flexible. 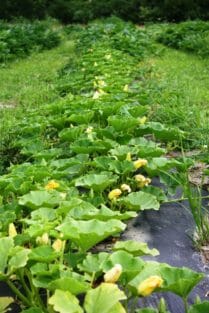 Cucurbits are back at Mogo Farms this season after a year at Muddy Miss Farms.

A number of stops on the tour served as examples for the benefits of a collaborative partnership, not only for equipment purchases but for shared labor and crop rotations between farms. Morgan led us to her squash patch, where she described the terrible squash bug infestation she experienced in 2013. In 2014, they simply planted all squash on Shanti’s farm. This year Morgan has cucurbits back on her farm and hasn’t had near the trouble with squash bugs as in 2013.

Shortly before the rain arrived, attendees made their way into Mogo’s pack shed where everyone enjoyed some tasty snacks from the farm and delved into the details of Green Share LLC. Morgan formed the group in 2013, citing the stressful 2012 drought as a major reason for seeking collaboration. Being able to specialize and focus on fewer crops is a huge benefit for a collaborative CSAS. “When I did the CSA on my own, there was so much anxiety… I’m mentally much more stable now,” Morgan half-joked.  She and Shanti are able to plan their crops with one of them taking the lead and the other growing only a back-up supply. For instance, Morgan is growing the bulk of their broccoli for spring harvest with Shanti growing a smaller supply, and vice versa for the fall planting.

Having been formed by Morgan and two other growers who are no longer with the group, Green Share LLC now consists of Morgan and Shanti as the two primary members. They work with three other farms that have agreed to provide a handful of other crops such as asparagus and perennial fruits, and they shared with attendees the contract they use for such an arrangement. One of the biggest problems they’ve run into relates to quality control and packing standards among many growers. If one farm is providing 12 bundles of swiss chard to a restaurant early in the season, and another farm provides later in the season, that restaurant will expect a consistent bundle size and quality level.  It’s important to establish these expectations with all growers up front, and the two farmers strongly advise to put everything in writing, saying, “It saves friendships!”

The relationship between Morgan and Shanti lends itself very well to a collaborative CSA model, as they each bring something to the table that benefits the other. Mogo Farms provides the stability of a permanent 6 acres of tillable land, but its location in Mount Pleasant lacks a solid market. Muddy Miss Farms has established a consistent market in the Iowa City area, but lacks the stability of land ownership. Shanti has found herself farming in three different Iowa City locations in the past four years, a situation that made her uncomfortable until joining Green Share LLC. “I’m a pretty vulnerable farmer, but the cooperative is a constant,” she explained. Also, Mogo’s more southern location in Mount Pleasant allows the LLC to bring crops to the Iowa City market a couple weeks before everyone else, providing a competitive advantage over others. 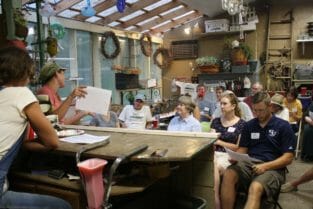 Morgan and Shanti shared some spreadsheets that aided the discussion on crop rotations, record keeping, and invoices.

The field day wrapped-up with attendees participating in a great Q and A session as rain pounded the pack shed. Morgan and Shanti discussed future improvements to their LLC, including a formal exit strategy for any farms leaving as well as the potential for other farms to fill a niche, such as an egg producer. For more information about collaborative CSAs, they recommend the book “Sharing the Harvest.”