A colorful bus filled with laying hens welcomed 65 guests to the field day Doug Darrow and Justin Wade hosted at Rapid Creek Ranch near Oxford on Monday, July 13. Doug and Justin held the field day to share with others what they have learned while transitioning their farm from row crops to a mob-grazing system.

Doug planted the last corn crop on their 160-acre farm in 2005. Since then he has been making improvements to support mob-grazing, in which cattle ‘mob’ a pasture for a short duration, with long rests in between. Currently the animals are on a 66-day grazing pattern; they spend one day eating down a paddock, move to a new paddock daily, and will come back to that same paddock in 66 days. A 300-foot lane runs the length of the farm, with additional lanes every 330 feet. This configuration eases moving cattle in a zig-zag pattern across the pasture. 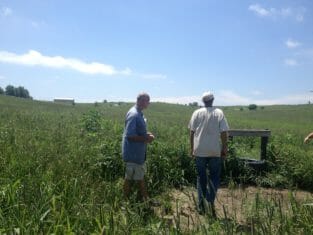 Field day attendees took a hayride across Rapid Creek Ranch. Along the way, Doug and Justin pointed out their extensive watering system. “A good watering system means I can graze longer into the winter,” said Doug. With the help of NRCS and EQIP money, Doug installed 8000 feet of water line. He also installed Cobett Livestock Waterers, made in Peru, IA. Doug has been very pleased with the performance of these waterers so far, both in function and durability. Some are 25 years old and Doug has not needed to replace any parts.

Doug is working to transition the farm to a system that requires less machinery and labor. One way they are doing this is investing in smaller genetics that perform well on grass. To do this, Doug recently invested in two Pharo bulls. At $8000 each, this substantial investment should create major changes in the genetics of the primarily Angus herd. Doug said that when he got out of the truck to look at the Pharo bulls, he first thought the two he ultimately purchased were just feeder calves. Their frame scores were 2 to 3, much smaller than the other two bulls he had at home on the farm. Doug mused that a lot of people who criticize the taste of grass-fed beef are eating cows that got too big on grass and don’t taste good. Smaller animals are better suited to the lifestyle of grazing cows, compared to larger cattle better suited to put on weight in feedlots. 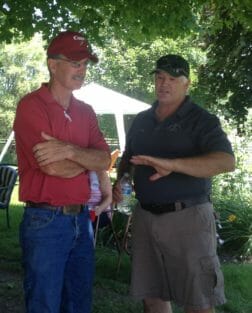 Another thing Rapid Creek Ranch is doing to transition to more grazing-friendly system is moving their calving date to May. This helps avoid complications winter adds to calving; mothers are able to recover from winter and provide ample milk. Calves also have more abundant pasture for feed.

Doug feels a focus on soil health is the driving force behind a successful grazing operation. He has started evaluating soil health through Haney tests rather than traditional soil health tests. “If the soil biology on my farm is good, N, P and K should take care of itself,” said Doug. This soil test takes a novel approach to determine soil microbial activity, carbon and nitrogen concentration, and overall soil health. Many PFI members are interested in learning more about their soil through the Haney test. Ward Labs is the closest lab performing this test.

Right now, Haney tests from Rapid Creek Ranch come back at 7 and 8, and Doug’s goal is to increase his soils’ levels to 10+ by the Haney scale. 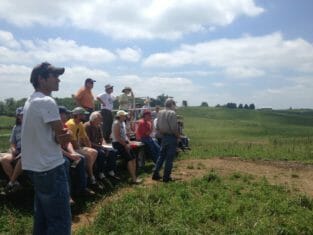 Pat Wall, ISU Extension Beef Field Specialist, gave a presentation on cow size and milk. His take home message was the argument over whether bigger or smaller cows are more profitable is not winnable. Traits are more important than weight. Will cows produce abundant milk for calves, gain weight at a suitable rate, eat weeds, flourish in your environment, with your pasture mix, etc.?

Click here to view Pat’s handout from the field day.

Rapid Creek Ranch’s seed mix is about 60% legumes and 40% grass. Some of the species include Outsidepride clover, mammoth clover, alfalfa, birdsfoot trefoil, timothy grass, orchard grass, brome grass, and fescue. Doug has not had issues with bloat on the farm. In addition to a diverse pasture mix, animals get a custom kelp-based mineral program from Solon Feed. 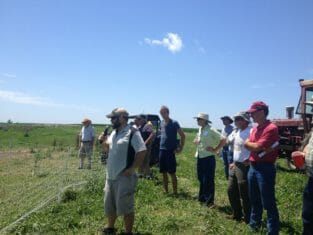 Rapid Creek Ranches’ foray into chickens started with 500 spent hens. Justin built a chicken scooter from PVC pipe to house the hens. The first winter the wind swept the structure away. Justin replaced the scooter with Salatin-style eggmobiles he made from hay racks. These worked better, but still were susceptible to wind damage. Last year they added the school bus to house their laying hens. Not only does it provide a festive entrance to the farm, it is resilient to the wind the farm gets.

Justin prefers hoopies he has built based on University of Wisconsin’s plans to Salatin-style chicken tractors.  These consist of four cattle panels wired together and folded into a hoop. It takes Justin 45 minutes to feed and water the chickens, move the hoopie and the fence. He moves the hoopie each day, and the fence every 3-4 days.

Justin has built heated nest boxes that they have had good success with in the winter. He also plans to build hoop buildings for added winter protection. 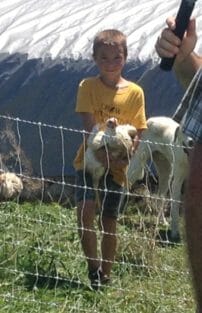 Vinnie displays a chicken for the crowd

The farm plans to continue to increase the scale of the poultry business. At the time of the field day they were raising: 300 layers, 350 pullets, 300 broilers and 385 chicks. Rapid Creek Ranch raises Isa Brown Layers from Hoover Hatchery, Freedom Rangers and Cornish Cross Broilers.

Poultry has been a good addition to the farm. Predators, including minks and raccoons, do cause some trouble. But the recent addition of two guard dogs has seemed to help.

The biggest hurdle to the farm’s poultry enterprise is that the closest processor is two hours away. Not only is it far, it is difficult to schedule processing. Justin has to call and schedule for a batch of broilers before he even gets them in.

Marketing has been successful for all farm products. Justin and Doug sell at Iowa City Farmers Market as well as other small farmers markets in the area, through the Iowa Valley Food Coop, and from the farm. They aspire to increase on-farm sales.

Doug and Justin hope that along with a nice hamburger lunch (prepared with Rapid Creek Ranch beef, which was delicious) and good company, attendees took away this from their field day: