Field Day Recap: The What, How and When of Cover Crops at J Boyer Farms, July 8

Jack and Marion Boyer welcomed people to their farm in northern Tama County on July 8 to learn about the what, how and when of cover crops. Jack has been using cover crops for several years on ground they raise corn, seed corn and soybeans and is convinced of the benefits to their soil. As he’s gained more experience, Jack has also begun conducting his own on-farm experiments with cover crops. 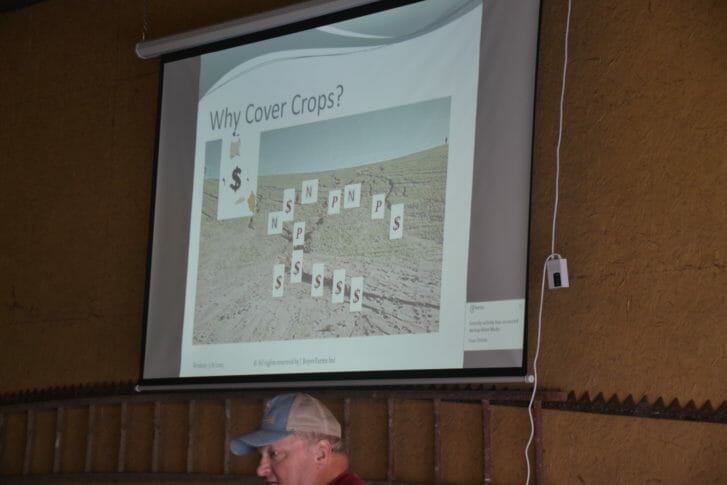 Jack uses cover crops because he sees bare soil as a pathway for soil and nutrient (and $$) loss.

Jack started things off by explaining why he uses cover crops on their farm. Soil loss from erosion and leaching are pathways for nutrients to be lost from the farm. Those nutrients (particularly nitrogen and phosphorous) cost money to put there so it’s in the farmer’s best interest to keep them in the soil for the crops. 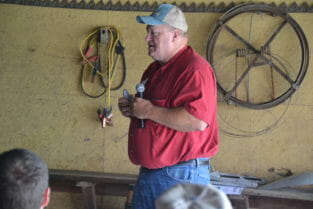 Jack welcomes the crowd of over 50 people to his farm.

Jack’s cover crop of choice has been cereal rye. He can establish it in the late summer aerially or in the fall with a drill or air seeder and it comes back in the spring to protect the soil from early rains before corn and soybeans take hold. In one field where he has now been using a cereal rye cover crop for 5 years, Jack has begun to observe an improvement in soil health as determined by the Haney Test.

ISU entomology graduate student Mike Dunbar addressed a very timely issue: true army worm infestations in corn following a cereal rye cover crop. In the 5+ years Mike has been observing corn fields across the state, this is the first year he has witnessed true army worm infestations in fields with cover crops. He and the rest of his lab at ISU are not sure why true army worms became such a problem this year. They think that a “perfect storm” happened this year–that everything was just right for the true army worms to become a problem this spring. You can read more about this topic in a guest post Mike helped to author earlier this year: “True armyworm, cereal rye cover, and no-till: an unfortunate combination in 2015.”

In August 2014, Jack implemented a cover crop seeding date trial in his seed corn field as part of PFI’s Cooperators’ Program. He observed that the cereal rye seeded into the standing seed corn in August put on more growth in the fall and Spring 2015 than the cereal rye seeded in September 2014 after the seed corn was harvested. With that increased growth, Jack also saw more nitrogen sequestered in the cover crop rather than being vulnerable to leaching in the fall and spring. You can read more about this project in a new research report: “Effect of Seeding Date on Cover Crop Performance.” 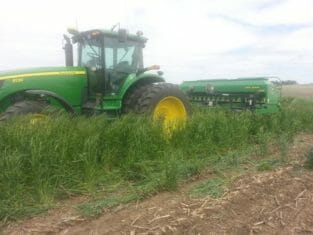 Jack drilling soybeans into tall cereal rye cover crop on May 18, 2015. The rye was terminated the next day.

This year, Jack has two ongoing experiments in his fields. One is a comparison of cover crop termination date ahead of soybeans planted on May 18: 15 days before planting soybeans and the day after planting soybeans. Jack shared that the cereal rye cover crop in the later termination date treatment was well over his knee. In the weeks since, Jack has observed far less weed pressure in the strips in his field where he had the cereal rye cover crop ahead of soybeans. He noted that there was much more weed pressure in the strips that didn’t have a cover crop. These strips will require another application of herbicide while the strips with the cereal rye may not. Jack sees this as an opportunity for the cover crop to pay off. 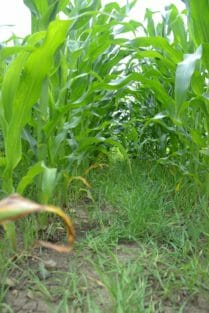 The other ongoing experiment on their farm again involves cover crop planting date. But it’s not what we typically think when considering cover crops in Iowa. On June 10 when his corn reached the V4 stage, Jack interseeded a cereal rye cover crop. Jack wants to know if one could establish a cover crop earlier in the season, have it go dormant under the corn canopy, and then have it take off again when the corn begins to senesce late in the summer and after the corn is harvested in the fall. When we were at the farm on July 8 we could view the cereal rye seedlings growing beneath the corn. Be sure to check PFI’s Research Reports this fall for the full take on this project.

The day concluded with Jered Finley of the Tama County NRCS putting on a rainfall simulator demonstration. The rainfall simulator shows how soil from different farm management strategies holds up under intense rain events. We were able to see that situations of bare soil and tillage result in very little water infiltration and a lot of runoff and erosion. Bare soil under no-till fared better in terms of infiltration but still showed signs of runoff and erosion. Adding a cover crop to the no-till situation improved infiltration and reduced runoff even further. The best strategy for improving infiltration and nearly eliminating runoff was that of a grass-based pasture.