Cooperators evaluated 21 cover crop entries (pure stands and mixes) in small, hand-seeded plots across the state. See all the entries in the table below. 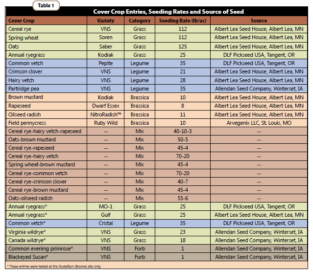 This iteration of the trial serves as a culmination of previous iterations conducted the past few years.

Among the key findings from the most recent iteration:

Given these findings, and those from the previous iterations, the 2015-2016 version will look a little different. Removed from consideration will be some cover crop species that have not performed very well and should probably be avoided in corn-soybean production systems in Iowa. Instead, the trial will involve the species that have shown the most promise as well as those successfully being used by farmers across the state that haven’t been previously investigated. The list mostly includes grass and brassica species as these have shown an ability to germinate and put on aboveground growth in the fall while legumes have not fared as well. From the next iteration we will seek to provide a comparison of fall and spring ground cover performance among the most suitable cover crops in the state. These include:

Again, the most recent iteration of the trial can be found here. This trial was made possible by the Walton Family Foundation.