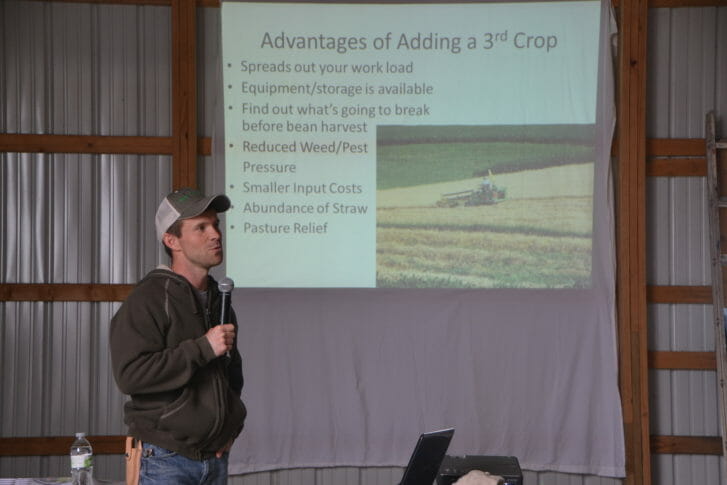 Bill Frederick explaining why they like to raise small grains on their farm.

Close to 50 people came to the Frederick family farm just south of Jefferson. Bill was quick to point out to the group that the entire family is involved in their operation, crediting parents, Al and Ann, and his wife, Melissa. Over the course of the day, we learned about the numerous enterprises on the farm and how they work together: cow/calf, corn/soybeans, hay, and small grains. Conservation has been a major theme on the Frederick farm for many years. Bill serves on the Greene County Soil & Water Conservation Commission following in the footsteps of his father and grandfather who previously served.

Bill credited raising small grains as being “low input” and contributing to a favorable margin by being able to integrate livestock. To break it all down, he provided handouts detailing their calendar of operations as well as some costs and returns. You can find more details in Bill’s presentation, Integrating Cover Crops and Livestock.

To begin, Bill focused on the small grains they raise on the farm: oats, winter wheat, and winter cereal rye. Chief among the reasons the Fredericks like to raise small grains is that it distributes labor well across the growing season. Bill explained that harvesting acres in July (when small grains mature) results in acres that do not need to be dealt with in the fall when there’s a lot of pressure to quickly harvest corn and soybeans. Getting the combine out in July is also a good time to work out any kinks or make any necessary repairs before the busy fall season. Additionally, grain carts and other storage are abundant at the time of small grains harvest in summer.

As far as markets go for small grains, Bill sees cover crop seed as a major outlet. For this reason, Bill has been trying to increase the amount of cereal rye they raise due to its popularity as a winter hardy cover crop. One problem the Frederick’s have been seeing with raising cereal rye is that of lodging. Cereal rye grows much taller than winter wheat (up to six feet) and as a result the rye is vulnerable to lodging with high winds or intense rainfall events. And unfortunately, that’s exactly what happened in late June to their rye crop this year. Despite this, they still achieved 40 bu/ac. Bill does like the prospects of marketing cereal rye as a cover crop and is planning on investigating nitrogen fertilizer application time and rate to see if that has any effect on potential for lodging.

Another theme for the day was late-season forage annuals planted after small grains harvest in July. Forage annuals increase the amount of grazeable acres on the farm, allowing Bill to keep more animals on the same amount of land. This is part of the way the Fredericks integrate crop and livestock production. Bill remarked that he likes the forage quality of the annuals compared to his perennial pastures at the late-summer/early fall stage. This year, they planted turnips, forage kale, oats, and leftover soybeans after cereal rye harvest. The plan is to let the cattle out on this young forage in the next two or three weeks. Bill cited a number of reasons why they like to plant forages after small grains harvest. For the most part, having high quality forage in the field later in the year reduces the need to make as much hay, extends the grazing season and cuts labor and stored feed costs.

James Holz, a feedlot and row crop producer in Grand Junction, spoke to the group about his cover crop practices. James grow rye and harvests as ryelage to feed back to his cattle. He recommends storing the rye in a bunker with a tarp over it. James mentioned that rye is difficult to pack, so wrapping bales is troublesome. Not only is rye offsetting an expense in the ration, it’s also providing straw bedding and armoring the soil when it would otherwise be bare.

Bill summed up their conservation ethic and production principles in his conclusion for the day: “Cover crops are providing us with an opportunity to use our creativity to solve a local problem that has global consequences. We have a chance to increase our biodiversity, build our soils, and help preserve our waters, all while making a profit in the process.”