On a beautiful late-August morning, 50 people gathered near Woodward to hear from Mike Bevins about growing native Iowa trees and shrubs. Mike owns and operates a nursery that specializes in growing plants native to Iowa, aptly named Iowa Native Trees and Shrubs. 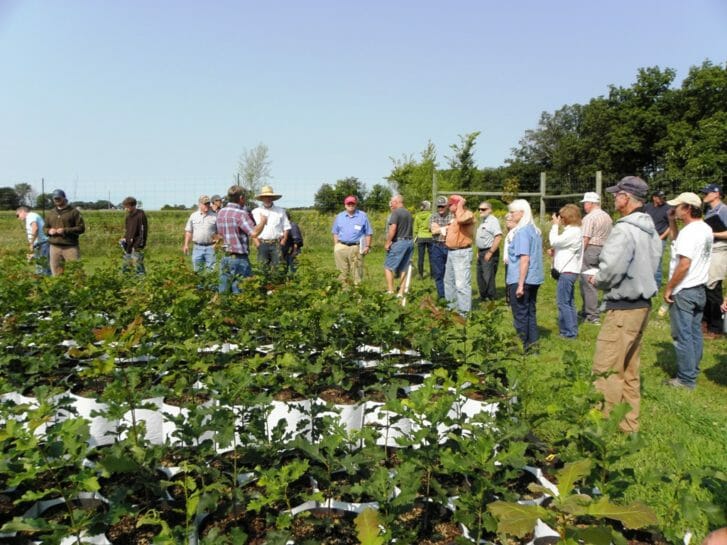 Anyone that’s known Mike over the past 20 years would probably refer to him as the expert on this topic, but Mike was quick to say he learned everything from researcher and author Carl Whitcomb, the real expert on nursery production. Carl holds dozens of patents, including the air root pruning containers Mike uses for everything he grows, and has authored several books that Mike continues to reference, specifically Plant Production in Containers II.

Mike explained that he worked for many years in the commercial nursery business, selling a wide range of trees and shrubs to customers before he started his own business and went completely “native.” He used the example of selling Ginkgo trees (native to China) to customers who liked the fact that they were virtually insect-free. The problem with that, he explains, is that without insects you’ll have no birds and much less native wildlife. “Native trees and shrubs provide the food, shelter and cover needed by the smallest of insects to white tail deer, and all the wildlife in between.”

The day focused primarily on the process Mike uses to produce his trees and shrubs, from seed collection to sale. The diverse group of attendees—orchardists, foresters, nurserymen, grazers, row croppers and landowners—were eagerly taking notes and asking questions, trying to take what they can from Mike’s system to adapt for themselves.

It all starts with sourcing local, wild seed: “I like to collect seed from the wild to get the wild genetics,” Mike explained. He’s scouted out trees in the area that he’ll continually return to when it’s time to collect.  This is virtually a year-round process because of the varying life cycles of trees and shrubs. Once collected, he cleans, dries, and stores the seeds near freezing conditions to be germinated later. For germination, some seeds do best if boiled (redbud, locust), some need to be notched (coffee), some soaked in alcohol (bald cypress). For information regarding specific characteristics and growth requirements for all trees and shrubs, check out the USDA Forest Service’s Woody Plant Seed Manual, a massive publication available as a free pdf online. 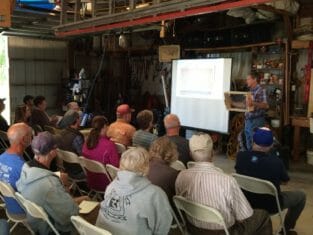 Mike describes the planting flat he uses for seed germination.

After preparing the seeds for germination, the next step involves the planting flat—a wooden frame with hardware cloth for a bottom. Mike puts down one layer of newspaper on the wire mesh bottom then fills the flat with a peat moss and fertilizer mix. He then puts the planting flats out in his greenhouse the first week in March. The flats sit on benches in the greenhouse that again have wire mesh surfaces, with benchwarmers laid out to provide bottom heat for the planting flats. The benchwarmers circulate water through them that’s kept at a consistent 70 degrees. Mike doesn’t bother heating the greenhouse itself, but uses two hot water heaters to keep the bench warmers and the soil mix warm.  He explains that many seeds don’t want to germinate for a few years. For species with a long germination window, he loads up the planting boxes with seeds and selects out the ones that germinated for transplanting, storing the rest for up to five years, checking for germination each season. 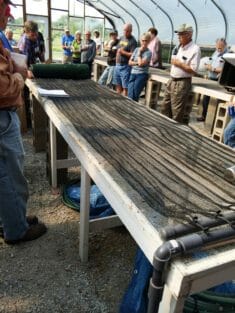 In Mike’s greenhouse, you can see the benchwarming system set up on the mesh table tops. At the top of the photo, you can see his overhead sprinkler system, which he no longer uses because each plant variety has varying water requirements.

The key to this seed starting process is the wire mesh bottoms on the planting boxes and the wire mesh tops of the greenhouse tables. As the seed germinates it sends down a taproot, which pops through the wire into open air, dries out and dies. This air-root-pruning is part of the patented system developed by Carl Whitcomb, and encourages the plant to produce lateral, more fibrous root growth. Mike explained the four inch rule, saying when a root is pruned it will send out lateral root growth on the last four inches of the root. Taproots may be useful for a plant to anchor itself in a location and out-compete other nearby plants, but for a nursery system a taproot is not necessary, nor desirable, for a healthy root system that will be transplanted. 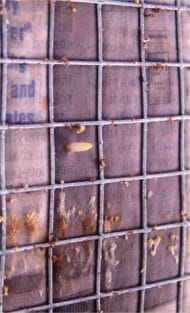 Taken from below the planting flat, this photo shows a taproot from an oak seed being air-pruned.

Once germinated, the seedlings are transplanted into a cellpack designed to continue the air-root-pruning process. The cells have holes in the sides, which the lateral roots eventually penetrate and continue with the four inch rule. At this point, it’s usually been about ten weeks and the seedlings are ready to be transplanted once more and set outside, about mid-May. Again they go into a larger root pruning container that encourages lateral root growth, and are then potted with a peat moss/pine bark/fertilizer mix. He has this mix custom made by Old Castle and trucked in from Chicago, and uses this mix for everything that’s in a pot or an above-ground bag.

As the plant grows it will be transplanted another time into one of two special bags until they are eventually sold. One bag is meant to sit on top of the ground, and has a mesh bottom and fuzzy, velcro-like inside walls. The mesh bottom allows the plant to draw water and nutrients from the ground, while the sidewall material continues the same pruning effect. The other bag is meant for planting below the ground, and has a cloth-like bottom and fine mesh sides that constrict the penetrating roots, allowing it to access water and nutrients but also causing a similar root pruning effect.  Trees that go into above ground bags are expected to be around for up to three years, whereas the ones planted in-ground can be there for about five years.

Needless to say, all trees and shrubs that leave Mike’s nursery are set up for success; he doesn’t offer a warranty on his plants like most nurseries because of their incredible hardiness. Having recently retired as the State Horticulturalist for Iowa, he’s now a full-time nurseryman and has plans to increase his operation a bit over the next couple years. Still, he’s pretty content with his customer base—parks, forestry people, the DNR, and a few retail customers who appreciate natives.

The field day concluded with the opportunity to wander around the nursery and pick Mike’s brain about the most suitable trees and shrubs for specific situations. Most attendees left with the information they needed to begin collecting and propagating their own native trees and shrubs. Others left feeling glad they had the chance to learn from Mike, knowing they won’t be spending any more money at nurseries who use hard-sided pots that cause root spiraling.