Not Your Typical Orchard Managment: Q&A with David Sliwa on Mimicking Nature and Northern Pears

Perry-O and David Sliwa, of Sliwa Meadow Farm, will be hosting a Practical Farmers of Iowa field day on Tuesday, Aug. 11, from 4:30-7:30 p.m. at their farm near Decorah. The focus is a unique one: northern pear cultivars, rootstocks and the Sliwas’ orchard management approach that seeks to mimic forest-edge ecology.

(You can read more about this field day in the news release or via our 2015 Field Day Guide — flip to pg. 28. Note: There’s a potluck at this event. A main dish will be provided, and RSVPs would be appreciated by Aug. 7 to help with meal planning.) 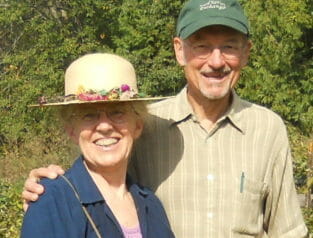 Perry-O and David Sliwa, of Sliwa Meadow Farm near Decorah.

As I was gathering some information to work on press and outreach for this event, I had a nice — and informative! — conversation with David Sliwa about pears, permaculture, orchard management — and the attributes of what David and Perry-O have found to be (after trialing more than 100 varieties since the mid-1990s) their top four pear varieties.

I had no idea just how diverse the pear family was, but my chat with David certainly whetted my appetite to learn more — and to sample a few of his pears!

What do you mean when you say you aim to mimic forest-edge ecology in your orchard management?

In an orchard, we’re not dealing with trees that grow in a woodlot or forest environment; we’re dealing with an edge. It has a unique ecology, with associated plants and soil.

Our orchard management to a large extent is soil-based – so it’s a pretty major part of our emphasis. In our case, our soil biology is fungally dominated – hence the focus at our field day on mycorrhizal fungi.

We’re trying to mimic that edge environment, where there are other types of plants, and the soils are a transition from open meadow soils to forest soils.

That makes sense: You have degrees of light and shade in an orchard, as in a forest edge, that would allow different kinds of plants to grow. But it sounds like a unique approach to orchard management.

What we’re doing is different than conventional orcharding, where there are rows of trees and that’s pretty much all that exists. It’s not unlike guild planting in permaculture. Guilds take the concept I just described even further.

When planting a fruit tree, for instance, you use the area surrounding it in all directions – so there’s no line of trees or alleyways. Rather, the perimeter around the fruit tree has plantings at different levels, starting with ground level, then the zone up to a 2-foot height, then bushes at the 4-foot level, and so on.

So, in a way, we’re mimicking the permaculture idea of guilds – a concept that works with plants that are naturally at certain heights – but we’re not quite at that level.

Explain a bit more about how you try to mimic the forest edge, and the other types of plants you might find there.

We attempt to incorporate plants within the orchard that interact best with fruit trees. That’s where dynamic accumulators, which we’ll discuss at the field day, come in. These are plants that have the ability to take up nutrients in the soil that may not be in a form the tree can readily access.

Comfrey is a good example. It’s really good at picking up nitrogen, calcium, magnesium and other nutrients. When we either cut it and put it in our mulch, or it dies back, it’s in a form readily available for trees.

We looked around our farm to see what was growing and what we have, over time, been dividing and replanting. Other plants are creating diversity on the orchard floor – through the taproot, or opening up the soil.

Comfrey has been growing in our garden for years. Daffodils are another plant we have used; they have a bulb that opens up the soil nicely. Horseradish – again, a deep taprooted plant that provides a lot of space in the soil. We’ve put in currants. They’re more in open areas between trees, and other plants as well.

Will people be able to see some of these other plants in your orchard at the field day?

We have a good demonstration strip. It’s not the whole orchard yet – but that’s the goal.

When we first planted the orchard, back in the mid-1990s, we planned everything on a 20-foot-by-20-foot grid. Imagine a whip of a tree on that grid. There’s a lot of open space that doesn’t get filled in for many years in that orchard.

Since we’re long-term market gardeners, we decided we’d grow some of our vegetables and flowers there. And that’s what we did for several years, until the trees closed in. We included most of our vegetables and our strawberry bed. Now that our orchard is more mature, we’re looking to manage it like that forest edge.

The field day will focus on pear production. Is that the only tree fruit you grow?

We also grow apples, plums and a few others, but our main fruit tree crops are pears, apples and plums, all three of which we harvest and market.

Why did you decide to focus a big part of your orchard on pears?

We chose to concentrate on pears because we like them – but also because there are a lot of people selling apples, and very few people growing pears. This is not necessarily a known area for pear production, but I’m not sure why we don’t grow more pears in the Upper Midwest.

The key to all tree fruits is getting the right combination of variety and rootstock. Apple rootstocks are available in any kind of size category someone could want, from extreme dwarfing to 110 percent of full-size. But pears don’t have quite that availability. So that’s where experimenting came in, to find which varieties of pears would do well on our farm. We’ve also experimented with different pear rootstocks.

It sounds like pears are a really great market opportunity, then.

People are growing pears here, but the traditional varieties in the marketplace – Barletts, Boscs, Anjous, etc. – aren’t grown commercially in this region. Bartlett and Bosc have been out there for 200 years, and are still a favorite for a good reason: They’re great pears.

We wanted to see if those would do well, and what other ones. We trialed 100 varieties of pears over the years. Many culled themselves, we culled many – and we’re still planting. The oldest trees in our orchard are from the mid-90s, but the youngest are from this year.

Wow, over 100 pear varieties! Apples seem to get a lot of press and hype. I didn’t realize there was so much variety in pears.

At the field day, we’ll share a list of everything we’ve trialed – both what has done well, and not well. We’ll also share a short list of what our top four favorites are, either because they meet all the production criteria, or because they’re just really darn good pears.

What pear varieties are on your short list of favorites?

Two are Luscious and Gourmet. They are both from South Dakota, develoed and released from the Brookings, S.D. research station – Luscious in the late 1970s, and Gourmet in the mid-1980s.

So they’re relatively new varieties, but since they came out of South Dakota, they’re hardy in our region: very productive, and very good-tasting. These are multi-purpose pears, but we look to them to be fresh eating. Luscious is similar to a Barlett in terms of the soft, buttery flesh, and sweet.

Gourmet is the opposite. It’s from the same breeding program, but came at a different time and is more like an Asian pear – more roundish in shape, with more dense flesh.

Those are the top two that fit most of the criteria we wanted. We can sell all the fruits we produce of these two varieties. People like them.

Then there are two older pears that are European, which came to the U.S. in the early 1800s – so they’re heritage pears. Winter Nelis is one. Its name indicates it’s a winter pear, meaning it matures late in the season and stores well over winter. They’re rock-hard until then, and mellow in storage.

We wanted a winter pear, and Winter Nelis is a good storage pear that is primarily used for eating, rather than culinary purposes. But you wouldn’t pick it off the tree and consume as a fresh-eating variety. It needs to be stored, and it mellows and gets that really fine quality after a month or so.

The second heritage is a French pear – Giffard – which is a summer pear. Its full name is Giffard Beurre, which means butter. So you get the idea that it’s a buttery, melting flesh. It’s small in size, but a very fine quality. That pear is not the easiest for us to grow, but I still list it as a favorite because of its fruit quality, and the early, early season.

You describe these pears so wonderfully. I really wish I could sample them!

There are some northern varieties that we grow for summer pears – like Summer Crisp, which is a Minnesota variety. It’s very hardy and quite productive, but the pear quality is not that great in our estimation.

The summer pears, like summer apples, are short-season: They don’t keep, but come at a good time.

Pears do not store well like apples do, so we don’t really look to store pears very long. In fact, it was Ralph Waldo Emerson who said there’s 10 minutes in the life of a pear when it’s ideal to consume, and he was right!