The father and son team at Bridgewater Farm, Dale and Tyler Raasch, get more done on their farm than seems possible (to mere mortals). The duo manages 23 acres of organic fruits and vegetables, plus meat chickens, layers, pigs, and beef cattle. As Dale and Tyler toured the group around their farm, CSA members, friends and family worked in the kitchen amping up an amazing potluck with farm-fresh dishes.

Dale has been farming since 1978, but added fruits and vegetables in 2007. In 2011 he added a single high tunnel. Since then, the outdoor production of fruits and vegetables has multiplied. Though they continue to learn as they go, their experiences were a wealth of information for all who attended. 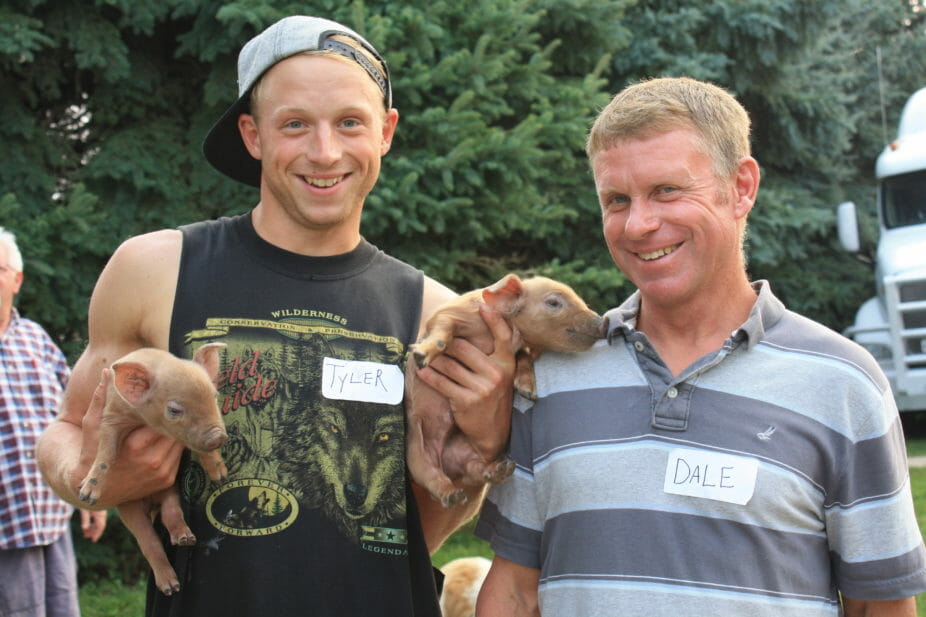 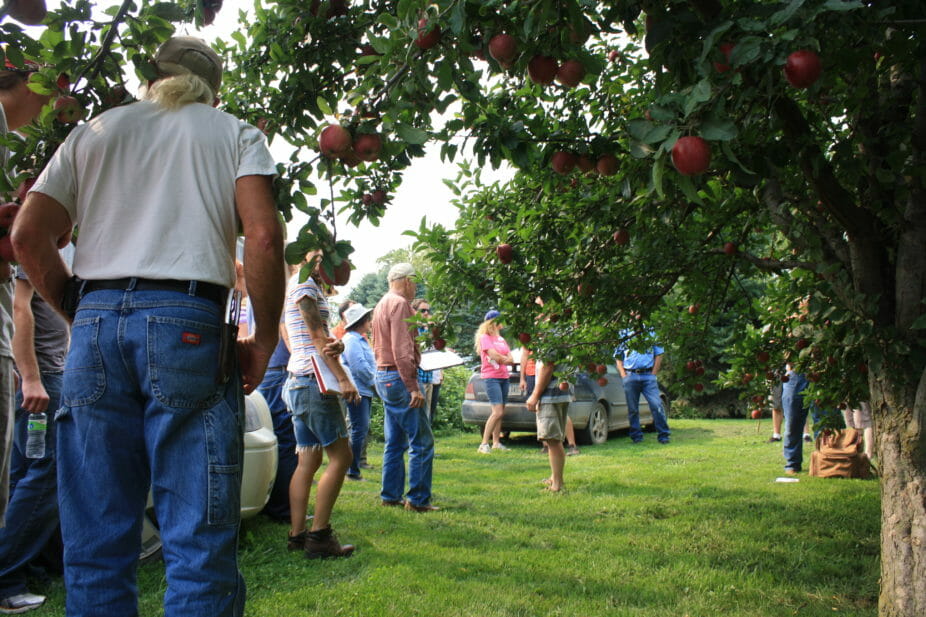 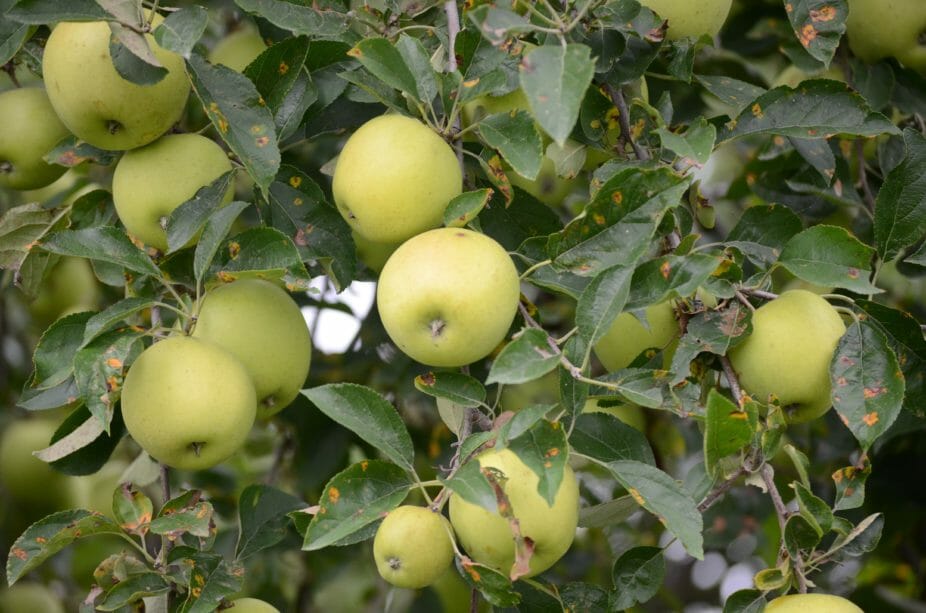 “As soon as it starts to warm up at the end of March, hang jugs with the following mixture in each tree: 1 cup apple cider vinegar, banana peal, and 3 cups of water. Replenish as needed. Using this we’ve never had worms in our apples. Leave the milk jugs up until the blossoms fall off… and you’ve got perfect apples.” 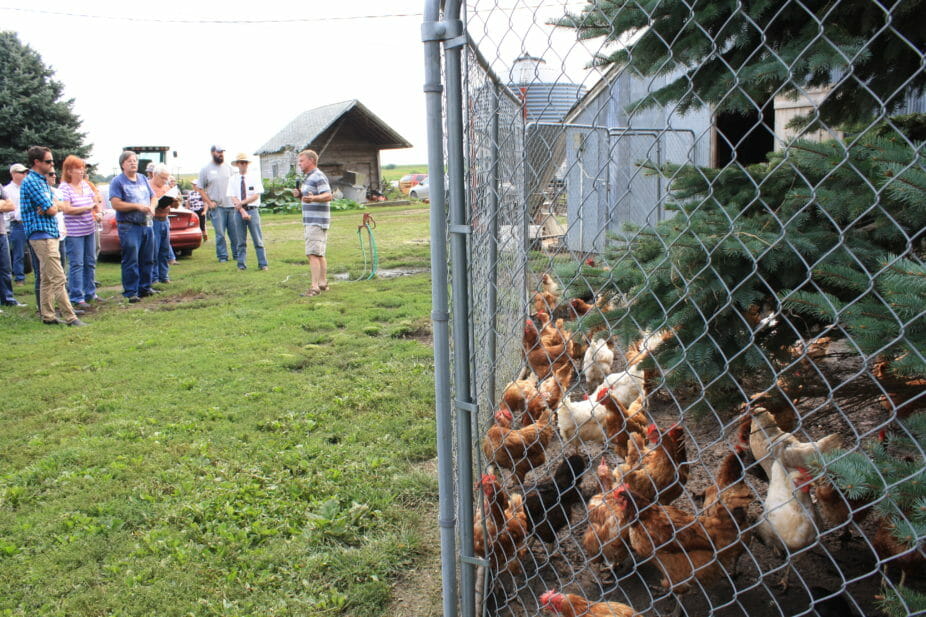 Bridgewater Farm has 600 laying hens in two broods. Most of the hens are 3-4 years old. On a regular day (without a field day), Dale opens the gates and the chickens can roam the farm. 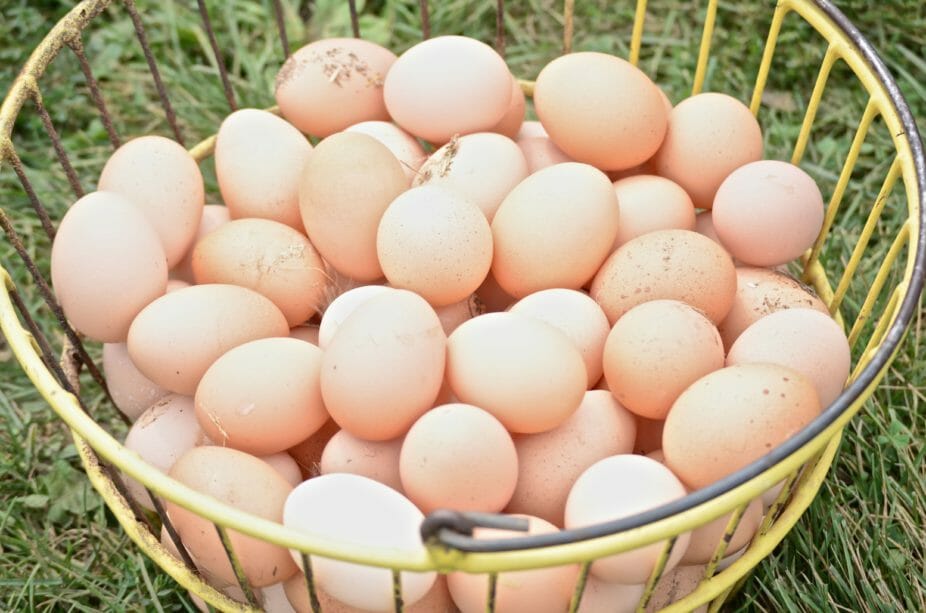 Bridgewater Farm sells eggs for $4/dozen. Even with increased demand, they chose not to raise their prices. 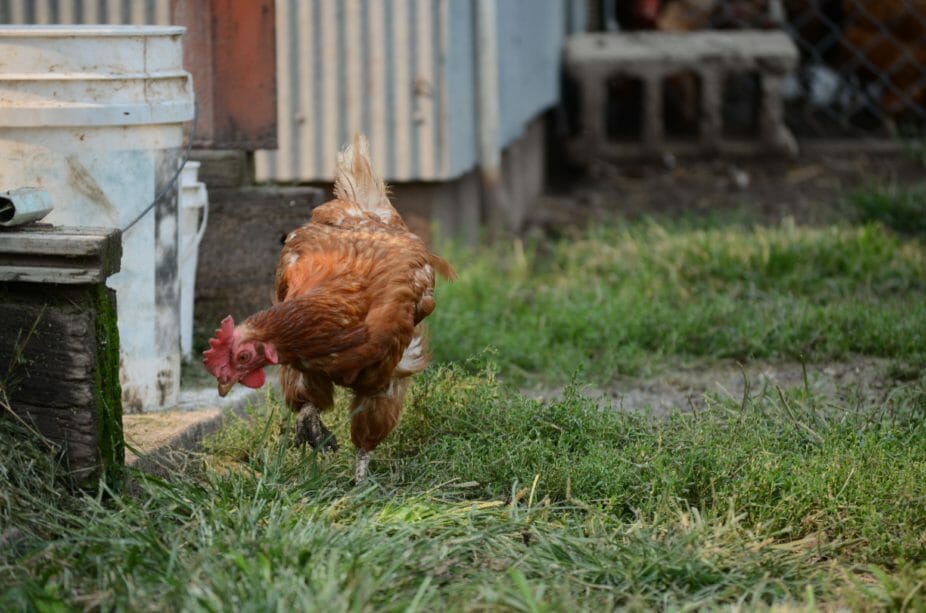 “We feed all organic corn and soybean meal. We leave our broilers on 25% protein all the way through, and get some up to 8-10 pounds. By keeping the protein up, we don’t have the leg problems of other birds. By Christmas we’ll have 1,500 birds ready.” 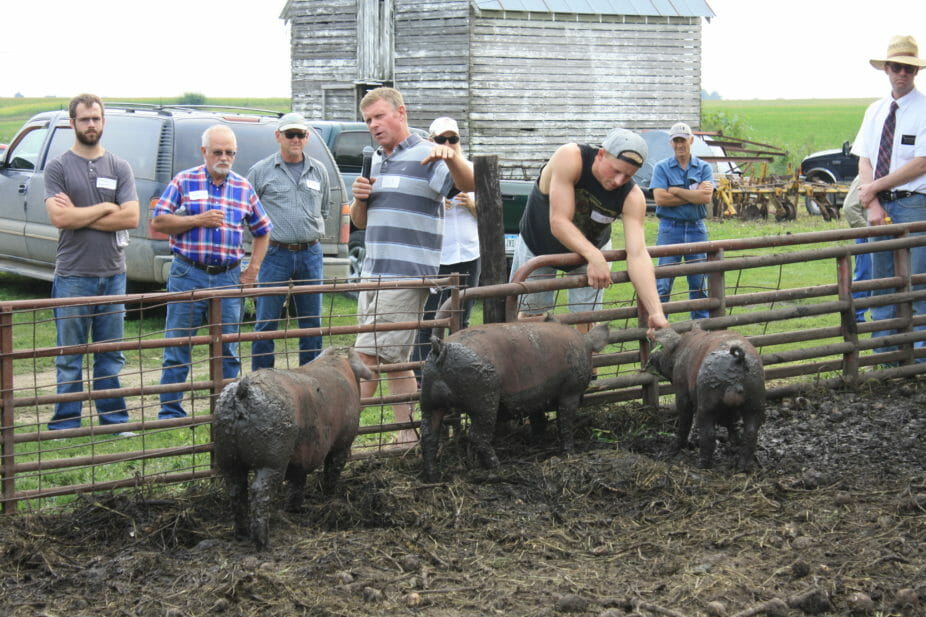 Tyler and Dale raise beef cattle (Angus-Gelbvieh cross) and organic red wattle pigs. They sell wholes and halves, but also sell cuts at the farmers market. “Our beef is not certified organic because of the required buffer from conventional cropland. Our pasture is surrounded neighbors’ conventional crops, and we’d have to put an additional fence 30 feet inside our perimeter to make that work.So we do not have them certified organic, but we follow the organic management with them as we do for the hogs, chickens, and eggs.” 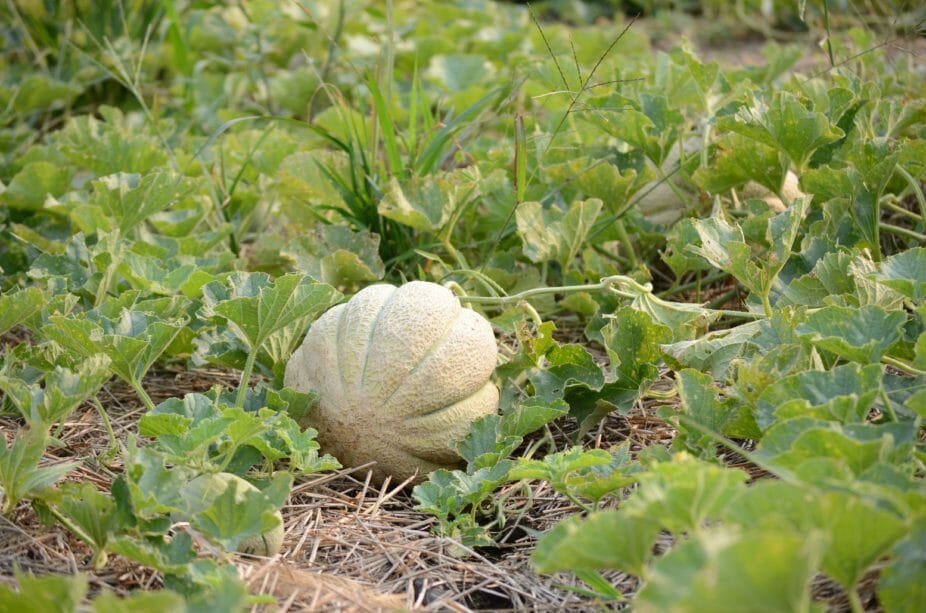 “We sell to Campbell’s Nutrition, Gateway Market, Hy-Vee, Fareway, and are just getting started with Whole Foods. We’ve been working on getting into stores for years and it wasn’t easy. Two years ago one store was going to buy 500 lbs of tomatoes, we got two weeks away and they said they weren’t going to need those tomatoes; they’d found a better price. You’ve really got to find someone you can trust when you sell to stores.” 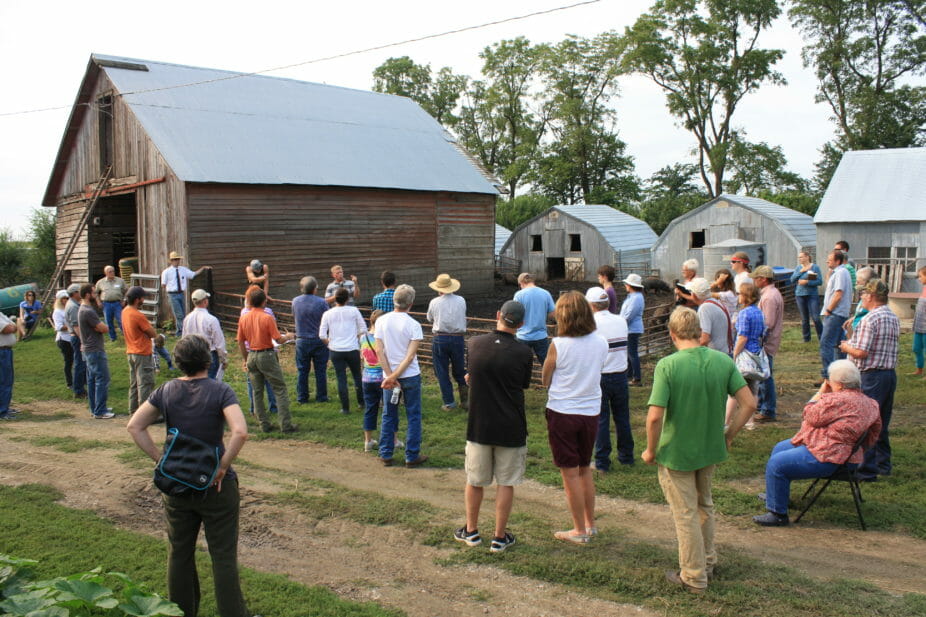 “It’s worth it to be certified organic. Without the certification, you can’t command a premium with stores. Saying you ‘grow organic’ doesn’t count.” 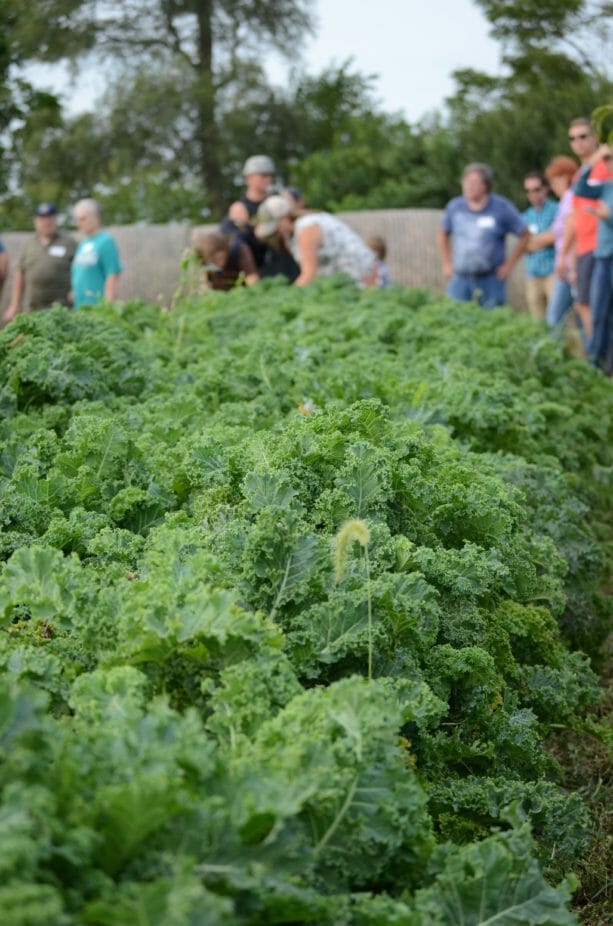 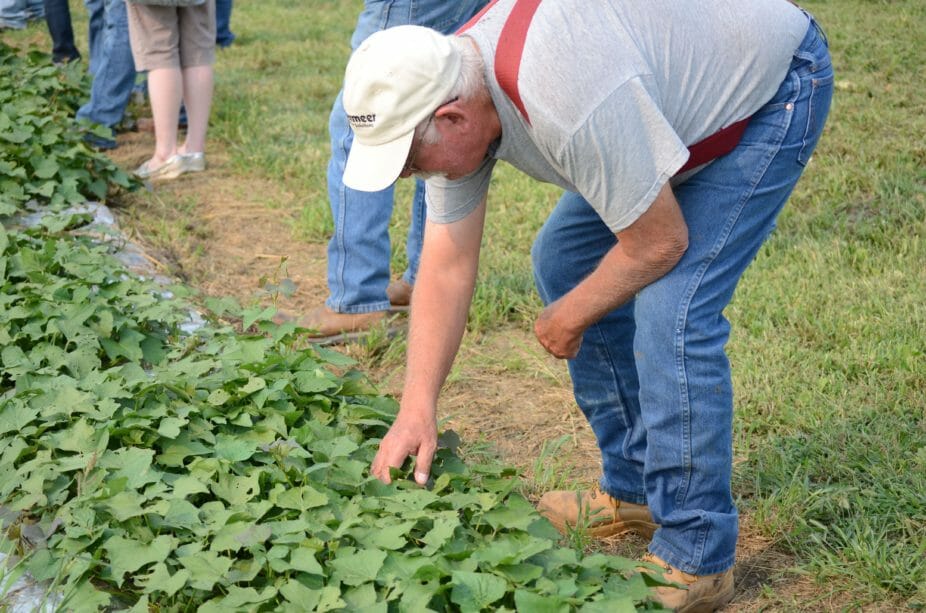 “We get our sweet potato slips shipped from North Carolina. After laying the plastic, we just cut a hole and drop in the slip. We have about 8,000 sweet potato plants out here -Beauregard and Covington. We expect a yield of around 64,000 pounds, and we dig them by hand. You’ve got to handle them carefully and not scrape them up, or you’ll have problems with storage.” 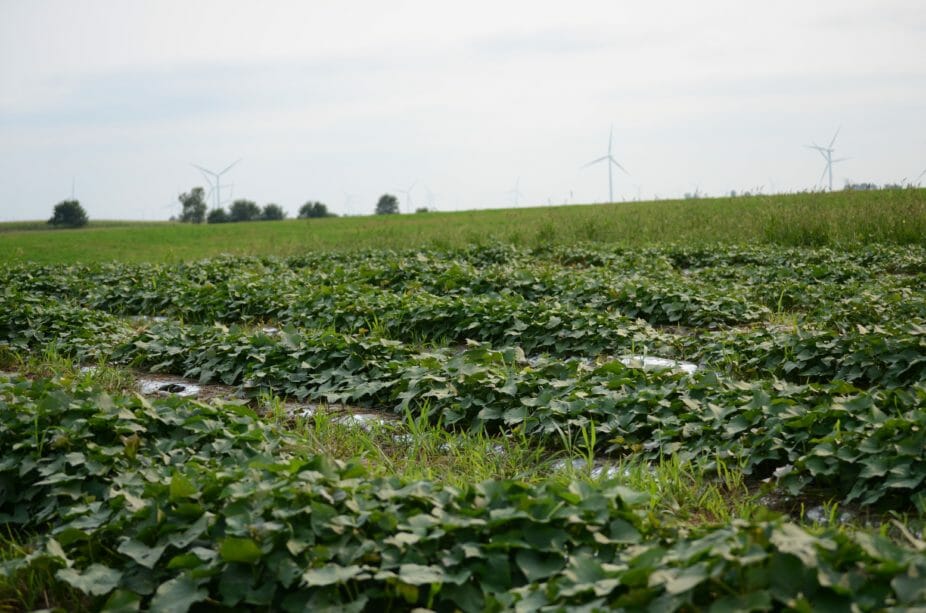 “Next year we hope to do a better job of cultivating between the rows. We let the weeds get away in the melons this year; we did a little better in the sweet potatoes. The biodegradable mulch we got from California came really late this year – we didn’t get it in until the end of May, which really set us back. Next year we hope to have it in much earlier.” 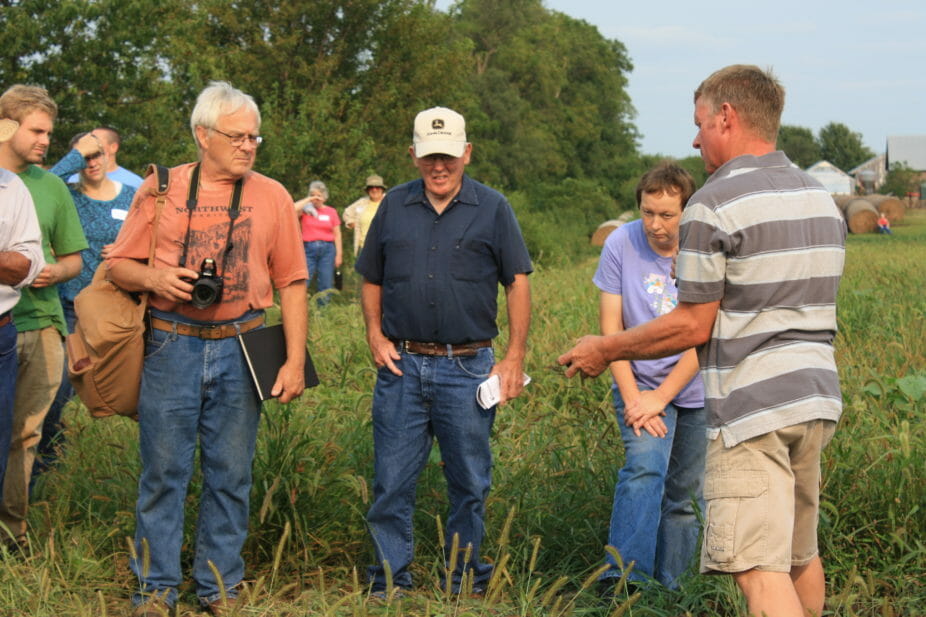 Dale Raasch talks to field day attendees about Bridgewater’s potatoes. Bridgewater Farm has about 50 hours per week of extra labor (in addition to Dale and Tyler) – with a laugh they say they could use a few more hours of help. 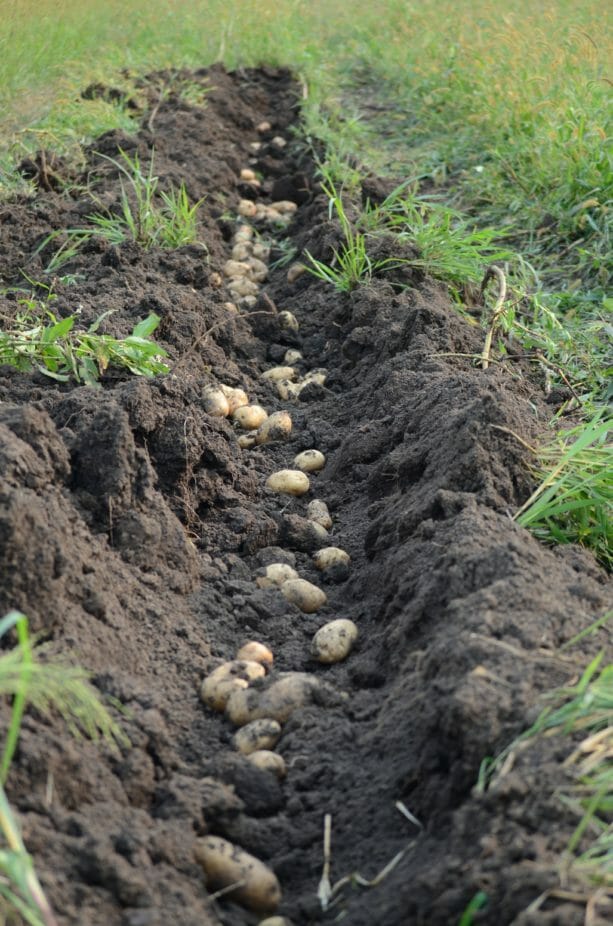 “Our potatoes are planted in 350′ rows, and we get about 250 lbs out of each row. We have about five acres of potatoes and expect a total of 30,000 lbs. We cultivated three times in potatoes; the plants died off a little early from blight, so we mowed it down – three weeks later the weeds are coming back again.” 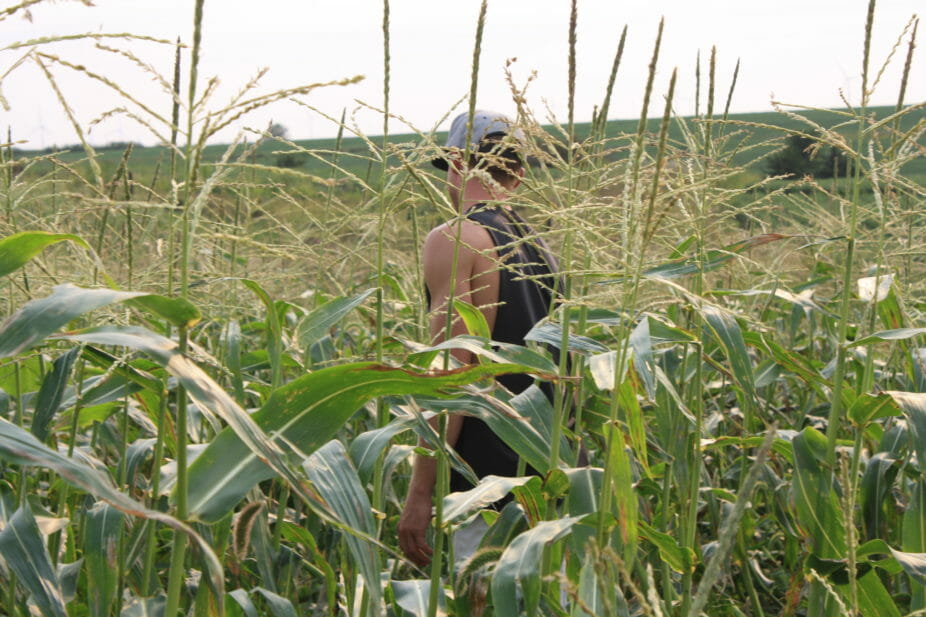 “We took a cutting of hay off here, let it grow up a foot, then tilled it in and planted the sweet corn the first week of July. It got flattened a couple times in a wind storm but we think it will be alright. We’re expecting about 40,000 ears. The trick to organic sweet corn is – you cannot plant it early. You will not have the first sweet corn.” 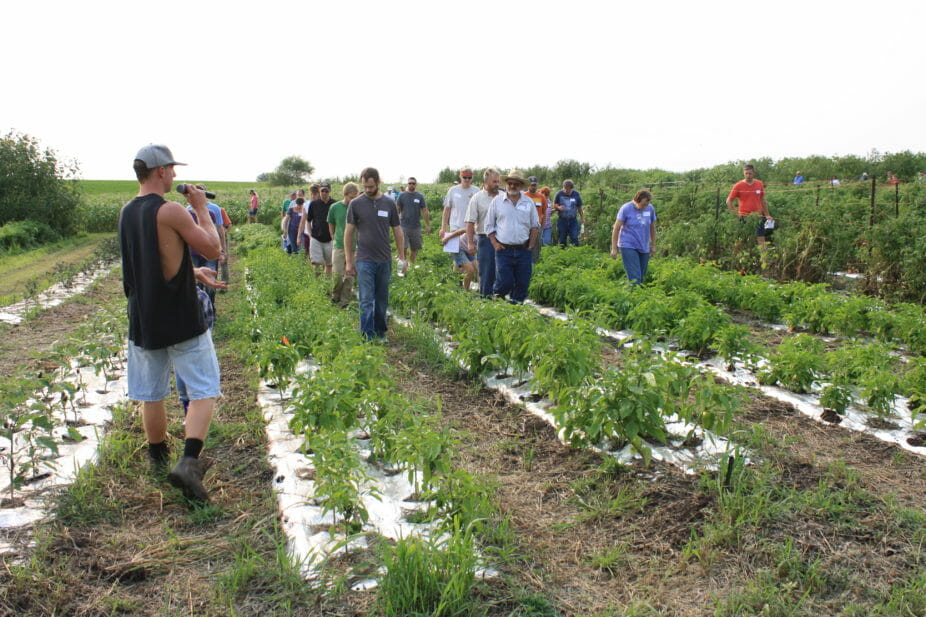 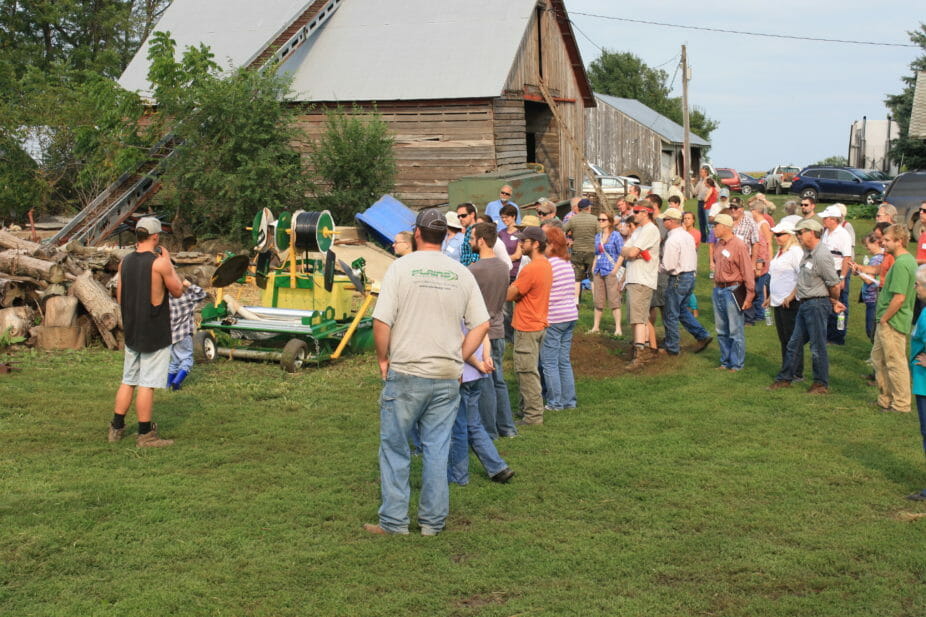 For Bridgewater, a plastic mulch layer is a lifesaver for growing sweet potatoes. They bought this one used; a new one runs around $4,500. 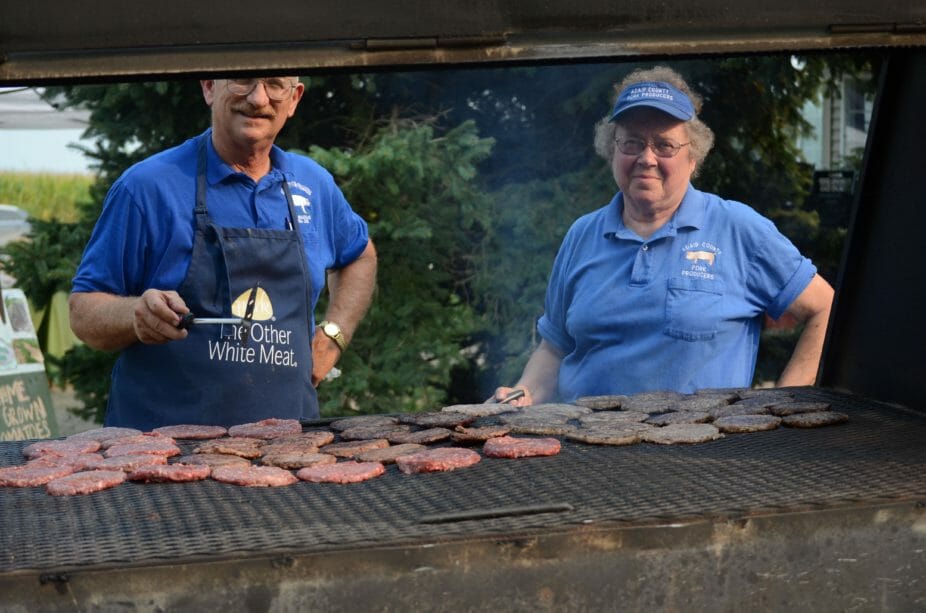 Thanks to Gateway Market and Iowa Farmers Union for their sponsorship of this field day.