“There are only ten minutes in the life of a pear when they are perfect to eat.”
– Ralph Waldo Emerson

Nearly 100 people gathered at Perry-O and David Sliwa’s farm outside Decorah to learn about managing the soil in an orchard and the extensive varieties the Sliwa’s have tried over the years. The Sliwa’s adventure began as a homestead orchard, and as they expanded their market garden, they expanded their fruit trees, too. A lot of people had apples, so they decided to focus on pears. The started experimenting, and they continue to experiment.

Mimicking the ecology of the forest edge, their orchard is a polyculture with cultivars from around the region, and from friends (some of the cultivar names you won’t find other places). Their personal favorites include: Luscious (Sept.), Gourmet (Sept.), Winter Nelis (Oct. Nov.), Beurre Giffard (Aug.), Chapin (Aug.), Collette (Sept.), and maybe Ubileen (July).

Scroll through the photos below to see more about the Sliwa Meadow Farm, the pears, and the potluck! 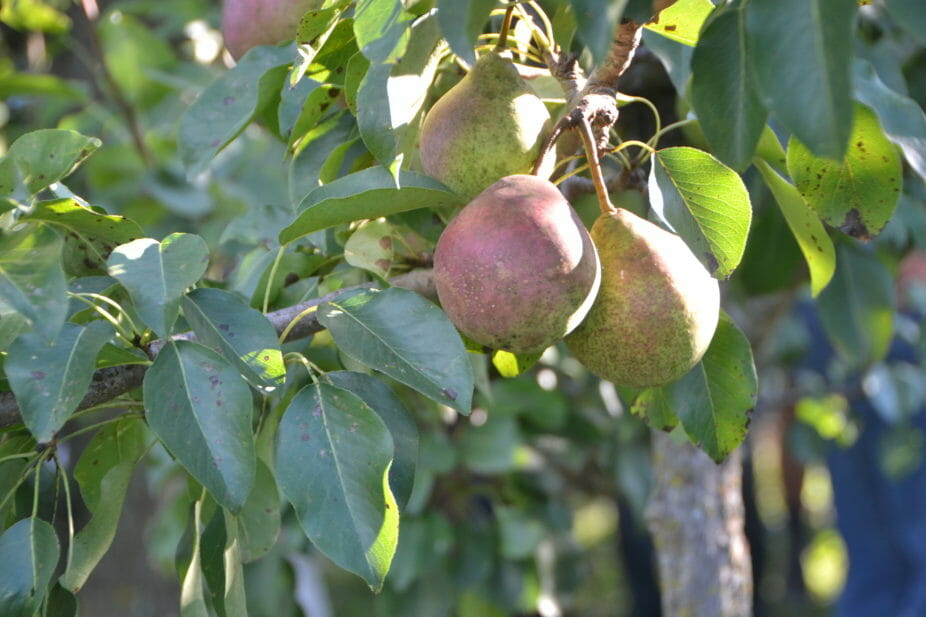 Summercrisp pears, an early variety, were ready for picking but not quite ready for eating (we ate them anyway). Attendees also sampled or took home a Staceyville pear. 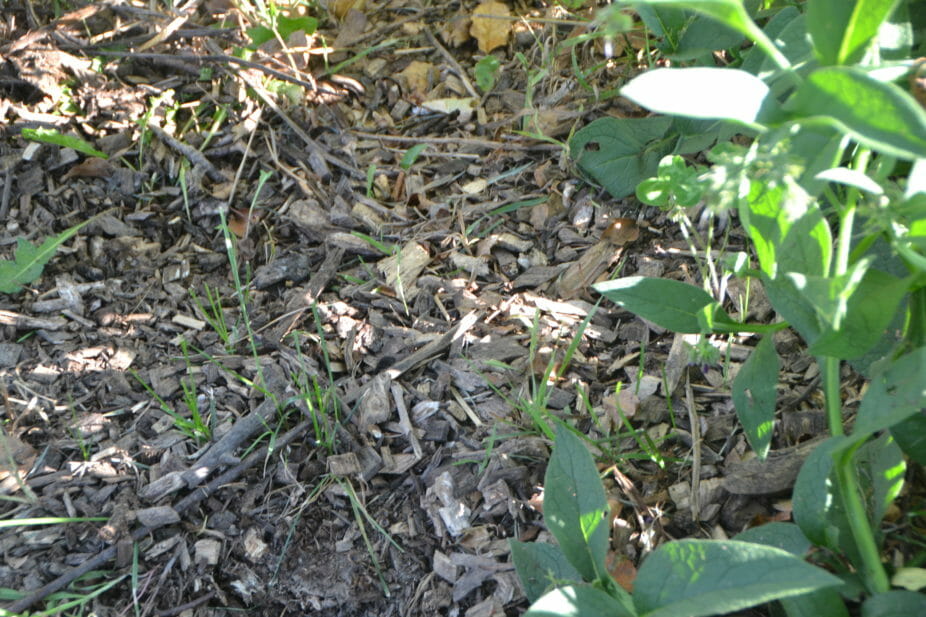 David gets his woodchips from the yard waste disposal site (another reason they’re not certified organic). David scours the local yard waste disposal site for fresh hardwood chips. They bring them by the truckload to increase the carbon:nitrogen ratio (ideally 40:1 to 50:1). Sometimes it’s a good day, and sometimes it’s not. According to Perry-O, a good day is when he finds a freshly-chipped, good hardwood with lots of green leaves. He goes and picks through the huge pile for the best stuff. Evergreens and cedar are challenging for fungi and will affect the pH of the soil. David has decided that a little bit of black walnut mixed in with a lot of others is ok. 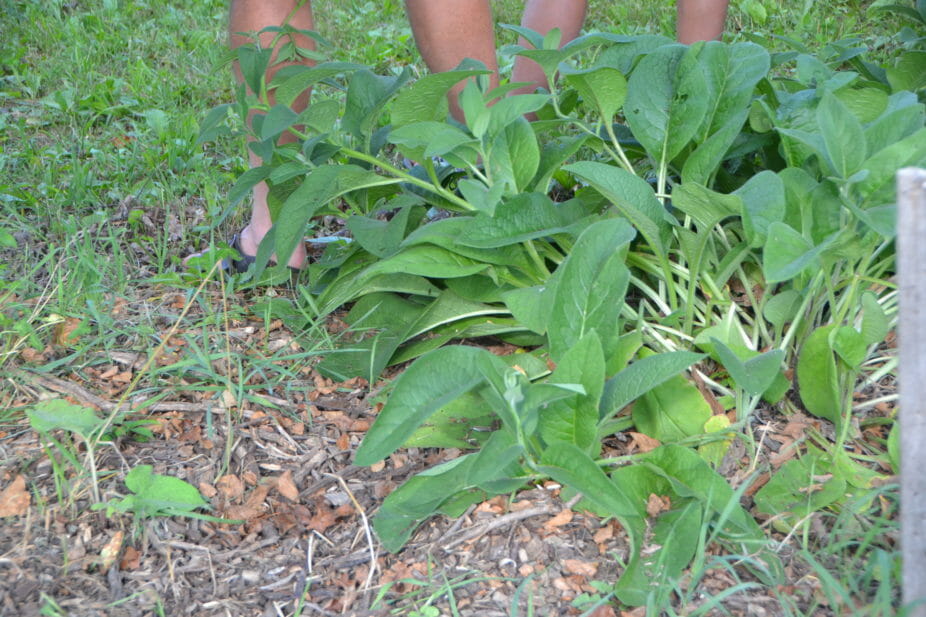 Comfrey and horseradish are used in the orchard as dynamic accumulators. These two plants were used primarily because they were easy to split and propagate from other areas on the farm. Comfrey is a super-plant as a dynamic accumulator, is deep-rooted and grows quickly. Daffodils also surround each of the trees, as the Sliwas were yearly dividing daffodils. David has since learned that daffodils are “the” orchard flower in England – they’ve been planted there for centuries. The orchard trees on are on 20 ft x 20 ft grid. Between trees, there are dynamic accumulators and a black currant bush on the center. The black currants, also, came from sprouts from around the farm. 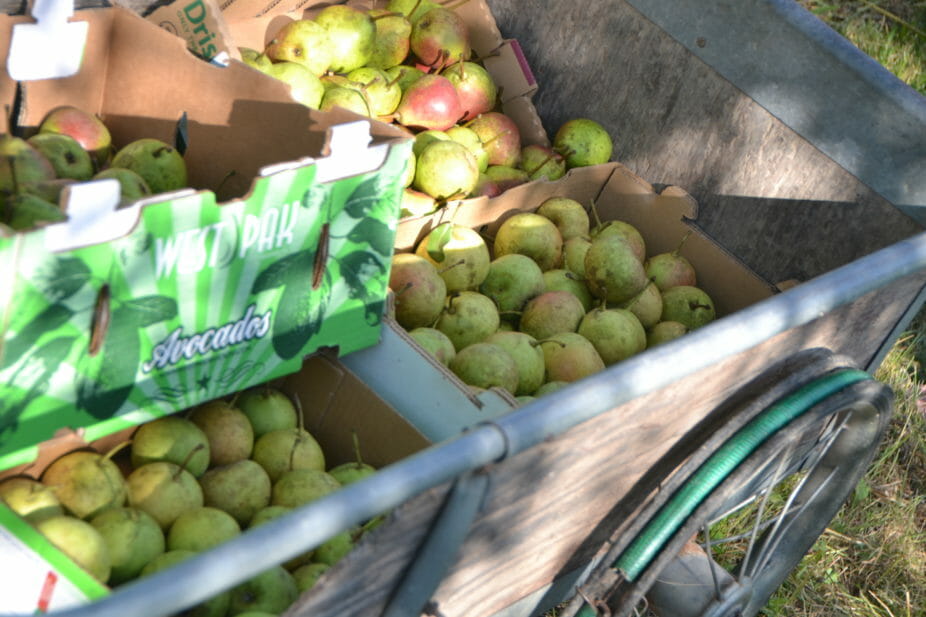 “Pears absolutely do not ripen on the tree. Pears need to be picked when they are mature, and eaten when they are ripe. When we’re growing relatively obscure varieties of pears, there’s no source to tell you when they’re mature.” 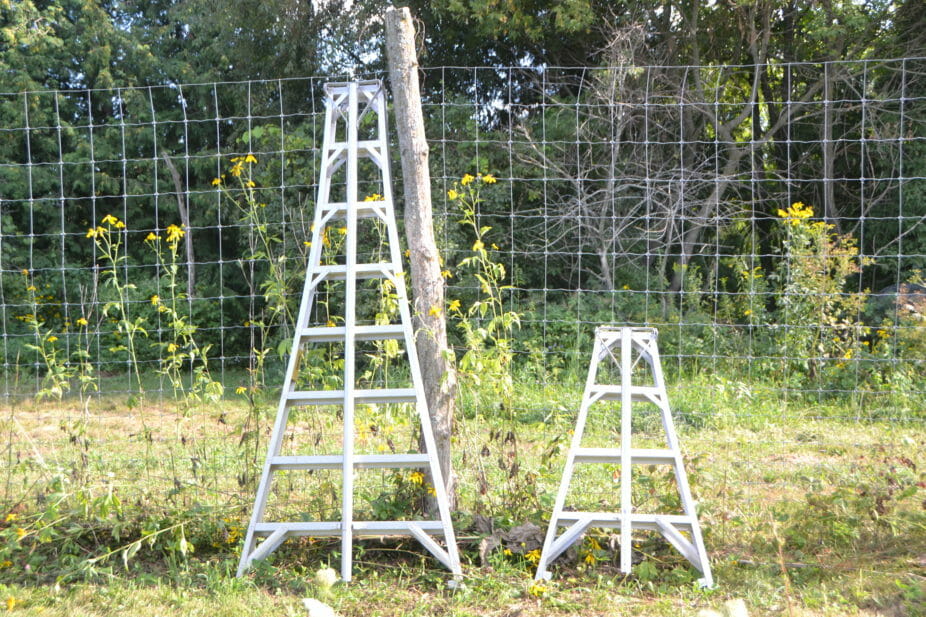 “When we prune in the orchard, we chip everything. In the early years, we gathered the prunings and burned them. We were told we needed to get rid of the insects and pests on the branches, but we’ve found chipping them up on the surface doesn’t matter. We use a small John Deere 750 and a DR machine that runs on the PTO. Of course if there’s a disease issue we remove those branches and deal with them differently.” 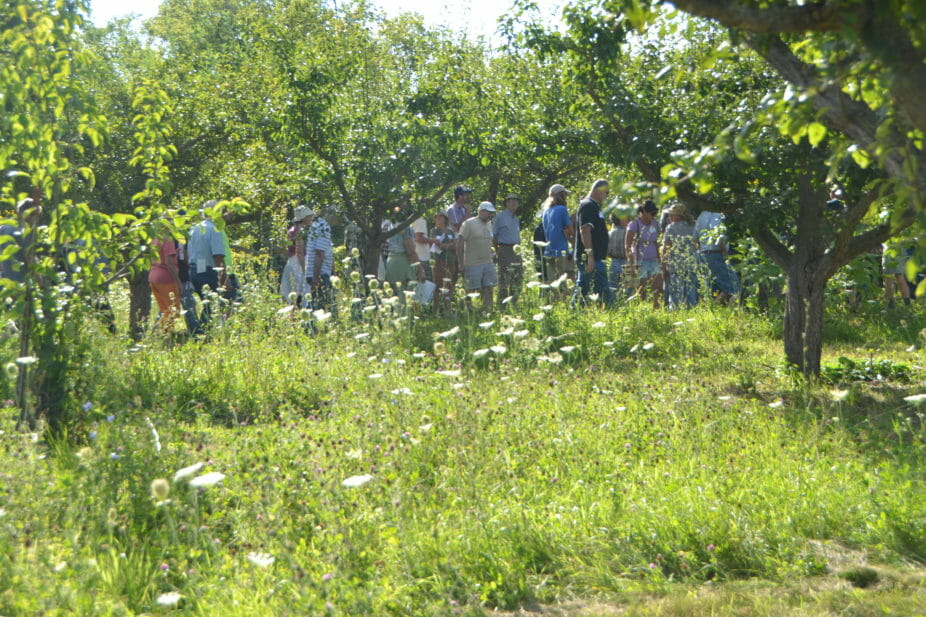 Field day attendees work their way through the orchard of pears, apples, plums, and peaches. 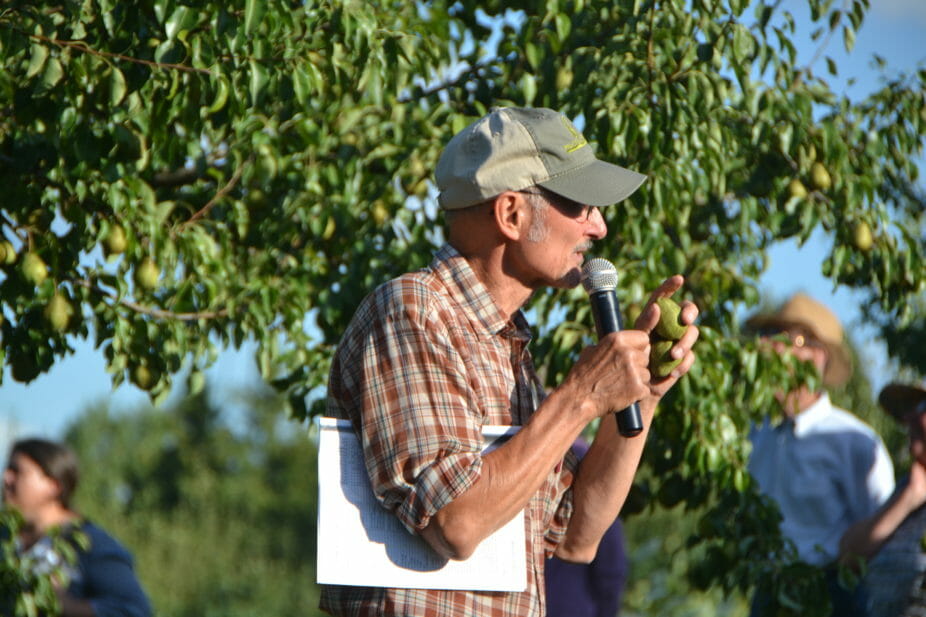 David Sliwa tells attendees about one of his favorite cultivars, Luscious. 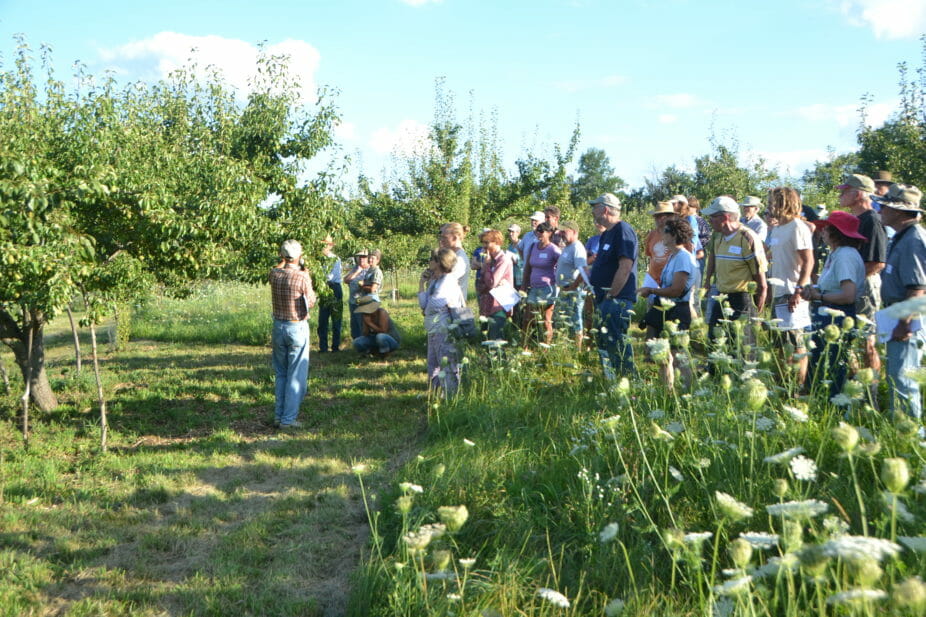 “Luscious is our favorite. Soft, buttery, melty, sweet and juicy. The standard for pears worldwide is the Bartlett – it has all of those qualities. But if you get a Bartlett at the supermarket you might not recognize it. It’s hard to get that kind of pear in a store, you almost need to grow it yourself.” 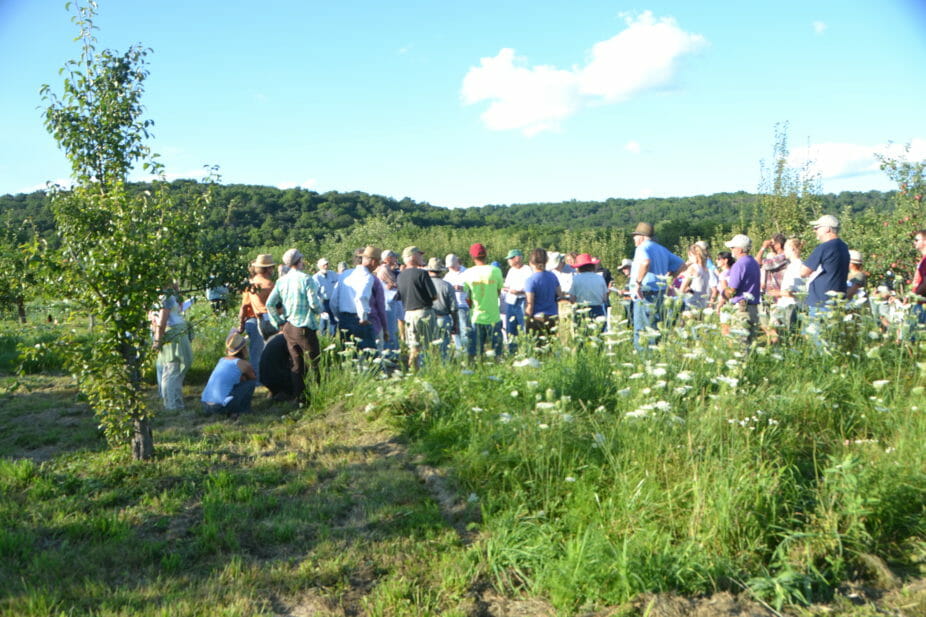 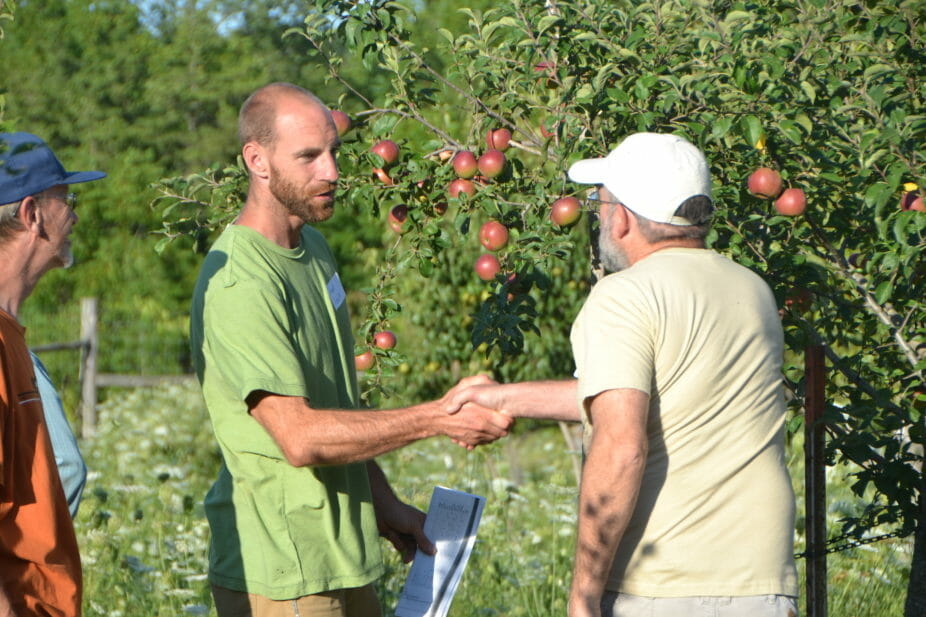 Grant Schultz and Jack Knight greet each other by an apple tree. 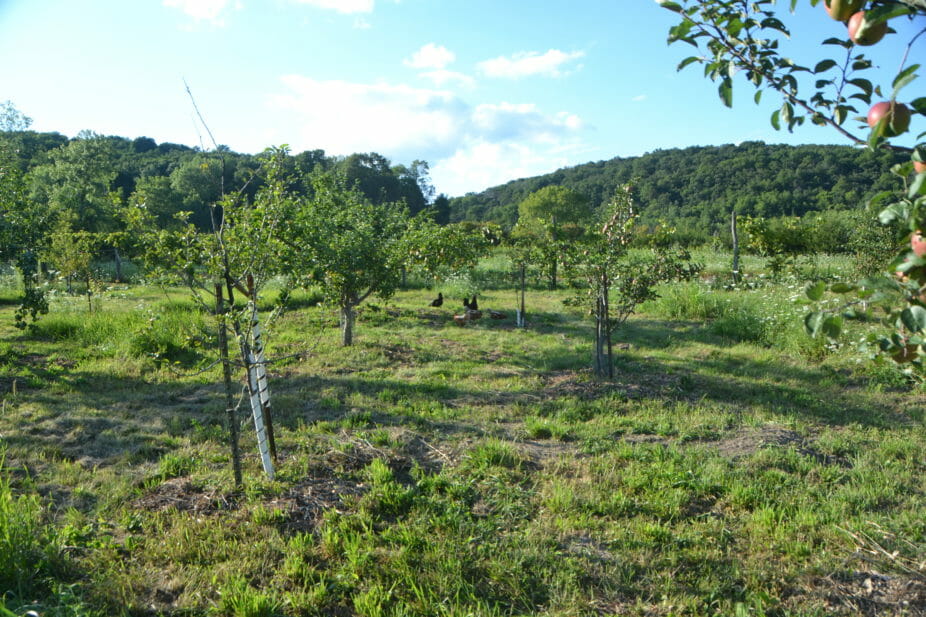 “If we think we can farm without animals somewhere in our system, I think we’re mistaken. But the key is balance.” – Jackie Hoch, Hoch’s Orchard (David just keeps a few chickens in his orchard) 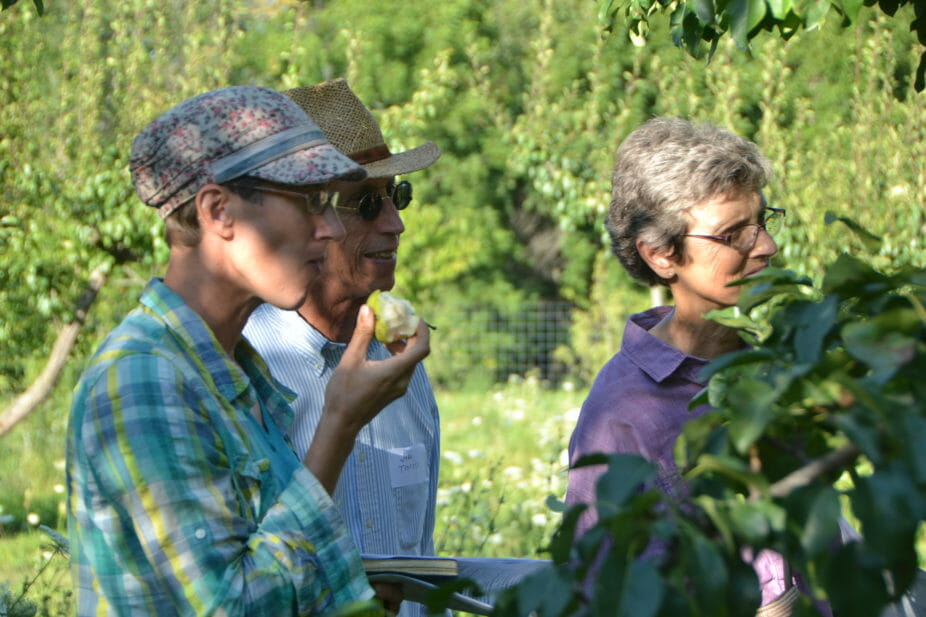 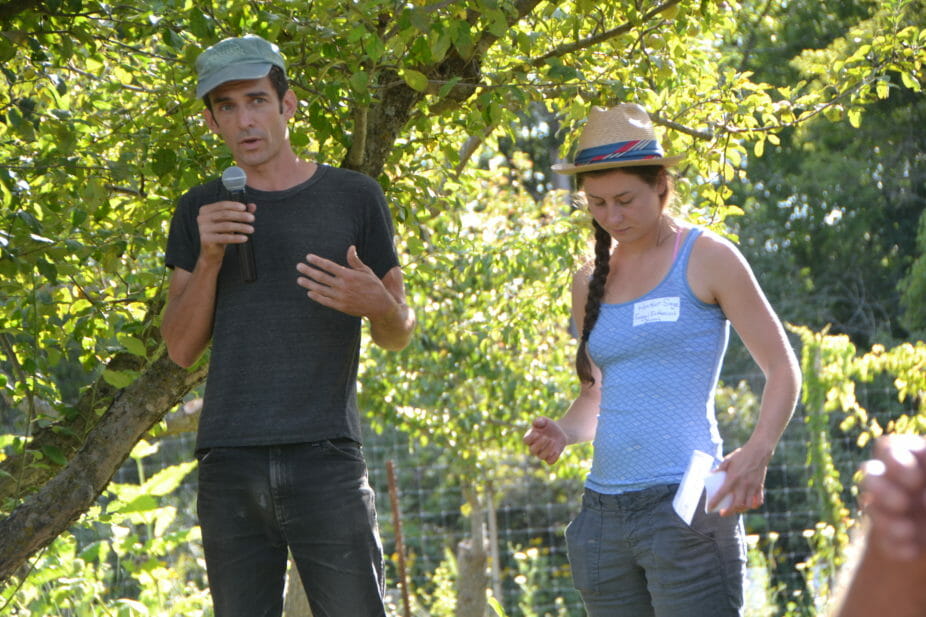 Conor Murphy and Heather Sage discussed the role of fungi in the orchard, including inoculating with mycorrhizae, and using duff collected from local woods. The duff (which David regularly digs up from under trees in the woods) has mycelium and spores that could be symbiotic with the pear trees. 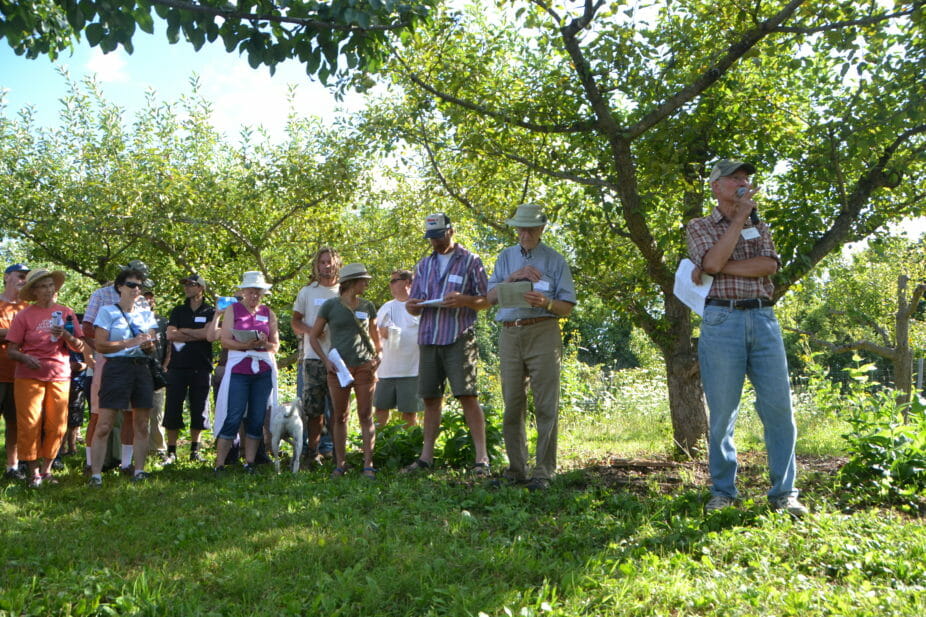 David Sliwa addresses the crowd under a fruiting group of Summercrisp pears. 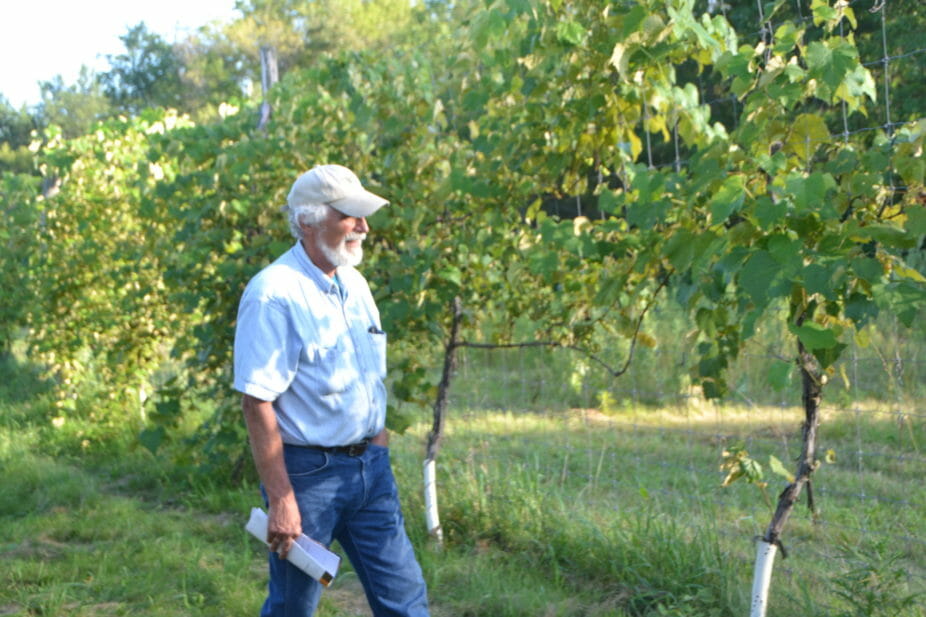 A field day attendee walks along the grapevine-covered fence of the orchard. 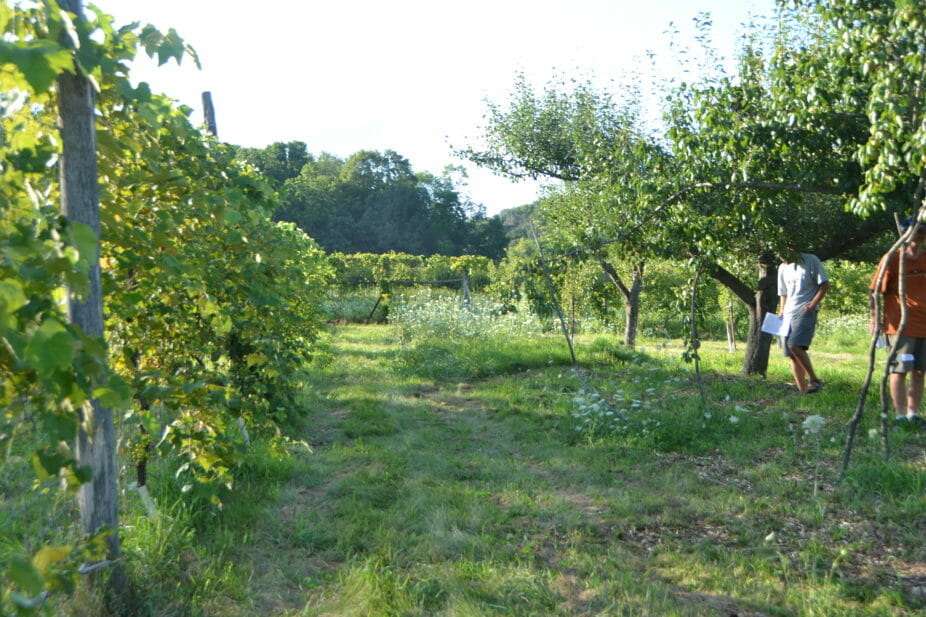 Grape vines scale the exterior fences of the Sliwa’s orchard. 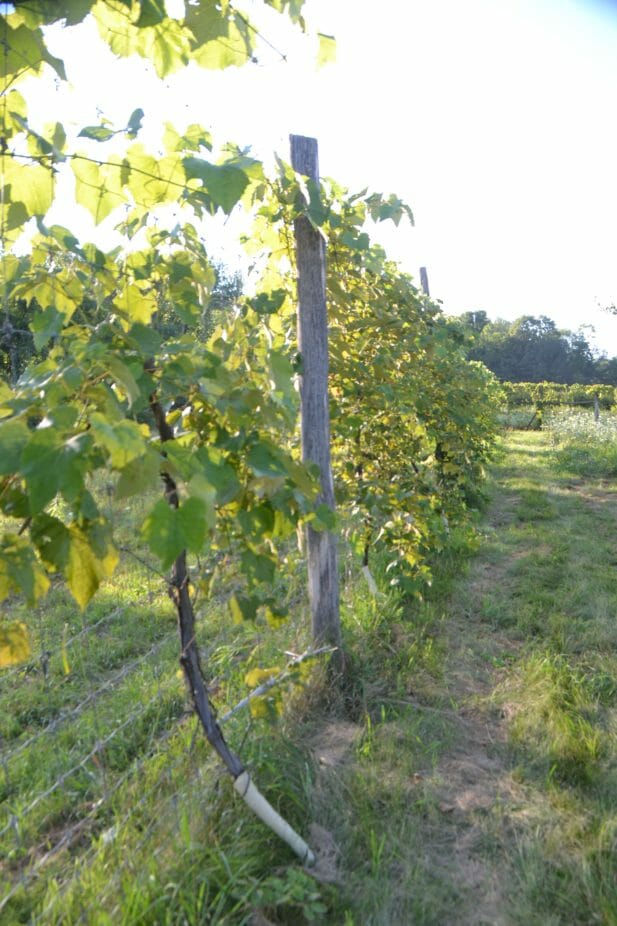 The exterior deer fence of the orchard. 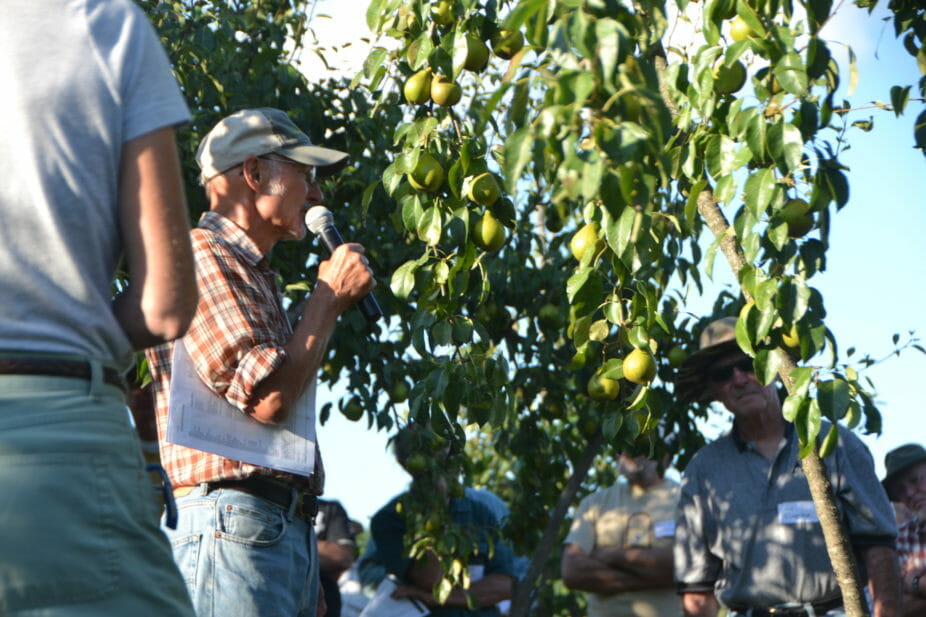 David tells attendees about one of his favorite pear cultivars, Gourmet. 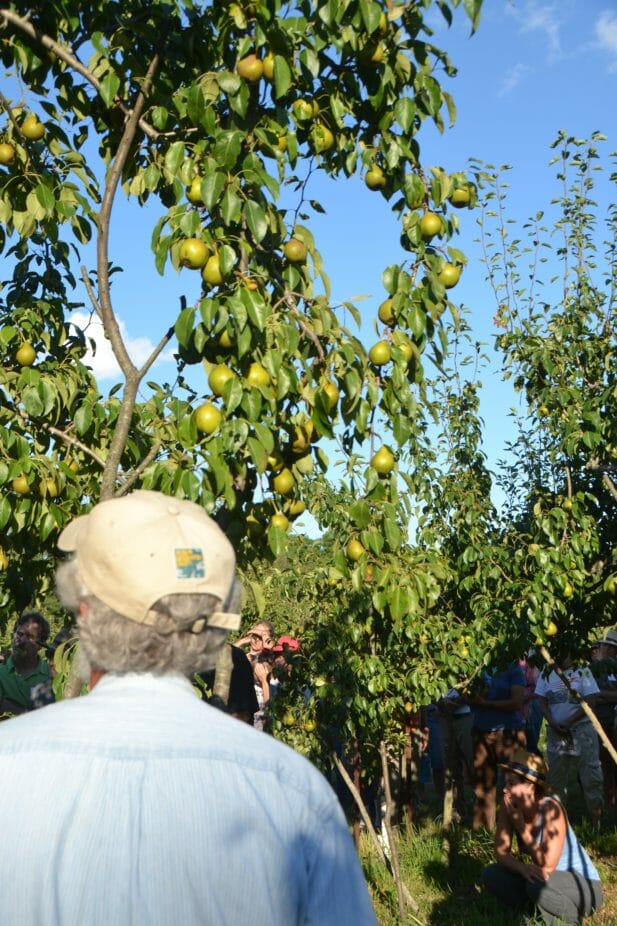 The fruit set on this Gourmet was pruned back 50%, but still has a plentiful crop. 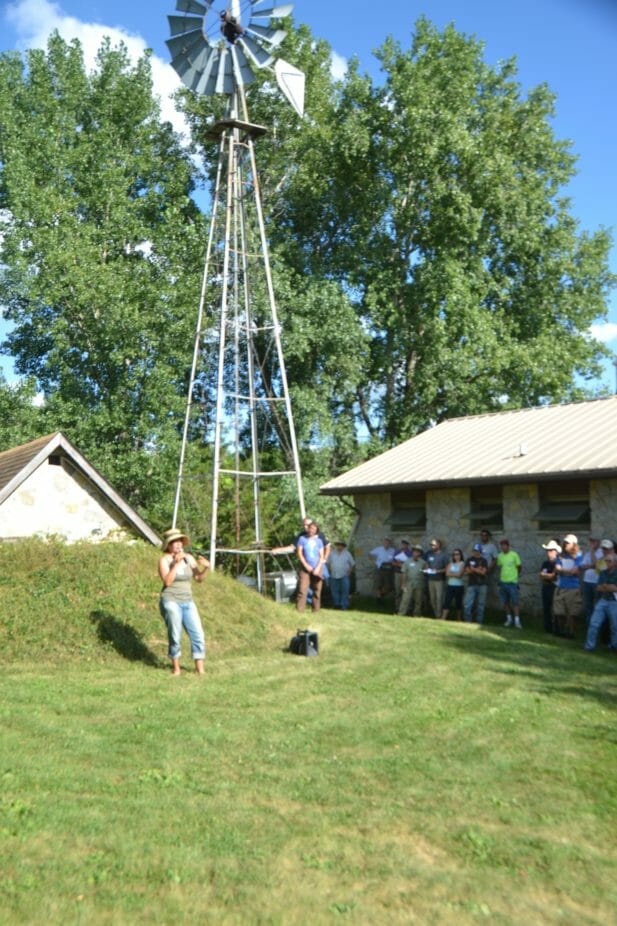 Hannah Breckbill welcomes the crowd. The Sliwa’s host Hannah’s vegetable CSA farm, Humble Hands, on their property. In the background are the root cellar, turbine, and the back of the Sliwa’s off-the-grid house. 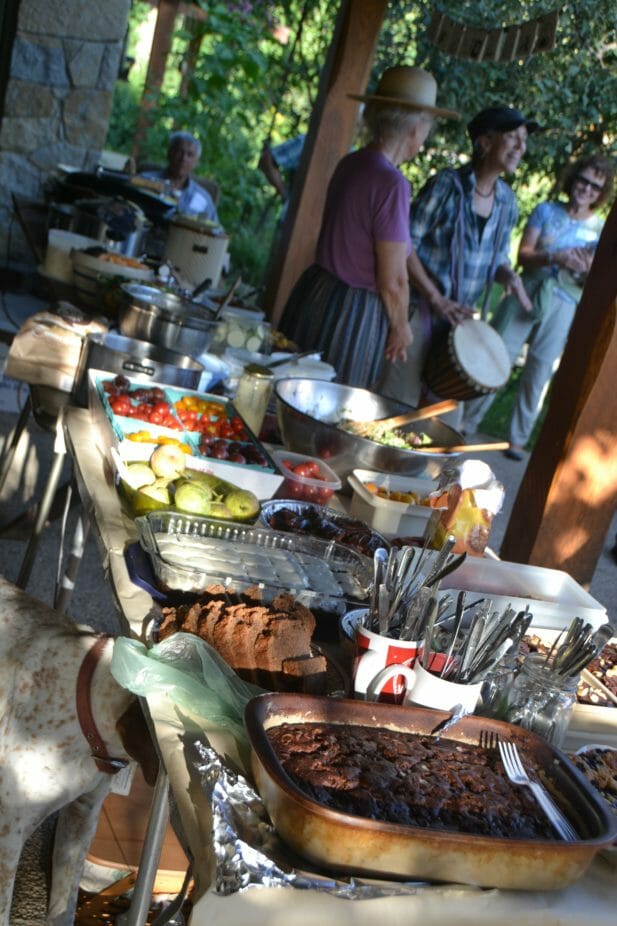 Perry-O and Liz Rog lead a group sing before the potluck. 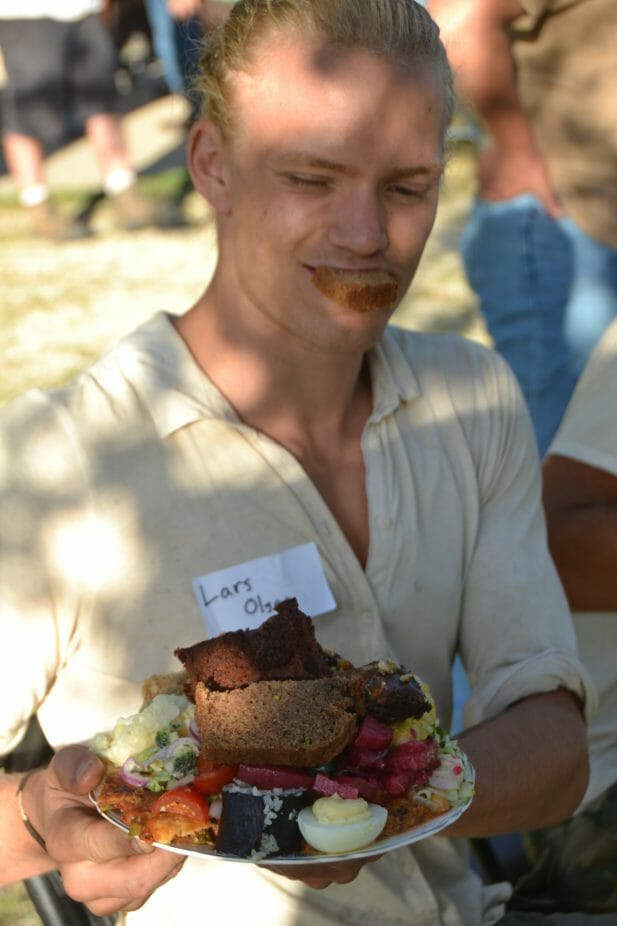 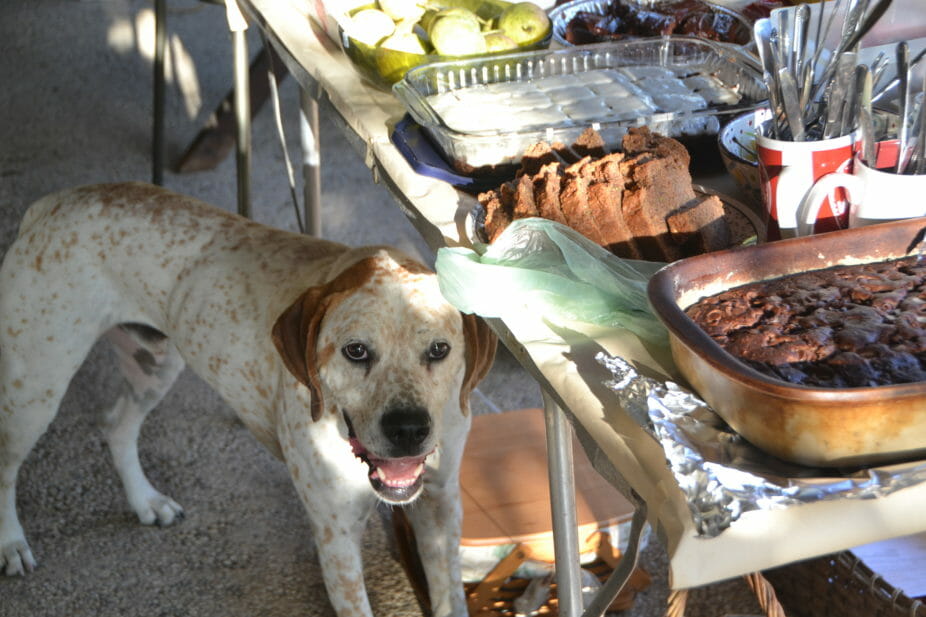 Buddy waits for the potluck to start. 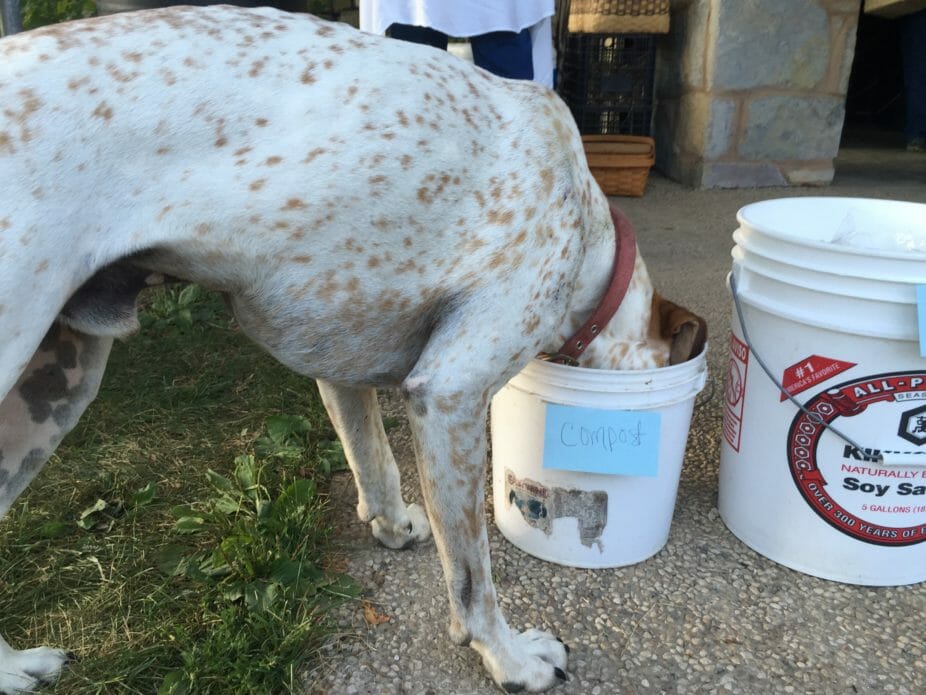 Buddy enjoys his role at the potluck. 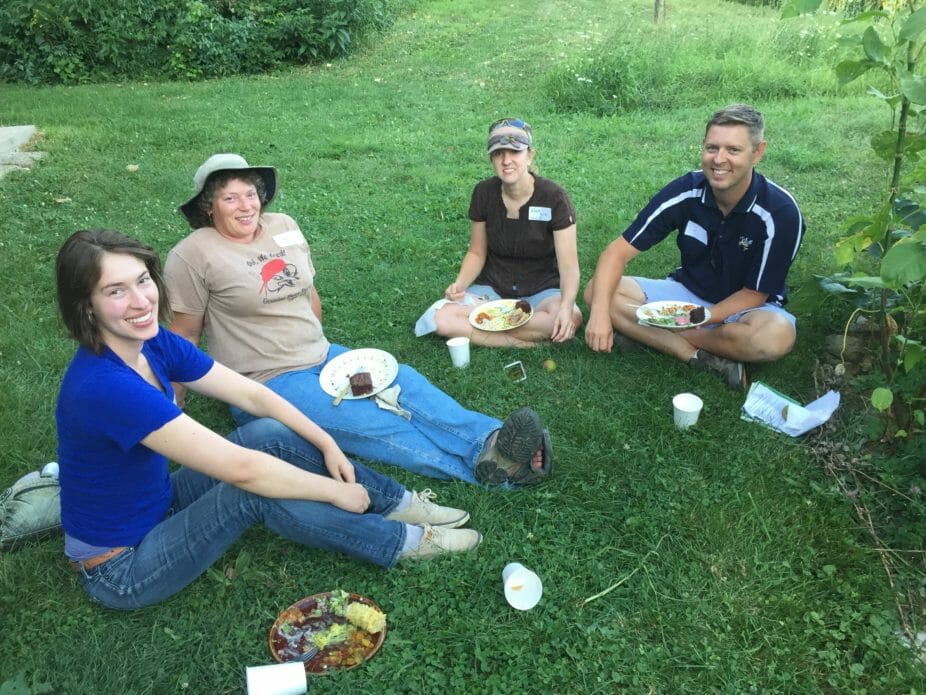