Dave Schmidt, who runs Troublesome Creek Cattle Co. with his wife Meg near Exira in Audubon County, shared with me over email a small project they were trying on their farm involving rolling a cereal rye cover crop ahead of a summer grazing mix. I asked Dave to write a couple guest pieces for our blog about their experience. In this second installment, he shares how the summer grazing mix turned out and how well their cattle performed grazing the mix this summer. You can find the first installment in a blog post dated June 16, 2015. Dave will also participate in a panel session at our upcoming annual conference on Saturday, Jan. 23, 2016 to further discuss rolling cover crops. Be sure not to miss it!

About one week ago Meg and I pulled the cattle off the last of the warm season annuals and brought them in for weighing before they transitioned back to cool season perennials.  That meant we finally had the last component needed to evaluate the success or failure of our rolled rye experiment.

I am happy to say the volunteer rye was not an issue. The few sprouts that popped up from the base of the rolled mature stems got about 1 foot tall and set seed but little was viable. 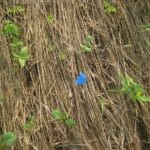 One issue we had was poor stand establishment (photo #1 at right). I attempted to do a stand count to compare the number of plants per acre to the number of drilled seeds per acre but I had a difficult time distinguishing rows and gave up. I do not know if the poor stand was due to operator error (I had a hard time seeing where I had been when I established this seeding), incorrect drill settings, poor germination through the rye mulch, or some other factor. The field never looked particularly sparse but that is partly because the volunteer buckwheat filled in the gaps (photos # 2 [July 3], #3 [July 10], and #4 [July 25] below).

One lesson learned was not to skimp on fertilizer. We thought by including ample legumes in the mix (soybeans, cowpeas, and mung beans) we would provide some nitrogen in addition to what we imported via the chicken litter in March.  The chicken litter provided about 46 lb of N/ac but I collected some soil samples in this field in late July just before it was grazed and found 0-6” soil nitrate-nitrogen levels to be about 11 lb/ac. The lack of nitrogen was evident in the plants as well- the entire field was pale green initially but gradually improved with time (photo #5 below). 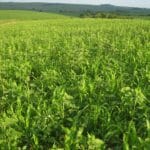 A tissue analysis from some sorghum-sudangrass plants in a comparable field also showed deficient N. Without a doubt we did not spread enough chicken litter, but some of the N shortfall may have been due to leaching (high June rainfall), the N may have been tied up by microbes breaking down the belowground rye residue, or the release of the chicken litter N was too slow to benefit this year’s crop (or probably all of the above). 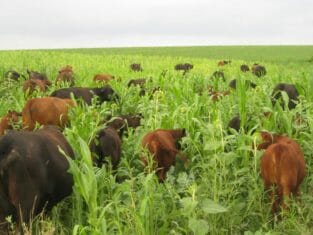 The cattle grazed this field during the first half of August- approximately two months after drilling- so it had plenty of time to grow. I generally moved the cattle twice per day to minimize trampling. While they were in this field (as well as the next field of warm season annuals) the cattle were always able to consume as much as they desired (photo #6 at right). The forage in the rolled rye field yielded approximately 34 animal-days per acre. The other field yielded slightly less (no rolled rye, no chicken litter). Given seed cost of approximately $30 per acre this made for very expensive feed relative to our perennial cool-season pastures which produced substantially more forage with zero fertilizer and seed cost.

The average daily gains (ADG) for the current-year calves stayed acceptable whether on perennial cool season pastures or on warm season annuals. I would have liked to have seen a significant increase while they were grazing the annuals. The consistent rates of gain are likely due to the calves still being able to nurse. On the other hand, by August the cows were past peak lactation and the calves were consuming significant amounts of forage, so maybe the forage kept gains high. ADG for the yearling steers and heifers was disappointing. The middle period (see table) was acceptable but the average rate of gain on warm season annuals was unacceptable. This is hard to explain because the weather was not excessively hot and the animals were never limited on feed. Could it be that they are at a growth stage where rates of gain naturally slow? The highest individual yearling ADG during the third period was a steer who gained 1.7 lb/day. 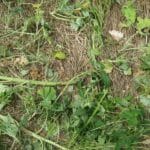 A more positive result was the mulch left by the rolled rye. The residue persisted throughout the growing season and is still present despite being disturbed by both cattle and machinery (photo #7 at left). For the most part the annual weeds were suppressed. Buckwheat- not really a weed in our case- had established under the standing rye and easily grew through the mulch. Other weeds such as hairy cupgrass, various foxtails, Eastern black nightshade, Virginia groundcherry, pigweed, waterhemp, and common ragweed were present but not at levels high enough to cause problems.

In addition to the benefits of ground cover left by the rolled rye, we found abundant evidence of earthworms. I found earthworm castings under every handful of mulch that I pulled back. A high earthworm population is strong evidence of healthy soil and those worms are doing lots of work for us to improve soil pH, produce humus, and improve soil tilth.

Rather than continue to keep this field for annual forage production, Meg and I decided to establish perennial forages on it this fall while conditions were 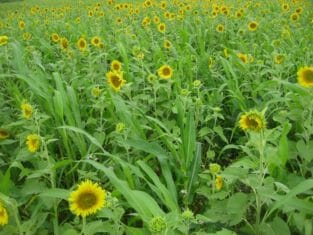 favorable (photo #8 at right). When the cattle finished grazing in this field I mowed it to prevent the annual weeds from going to seed and to slow the re-growth of the warm season annuals. We will sacrifice some grazing on the regrowth of the warm season annuals which could have improved the economic case for warm seasons. Despite the generally poor forage production (likely my fault due to insufficient fertilization) and lower-than-desired rates of gains in the finishing yearlings, I think the benefits of weed control, soil carbon, earthworms, and soil cover merit another attempt (photo #9 below). We will continue to fine-tune our experiment with warm season forages and rolled cover crops on a different field next year. The cover crops in that field are already up and growing. 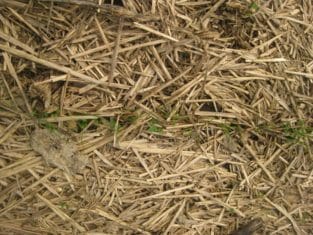