Last fall, when I sought members interested in writing book reviews (as well as general book review suggestions), Practical Farmers member John Miller was one of the first to respond. When “Altered Genes, Twisted Truth” was published earlier this year, by author Steven Druker, John contacted me offering to review the book. While not quite appropriate for our quarterly newsletter book review section, we offered to publish John’s review here on our blog.

The book examines the history of genetically engineered crops and food from a very decisive point of view. Do you have a different take on this book? Is there another book that looks at genetically engineered crops from a different perspective? We invite you to write a review! We’d love to have a Practical Farmers member explore this topic from a different angle. If you’d like to write a review or response to “Altered Genes, Twisted Truth” — or review a different book on this topic — contact tamsyn@practicalfarmers.org. 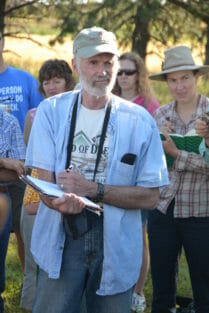 Genetically engineered crops have become deeply integrated into the U.S. agricultural system. Over the past 30 years, these crops – also known as genetically modified organisms, or GMOs – have become the norm in U.S. commodity crop fields, comprising the vast majority of corn, soybean and cotton acres planted. They have also become a source of deep division among farmers, consumers and even the scientific community.

In “Altered Genes, Twisted Truth,” author Steven M. Druker dives headlong into this debate. In his meticulously researched work (the book is over 500 pages!), published in March 2015, he makes a convincing case that, where genetically engineered (GE) crops are concerned, many of the nation’s esteemed institutions, from the media to the court system to the U.S. Food and Drug Administration – the federal agency responsible for approving these crops – cannot be trusted. Druker explains how the initial enthusiasm over the far-reaching prospects of GE crops led the FDA – and other agencies – to ignore warning signs, overlook key details and improperly investigate this new technology.

He writes that, “…the cumulative fraud perpetrated to enable and sustain [GE foods’] commercialization is by far the biggest, most brazen, and most dangerous in the history of science.”

To reach that conclusion, Druker points out that the U.S. Government Accountability Office (GAO), the investigative wing of Congress, has faulted FDA research on GE crops as being “poorly done.” The GAO similarly faulted the U.S. Department of Agriculture, the Environmental Protection Agency, the American Association for the Advancement of Science, and the National Institutes of Health in dealing with GE crops, noting that these groups were asserting the safety of GE crops without proper scientific research to back up those claims.

As a case in point, Druker cites that in 1958, long before any GE research, Congress passed the Food Additive Amendment, which specified that any food additive not generally recognized as safe must be researched, at the maker’s expense, in order to determine its safety in the food system. In the case of GE foods, however, Druker writes that this law was simply bypassed.

Druker then goes into detail describing a variety of experiments where negative consequences of genetically engineered crops were ignored or overlooked. In one study, for example, rats fed GE tomatoes developed stomach lesions, while controls didn’t. Yet the FDA approved the product, stating that the test was so successful, no other testing of GMO products would be needed. In some instances, Druker explains that researchers who raised concerns were fired.

He argues that a similar effort took place to silence contrary news stories: Those that revealed such firings, or negative side effects of GE crops, were squelched – particularly by Fox media. In some cases, Druker writes, the reporters themselves were fired if they demanded that their stories run unaltered. This “long-standing media bias in support of GMO foods,” Druker says, makes it doubly difficult for consumers to know the truth of GMO research.

A third prong of the “fraud” in favor of GE crops took place in the courts, writes Druker. He cites a case brought against the FDA by the Alliance for Bio-Integrity in 1998. Judge Kollar-Kotelly, a federal judge, ruled in favor of the FDA, ignoring (not commenting upon) compelling contrary evidence submitted by the plaintiffs.

Within the FDA itself, Druker writes that FDA administrators “propagated their own lies,” even when some of their own research scientists were among those raising concerns about GE foods.

Druker argues that these – and other – instances reflect a widespread bias, including among scientists, that emerged in favor of GE technology. As a result, he believes “this technology has never been adequately researched.” He finds that research into GE practices has at times “systematically disregarded significant facts . . . and repeatedly breached the laws of logic.”

Thus, today, health consequences of consuming GE foods are to a large extent unknown. And since proponents have lobbied heavily against labeling of genetically engineered foods, very few of us know when we are consuming food with GE components.

Druker also dissects one of the pro-GE arguments: That these crops reduce the need to spray pesticides and herbicides. After several initial years of reduction, “we are now seeing an increase in their use,” he writes, and the rise of “super weeds” and “super bugs” that are resistant to these chemicals.

While a significant part of the book focuses on debunking the claims and research put forward in support of GE crops – and the institutions he argues colluded – Druker does spend a chapter considering an alternative scenario, and issuing an appeal to readers. He believes labeling laws aren’t the path to follow, because they don’t go far enough. Instead, he argues that, because of “the serious health consequences” of GE foods, the U.S. government needs to ban them entirely, while moving the U.S. food system toward sustainable agroecological methods.

While not a quick nor an easy read, “Altered Genes, Twisted Truth” tells the back story to how genetically engineered crops so quickly came to dominance, and what every PFI member needs to know about GE processes.

My personal take is that every American can benefit from knowing the information presented in this book. In fact, it has international implications. Having read it, I see why Jane Goodall in her foreword writes, “Steven Druker deserves at least a Nobel Prize.” Get the book. Read it. Decide for yourselves – and pass it on to your friends. For further information, Druker has a website: www.alteredgenesetwistedtruth.com.

Please note: All views expressed in this review are the personal opinions of PFI member John Miller, and do not reflect Practical Farmers of Iowa’s stance on the topic. Practical Farmers welcomes everyone, and has a broad membership base, and thus takes no position for or against genetically modified crops.