Jack Boyer farms near Reinbeck in Tama County and has been using cover crops the past six years. As he’s gained experience, Jack has conducted strip trials on the farm. This year, he wanted to know if one could establish a cover crop earlier in the season, have it go dormant under the corn canopy, and then have it take off again when the corn begins to senesce late in the summer and after the corn is harvested in the fall. He started an on-farm research trial in PFI’s Cooperators Program to test this idea. The objective was to quantify the persistence and biomass production of a cereal rye cover crop that is seeded into standing corn at the same time as side-dressing nitrogen fertilizer (early June). The Research Protocols for the project can be found here.

On June 10 when his corn reached the V4 stage, Jack interseeded a cereal rye cover crop at a rate of 56 lb/ac. He used an implement of his own design to seed the cover at this point in the season: a Valmar air seeder mounted to a DMI anhydrous ammonia applicator.

When we were at Jack’s farm a month later for a field day he hosted, we were able to observe the growth beneath the corn canopy. On this day (July 8) the cereal rye seedlings growing beneath the corn were approximately 4-5 inches tall.

A little over a month later, however, Jack checked on the experiment’s progress only to find thin and brown cereal rye remaining in the corn. 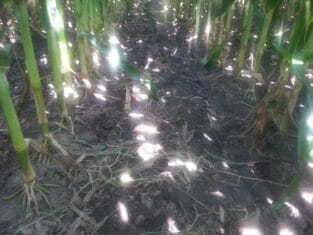 By Aug. 14, cereal rye was thin and brown beneath the corn canopy.

By September 8, Jack found no cereal rye left in the field; it did not survive beneath the shade of the corn canopy.

“I believe that the corn was unusually tall this year (>10’) and that made it exceptionally dark under the canopy,” Jack speculates. “Where I had an old building site, the corn was shorter and seeding did survive. However, that area was not part of my ‘official’ trial area… the corn was only 7’-8’ tall in this area.”

Jack now looks to the future of this project: “I would like to find a method that will successfully get the cover crop off to an earlier start. At this moment I am not sure what I will try next, but will spend some more time researching this winter and see how some others that I know that tried it turn out.”