Laura Krouse has been farming at Abbe Hills Farm since 1988, and for the last 20 years has run a CSA with twice-weekly pickup at her farm for 200 families. Her field day was a tour through her fall crop fields, where she grows a variety of kale, arugula, bok choy, lettuce, cabbage, beans, squash, radish, turnips, beets (and more!) without covers (or cultivation!). Introducing her field day, she said:

“It was looking to me like beginning farmers thought they had to have a hoophouse to be successful. And the EQUIP program made it even more attractive. But the problem is they don’t really know what to do with them and can end up with more debt and stress than they need. I thought maybe we old folks, who have hoophouses now, had given the young folks the wrong impression. No one ever used to have a hoophouse, and we always grew in the spring and fall without hoophouses. So I believe you can do it. A hoophouse is fabulous, no doubt. But if you don’t have the money, spend your money on some good tools and look for other ways to extend your season.” 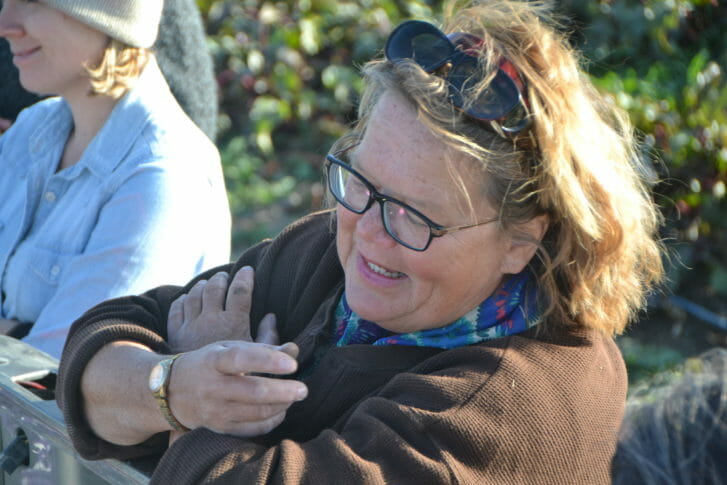 Laura describes fall crops as the same as spring crops but more fun. Without the weeds (they know it would be suicide to start now) or all the other pests. Laura had several field tool for participants to see and try, but, she said, “There is no hoe. I don’t hoe this time of year.” 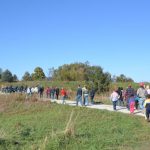 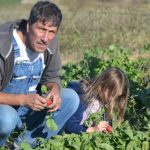 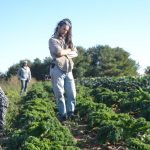 Laura provided an Abbe Hills Planting Guide to attendees with seeding, transplant and harvest dates she goes by for Abbe Hills Farm.

Her notes to accompany the guide:

“The dates on this planting guide are pretty good estimates, but not absolutely firm.  It depends on the season, conditions, etc.  But it is a good place to start thinking about growing crops for the fall season.

I always choose the varieties with the fewest days to maturity for fall crops (spring, too, most of the time), to make sure that they will have the time they need.  While September is usually quite hot, the hours of daylight are diminishing and night temperatures are dropping, both of which slow growth rate.  Sometimes crops in the fall take more days than the catalog says they should.  For most crops, I give myself five days more than I would in the spring to get the same growth.

The “seed by” dates are the latest I would plant.  Many things could be planted earlier, and should be planted multiple times for continuous late summer and fall harvest.  Spinach doesn’t like to germinate in hot soils, so it is one that might have to be put off until as late as possible.

Some crops that have a “transplant date” could also be planted by direct seeding.  Lots of crops that we plant as transplants in the spring, we direct seed in the fall for harvesting from beds.

“Harvest after” dates are based off the latest possible planting date.  Harvest could be earlier if planting is earlier or the fall is warm and/or moist.  Some things, like brussels sprouts, are better if they are harvested in the cold, so I don’t go after them until we have had some frosty nights.

The “harvest by” dates are the average dates when we’ve usually had enough cold weather to damage the crops beyond marketability.  Sometimes that happens sooner, sometimes later.  Some crops, like squash, need to be out of the field before frost for best storage life.  Most fall crops, however, can tolerate a few cold nights and be fine, sometimes even better tasting.

Eaters love sweet potatoes in the fall, but they didn’t make my list because we have nowhere to cure them after harvest.  They need to go into a warm and humid room, I think.  I’ve got nothing like that around here.”

Laura has a great attitude about taking risks with her fall crops. She tried a late carrot this year…

Laura, standing next to a row of carrots: “I was assured by TD (Holub) that if we planted carrots by August 25 we would have carrots to eat. So let’s see!” (Susan Jutz breaks out the broadfork, instructs a bystander to “set it down and jump on it!” A short discussion ensues of the best broadfork crafter, noting the biggest problem with the broadfork is you can break the handles off – same as with a digging fork. So quality is essential.)…. Laura pulls up the carrots… “TD was correct – you can grow a carrot! But you can’t market it! I’ll listen for that distinction more closely next time,” she said to laughs as people snacked on tiny carrots.  For carrots, Laura likes Mocum and Nelson. Bolero is also pretty good, she says, but it’s a longer season variety. 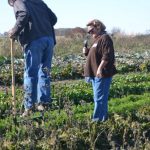 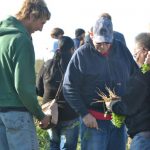 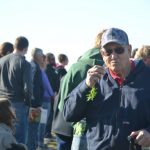 As we walked through the fields, Laura commented on the various crops and varieties she’s using, asking the group for their thoughts, as well.

Early beans:  “I like Contender and Provider, but I also like Strike and Jade. Laura gets a lot of seeds from Jordan Seed in St. Paul – beans, corn, beets; things she doesn’t need to have perfect germination.

Three kinds of cabbages: Gonzales – “customers love them because they’re small, I hate them because they get disease and are too small and weird.” Others: Charmont from Twilly Seed in South Carolina, and Tendersweet from Johnny’s.

Winter squash: “We had to re-seed in the middle of June, which is really late. So I called up Jordan’s and got a 70- and 72-day acorn squash, and they made it. A short-season butternut called Betternut made it, too. We were helped by the warm weather this fall.”

Beets: “I like Merlin and Red Ace. Both from Johnny’s, Red Ace is available from Jordan’s, also. Always a great beet.” 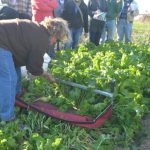 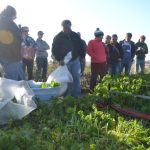 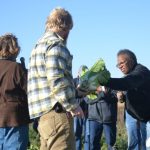 “Red Russian kale. Super cheap – plant it like a carpet and cut it off early for a salad mix. When it grows up it’s good as regular kale, too.”

“Arugula: I plant arugula about every 10 days. We don’t grow arugula in the spring because it gets too many bugs and it bolts. I really load up in the fall. Another seed I get from Jordan’s. (This is a little bit stemmy – a lot of people don’t like it at this stage of maturity).”

“This is a white salad turnip, it’s either Hakurei or Polar; I can’t tell them apart. I planted this with the Jang when I got my new plates – the Earthway can’t handle these small seeds – it plants too many.”

“Yukina Savoy- a kind of a tat soi. Not too spicy, not too dull. Cook it, eat it raw. I don’t grow spinach in the fall, but this is the replacement that people really like. In the spring we plant them as individual plants and they grow about 12-in. Johnny’s has a new one that’s called Koji… but I’m not convinced it’s as nice.”

“Tokyo Bekana – great color, otherwise doesn’t stand out. Better than lettuce, but I’m not yet convinced to unhate it.”

“Bok Choy: Joi Choi and Win Win. My experience with bok choy is that they don’t take the cold very well.” 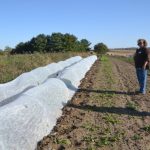 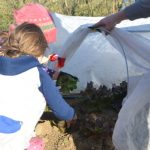 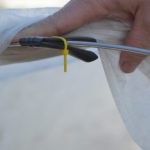 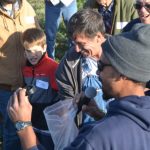 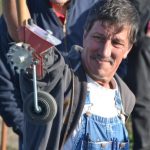 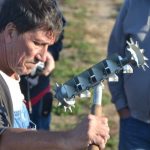 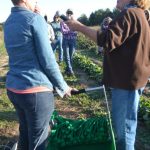 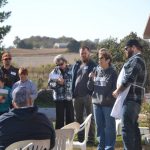 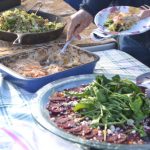 Nearing the end of the field day, attendees gathered around the back of a pickup to check out various seeders and harvest tools, including an Earthway Seeder, Jang Seeder, seeding plates for small seeds, a single row seeder, and a six-row seeder. Laura demonstrated her parsley knife, and Bonnie Riggan discussed the pros (some, so far) and cons (a few more) of the drill-powered micro-greens harvester she’s trying out.

At the end of the field day, attendees enjoyed a delicious spread provided by Chef Mike Short of Cornell College Bon Appetit. Johnny’s Seeds donated a 46″ greens harvester to be raffled off during the field day, which was won by Tim Harapat, who farms with Bonnie Riggan. They are thrilled to have the new tool for their greens.

Thanks to sponsors Bon Appetit and Women, Food and Ag Network (WFAN) for their support of this field day.