Since 1987, the Cooperators’ Program has been Practical Farmers of Iowa’s vehicle for conducting on-farm research on the issues and concerns deemed most important by our members. The Cooperators’ Program is the epitome of what PFI is all about: Farmer-led investigation and information sharing. In 2015, 63 farmers took part in 35 research projects on farms across the state spanning the field crops, livestock and horticulture program areas. On Dec. 10-11, over 50 farmers gathered in Ames for the annual Cooperators’ Meeting to discuss completed on-farm research projects and design new experiments for the coming year.

“To be a philosopher is not merely to have subtle thoughts, nor even to found a school, but so to love wisdom as to live according to its dictates…” –Henry David Thoreau 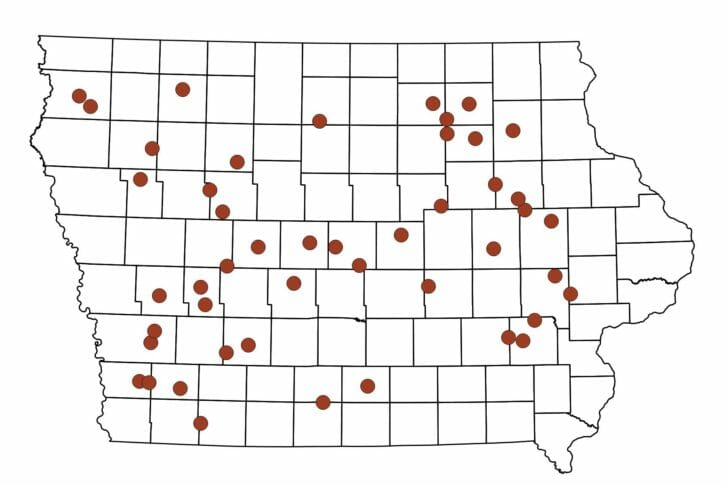 63 farmers participated in 35 projects across the state in 2015.

Jill Beebout, who farms with her husband Sean Skeehan near Chariton in Lucas County, set the stage for the meeting in her opening remarks: “As humans we pay attention to things that we don’t understand, that are outside of our normal experience. The observation of a problem or ‘something unusual’ is often the start of a field trial.” Jill went on to explain the PFI’s Cooperators’ Program as a formalized framework within which to process and report newly found information. She told the group that this framework makes all the difference because sometimes, as farmers, it is difficult to complete a rigorous, well-designed experiment all on one’s own. “The opportunity to share and learn from others is always better than being a sole outlier.”

In each of the three program areas, we heard presentations from farmer-cooperators who completed trials in 2015.

NOTE: Several project reports are still being completed and some projects are yet on-going. Look for these reports to be released in the next few months here: https://www.practicalfarmers.org/farmer-knowledge/research-reports/

The Cooperators’ Meeting is very much a working meeting for those attending. Upon hearing about the completed projects, farmer-cooperators were tasked to identify knowledge gaps, pose new questions and ultimately design projects to explore these topics in the coming year.

Jon Bakehouse, who farms near Hastings in Mills County, delivered the meeting’s concluding remarks. “As you are driving home this afternoon, take a minute. Stop and think about everything you’ve learned over the last 24 hours: the farmer-led research and the information sharing, how both of those strengthen your farms.” Like so many in the group, Jon views the results generated by all the farmer-researchers as essential contributions to the PFI community. Echoing some of Jill’s remarks, Jon summed things up: “For each of us to succeed, we need a community working together.”

Photos from the two-day meeting can be viewed here: https://www.practicalfarmers.org/news-events/events/cooperators-meeting/