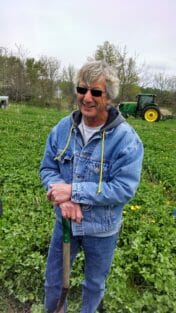 Dick Sloan standing in a strip of red clover in May.

Extending and diversifying a crop rotation to include a small grain presents farmers with the opportunity to generate biological soil nitrogen using forage legume(green manure) cover crops seeded in the spring and summer.

The findings of this project are presented in the new research report: Corn Following Green Manure Cover Crops Established with Small Grain.

Among the key findings of this project:

This project is supported in part by the Iowa Department of Agriculture and Land Stewardship, Division of Soil Conservation, the Leopold Center for Sustainable Agriculture and the Walton Family Foundation.