For the past several years, roller-crimping a cereal rye cover crop before a summer vegetable cash crop has been attracting interests as a research topic at the Practical Farmers of Iowa Cooperators’ Meeting. A roller-crimper is a specialized tool designed by the Rodale Institute that, once the cover crop nearly reaches physiological maturity, simultaneously terminates a living cover crop and converts it to a mulch layer. Often a planting implement follows it. Mustard Seed Community Farm does not own a roller-crimper, but wanted to test a different way to terminate a cereal rye cover crop. This experiment compared the effect on summer squash yield of two different ways of terminating a winter rye cover crop. 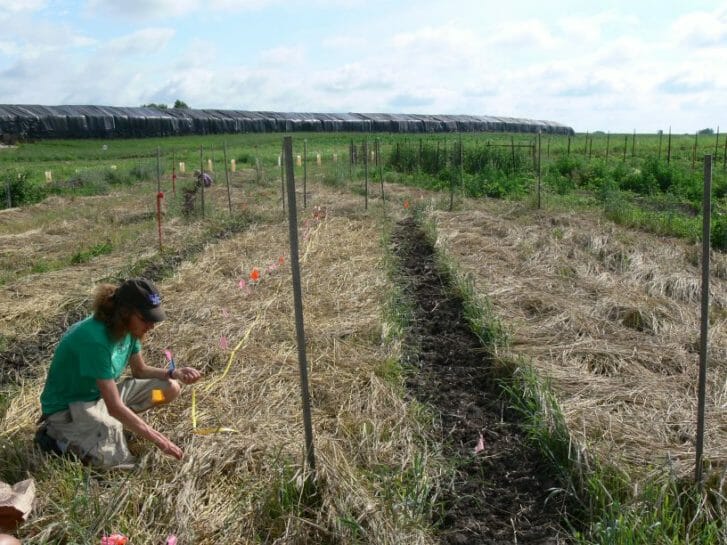 Treatments were:
1. Till a two-foot strip down the center of the bed, then scythe remaining rye at maturity (Till).
2. Scythe all rye at maturity and plant directly into straw mulch (No-till).
The members of Mustard Seed Community Farm wanted to test these methods before implementing them into the farm’s production. These two cereal rye termination methods were chosen because they mimic their normal operations of seed preparation for various vegetable crops. For some crops, seedbeds are tilled prior to planting while others are no-till planted. Including the mulched cover crop to their production system with the no-till treatment would mimic the straw they would normally use to control weeds.

• Squash yield (lb) and number of squash produced were greater in tilled plots than in no-till plots.
• Weeding the tilled plots took significantly more time during the first weeding of the season (July 8).
• Survival rate of seedlings was not different between treatments on July 1, but plant survival by Sept. 25 was 72% in the till plots compared to 50% in the no-till plots.
• Average pounds of squash produced per plant were not significantly different between treatments.
Full Report 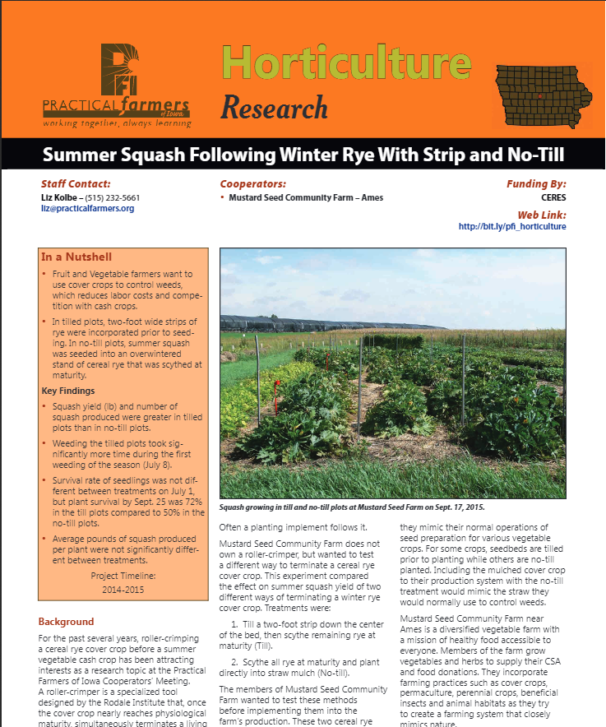