Cultivation of cereal rye for cover crop seed offers the possibility of frost-seeding a legume into the standing rye crop in early spring, where the legume can produce biomass and fix N following rye harvest. In 2014, farmer-cooperators Tim Sieren and Dick Sloan grew corn in rotation following cereal rye frost-seeded with red clover and compared this to corn grown using synthetic N fertilizer applications. Tim and Dick invited Iowa State University graduate student Will Osterholz on to their farms to quantify N uptake by corn as well as two measures of N release from soil organic matter: net N mineralization and gross ammonification.

This project measured soil N availability in the corn year of the rotations and sought to determine when in the growing season N is cycling from the red clover. The results can be found in a new report: Timing of N Supply to Corn from Spring Terminated Red Clover. 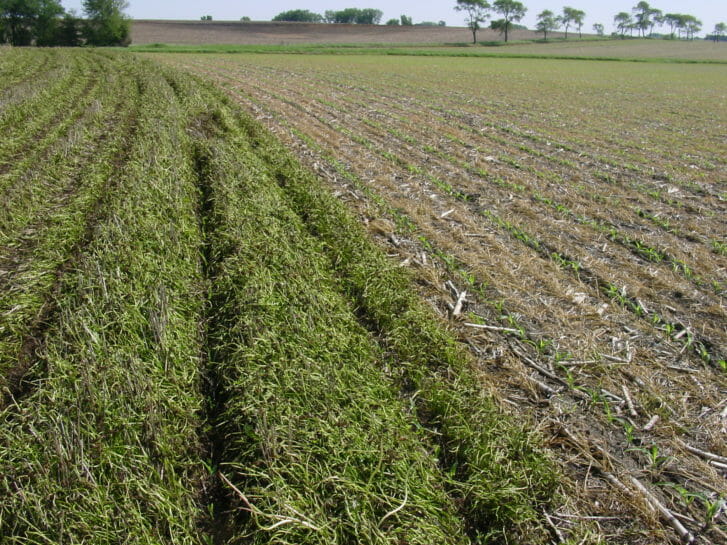 Among the Key Findings:

Between the August and October/November sampling dates, the corn plants in the red clover treatment gained more N than the corn plants in the synthetic N treatment at both farms. These results do suggest that any reductions in yield in the corn following red clover are not due to lack of soil N later in the summer. Rather, N limitation likely occurs early in the growing season before the decomposition of the clover biomass can release substantial plant available N. Management that attempts to address early season N limitation following spring-killed red clover may help overcome the corn yield hit observed in these on-farm trials.

Read all about it here: Timing of N Supply to Corn from Spring Terminated Red Clover.