Vegetable Farmer Tweens are Planning for their Future 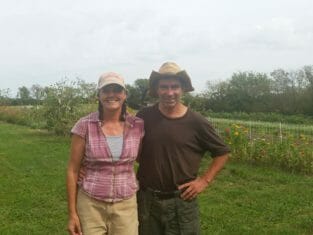 Rebecca Graff and Tom Ruggieri own and operate Fair Share Farm near Kearney, Missouri. For Tom and Rebecca, the answer to the oft-asked question, Can you make money raising fruits and vegetables? is Yes! Rebecca: “We make enough money to pay all expenses including labor for two employees, and are able to pay ourselves a livable wage.” They are established and profitable, yet thoughtful in continuing to evolve the farm to adapt to their maturing interests and bodies.

Rebecca and Tom met through Elizabeth Henderson’s Peacework Organic CSA in New York. Rebecca had been doing community organizing in San Francisco, moved into a house that served as a CSA drop off, and became a member. “During this time, I began feeling overwhelmed by living and working in the city. I started reading my CSA’s newsletter. It got me thinking about my family farm in Missouri, and how the community organizing I was doing could transfer to my own CSA.” This prompted Rebecca to intern at Elizabeth Henderson’s Peacework Organic CSA in New York. There she met Tom. At the time Tom was an environmental engineer, something that was not fulfilling to him: “I never really got into it—it was a corporate job, cleaning up other people’s messes, navigating all these man-made rules. When I was working my desk job, I’d stare out the window at people going down sewer holes doing manual labor, and wish I was doing that instead of sitting at a desk.”

Tom and Rebecca decided to move together back to Rebecca’s family farm and start a CSA. In 2003, they raised vegetables and sold to farmer’s markets while they got their bearings. They started their CSA in 2004 with 25 members. In 2015 their CSA consisted of 137 members. 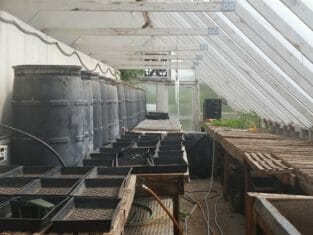 Inside of Fair Share Farm’s greenhouse they built in 2004. The greenhouse is built into the north side of a hill, using a design from Missouri Extension’s Mt. Vernon Research Station. They modified the plans to make it taller, so they could grow starts on tables. Black barrels filled with water and the insulated north side provide heat retention and conservation. They only use heat mats for supplemental heat to get the starts going.

Tom and Rebecca have been building and remodeling farm structures since day one. Rebecca: “The house and the barn were in poor shape we they arrived. We built a greenhouse in 2004.  In 2014 we had an equipment barn built so that we could move all of the dirty stuff: tools, tractors, etc. out of what is now the kitchen.” They most recently renovated an old tobacco barn on the farm into their packing and washing area plus a commercial kitchen. Their nearby farmer’s market in Kansas City has a commercial kitchen, and in 2015 Tom and Rebecca used this space to ferment products they then sold at market. Tom: “We really like the idea of fermentation. You don’t have to spend a lot of energy to add value and preserve produce.” However, it has not been ideal to ferment off-site. While not labor-intensive, fermentation takes time and it is important to check on products regularly.

A licensed commercial kitchen at the farm will increase convenience and allow them to scale up production of fermented foods. At first Tom ad Rebecca believed fermented foods fell into the jams and jellies category. However, as things progressed, so did the certification process. Rebecca says, “While originally we understood that fermented foods fall under the cottage law, we are now going through the process of writing a HACCP, so things have gotten a bit more complicated than we had hoped.” 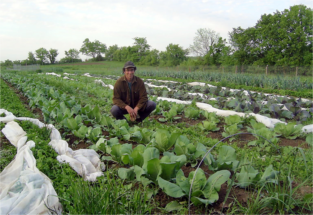 Rebecca and Tom are putting in plastic wall boards, septic, bathroom, handwashing station, cold storage, and sinks for washing produce. They are not putting in a stove, since they don’t need one to ferment.

Fair Share Farm plans to increase fermentation sales through their CSA (they send a bulk order list to CSA customers), farmers market, and local grocery stores. Tom says, “Fermentation is a way for us to transition into some work that is less physically demanding as we get older, down the road. Also, logistics of CSA can wear you out. You have to have all these items for all these people every week.” CSA does not only demand a rigorous growing schedule, but also ongoing coordination delivery, communications, marketing, and many more pieces of the CSA puzzle. 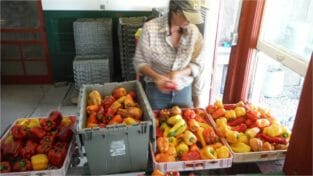 What will happen to their CSA as they increase fermentation? Rebecca says, “If we find the right person, we’d like to keep the CSA going. The membership wants it to continue. We have a core group and dedicated membership. Our CSA is a traditional model, everyone comes to the farm and is involved. It would be nice to preserve the community we’ve created.” Rebecca and Tom realize finding someone to take over some of the major duties. “A fellow CSA farmer I respect told me he’s going to have a really great auction when he retires. He said ‘Nobody wants to come in and be your progeny.’ We have hope: I would love more than anything to find the right person that could keep the CSA going for the next generation.”

If they don’t find someone to take ownership of some portions of CSA operation, they still plan to ramp up fermentation. Tom: “In five to 10 years, perhaps we’ll decrease CSA size to 75 members and ramp fermentation business up to create the same income we have now. We’ll see.”

Either way, fermentation is in the cards for the future of Fair Share Farm.